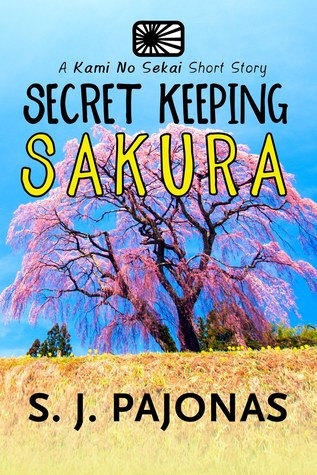 Blurb:
Keeping secrets is this cherry tree’s job. But when Mieko’s mother dies of a stroke, Mieko must face harsh truths.

How will the tree divulge her mom’s past without breaking its vows?

My Review:
I received a free copy of this book and voluntary reviewed it

Secret Keeping Sakura is the fifth and last book in Pajonas her Kami no Sekai series. This was another great read. It’s short enough that I could read it in one sitting and I think there’s something satisfying about being able to read a book in one sitting. Secret Keeping Sakura is about Mieko, her mother just died and Mieko is back in her hometown for the burial. It’s a bit of a sad read with the topic of her mother her dead and it deals with some other sad topics, but overall I still found it to be a hopeful and uplifting read as well.

It’s about keeping secrets, how well you really know people, the different lives you life and making choices. I enjoyed how Mieko learned more about her mom now that she was dead and along the way I feel like she got to understand her mom better. The Sakura tree gives her some hints of where to go and there she discovers part of her moms life and the secrets she kept. I thought it was very well written and Mieko her mom seemed like such a nice character, I really admired her and she seemed like a great person. In a sense it reminds me of some cozy mysteries where you only get to know the victim when they’re dead. That was the main plot of this story basically, how Mieko gets to know her mom better now that she’s dead. And at the same time these would be things she wouldn’t have discovered otherwise.

It was a quick read, but like the other stories in this series it managed to tell the story it’s meant to tell without feeling rushed. The ending is a bit of an open one, which means the reader can fill in the ending. I am not a fan of open endings usually, but this one worked and I do think it ended at the right moment. And it left me to imagine what would happen to Mieko next and I like the image of the future I have in mind for her.

Secre Keeping Sakura is told from alternating points of views from both the sakura tree and Mieko. And while they are the narrators, I felt it was the story of Mieko her mom as well. We get a good feel for the two narrators and Mieko her mom. The tree seemed to care about Mieko and it was interesting to get a feel for how the tree experienced life and what he/she has seen. Mieko took the obvious path that many young people take in this small town and moved away from her hometown to work at a law firm and only now she’s wondering if she’s happy and what she wants from life. Now with her mother’s death she starts thinking about her own life a bit as well.

To summarize: Secret keeping Sakura was an enjoyable read. It’s not as plain fun as the other ones, but it was a great story. It’s about Mieko who’s mom had died and now Mieko finds finds out more about her mom and her secrets. It was interesting how throughout the story we got a bit of a feel for Mieko her mom and she seemed like a great person. The book manages to deal with sad topics, but also feels uplifting and hopefully at the same time. The ending is pretty open, but it works and leaves the reader to imagine what happens to Mieko next. I really enjoyed this one. This series is great when you’re in the mood for a quick and enjoyable read!

Want to give this series a try? If you sign-up to the author her newsletter you get the box set with all 5 stories for free!

What’s the last magical realism book you read? Do you like the genre?