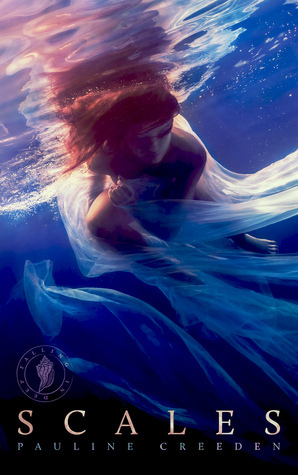 Blurb:
Verona is a bottom feeder. She is the one mer in her clan who is considered the ugliest and least intelligent. Growing up with the constant bullying and abuse wasn’t the worst of what her kind had in store for her. At seventeen years old, she must now endure “The Reckoning.”

The scales will measure her worth to her clan. Will she endure thirty days as a land-walker to gather information and knowledge to appease her clan and return a valued member? Will she wait three years, until she is twenty, and find a mer of her kind to accept her and marry her? Or will she suffer exile for the rest of her life?

My Review:
I bought the Falling in Deep collection as I enjoy mermaid stories. Having already read two of the stories in this box set I excitedly started reading the rest. Unfortunately Scales didn’t work for me, maybe because I was expecting more or had my hopes up, but I felt strangely disappointing. It’s a short novella, but I struggled through it at times, the only reason I finished it was because of the length. This book was pretty boring, not much happens and it couldn’t keep my attention. It was just interesting enough that I did continue in hopes it would improve.

Verona is a bottom feeding, which is sort of like the weakest and most stupid mermaid of the clan if I understand it correctly. At the start of the book she get hurts by her fellow Mer’s and is left alone. She has three choices, go on land, survive three years alone or marry someone. I have no clue how she was supposed to find someone to marry while in exile. Most of Verona her days are spent trying to learn how to catch fish, recovering from her wounds, interacting with the horses and watching television.

I had a hard time connecting or relating to Verona and we learn very little about mermaid society and culture. The only thing we learn about the Mer’s is how they treat bottom feeders, which was pretty despicable, Veronca got bullied a lot even by the teachers and I did feel sorry for her. It’s a wonder she was still so capable with all the abuse she had to endure. I didn’t get why Verona didn’t choose to go on land, I know her father told her not to, but a month surviving on land still seemed easier than a whole three years in the sea, even though that was familiar. I did like how Verona tried to catch fish herself and do her best to survive. Then there is some romance which I didn’t really feel or maybe it’s still supposed to build I don’t know. the ending was pretty sudden and didn’t wrap anything up. I am not sure if this is supposed to be part of a series or that the ending is supposed to be this way.

To summarize: I really wanted to like this book, but it didn’t work for me. It couldn’t hold my attention and nothing much happened, the plot moved along very slowly without any direction and then the ending was very sudden, making me wonder if this is the first book in a series or if it is supposed to end this way. I couldn’t really connect to any of the characters as we simply don’t learn enough about them. I also had hoped we would learn more about the mermaid culture, but the story mostly focuses on Verona trying to survive. There is a minor sort of romance plot line thrown in that didn’t really worked for me.

What’s the last book you read that didn’t work for you and why?