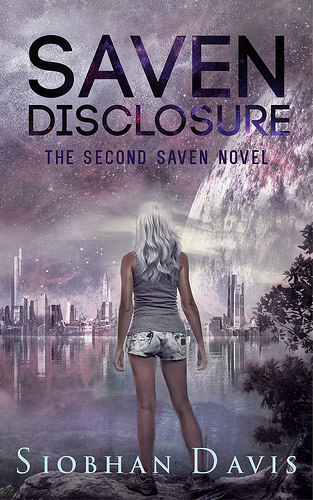 While I enjoyed the first book in this series, the second book takes the series to a whole new level. It had my attention from the first page and didn’t let it go. The story has a nice pace and there’s a lot going on. And the foreshadowing is pretty brilliant, it’s one of the things I love most about Siobhan her books and she utilizes it nicely in this book. By the end of the book I had a strong suspicion of what’s going on with Sadie, but still not 100% sure. I am sure we’ll find out in the novella after this. And talking about the end of the book, this one does end in a cliffhanger. I thought it was a good cliffhanger and it makes me curious about what will happen in the next book.

All in all the world, story and characters all get more fleshed out in this book. Things nicely fit together and there are some interesting plot twists. We meet some new characters and see events unfold. I also liked how the aliens play a bigger role in this book and looking back the first book only seems like an intro, the second book is where things really start rolling. Sadie is in a bit of a difficult position at the start of this book, she’s lying to Logan and trying to play both sides and you just know it’s going wrong eventually. Then there are different aliens involved and some alien/ galactic politics and it’s all building up to a big scene at the end of the book that changes everything again.

I liked getting to know the characters more in this book. The story focuses especially on Sadie, Jarod and Haydn at first and I liked seeing how their relationships developed. And then we meet some new characters as well and some other characters really show their true colours. There’s also some interesting developments regarding some side characters and it was nice to see the changes and developments in this week. We also meet some new characters that I liked too, but the focus really is on the story and what’s going on with the aliens, rebels, government etc.

I wasn’t a big fan of the romance in the first book, but the romance did grew on me in this book and it is obvious these two care a lot about each other. I felt their relationship much more in this book, especially towards the end. The first half of the book they mostly spent apart and especially in the second half of the book I got a bit more of a feel for their relationship. I didn’t like them keeping lies from each other, although I did get why they did it. And Logan could be a tad controlling and protective at times, but Sadie had no trouble telling him when he went too far and showed him she could make her own decisions.

The world expands in this book, we get a view of the wider galaxy, other aliens and I really liked getting a more solid view of the world. Although I did have some small issues, like how easy and quick the space travel was or how the teleportation of the Saven works. And the aliens all seem a bit too normal, too human almost, but with a few quirks. I do think the author did a good job of giving each alien race a bit of their own feel though, although I still hoped for more. I still don’t fully like one of the plot points, but it was interesting to see how it developed in this book. There is some galactic politics going on and I have the feeling we’ll be seeing much more of that from now onward. Although ofcourse there is still a lot more that I want to know and some questions that remain unanswered and I hope will be explained in the next book. I am really curious how things will continue and play out in the next book.

To summarize: This was a great sequel and takes the series to a whole new level of awesomeness. I really enjoyed this book and it had my attention from the first to the last page. The pace is nice and Siobhan weaves an interesting story with lots of things going on, politics, character goals and foreshadowing. Character we already met in the first book change and develop in this book and we meet some new characters too. There’s this big thing that kept hinted at and I think I finally know what is going on. We get to know the characters a bit more and also meet some new ones. I also liked how we get to see more of the world and galaxy in this book. Although space travel is a bit too easy and fast and the powers of aliens are a bit strange at times, the author did try and give them all some unique feel. This book ends in a cliffhanger and makes me curious about the next book!

Get the first book for free!