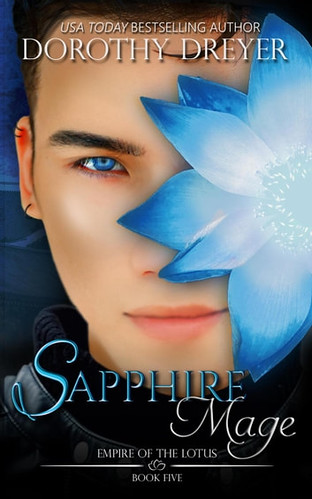 Sapphire Mage (Empire of the Lotus #5)
by Dorothy Dreyer

Blurb:
In the battle to save the world, things have taken a fatal turn.

The elite mages have succeeded in getting ahead of Kashmeru’s shadow army, but now the power has shifted, and the good guys have taken a hit. It’s up to Jae and the rest of the crew to outwit the Pishacha and take back what they’ve lost.

Loyalties are tested and resilience pushed to the limits, as the war continues between the divine and evil.

Sapphire Mage is the fifth book in this series and just like the earlier books it was a great read. There is a lot going on and the pacing is well done. The last book ended in a success as well as some big losses and the mages struggle to stay ahead of the evil guys.

I liked following the mages as they continue the fight and try and stay ahead of the evil guys. After what they achieved in the previous books I was afraid the tables could easily get turned on them, but I liked how they were smart about that and prevented that for now. However they’ve taken some heavy losses and are still fighting to stay ahead and find the final pieces to lock away the evil god forever.

Like the previous books this one again has multiple point of views. The mages do split up more than in previous books and I sometimes struggled to remember what everyone was doing and who was where. I liked how we got to see multiple mages their point of view and also some character development. There are some battle scenes as well as plenty of using their magic to get out of tricky situations. The tension is getting higher now that the comet is getting closer and I am eager to see how it all gets resolved.

To summarize: I am enjoying this series and this was another great read. The mages have suffered some losses as well as successes and they struggle to get ahead. I like how they make some smart decisions to prevent the enemy from turning the tables on them, but it’s still clear they have to do everything they can to stay ahead. This book brings more losses, struggles as well as some things they achieve. We see more of the mages and their powers as well. It was an exciting read and I look forward to see what happens next.