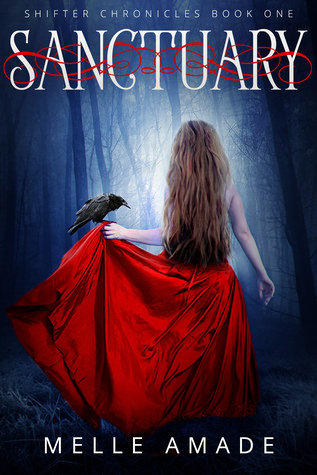 Blurb:
It’s survival of the fittest, but first you have to fit in.

Shae is sure the icy rage that eats away at her is driving away her friends and pulling her closer to the wrong boy. But, as her protected world unravels, she discovers the violent supernatural world that lurks in her quiet hometown and the ancient feuds that threaten to destroy both her friends and her family. To save those she loves, Shae must succumb to her own fury, but at what cost?

My Review:
Sanctuary is a great Young Adult book about shifters. And I really enjoyed reading this one. I got this one a while ago when it was free, but had forgotten about it again until I read one of this author’s short stories in the Marked by Fate Origins set. I really liked her style and wanted to read more of her books. Then I realized I already had one of her books. I had read another short story, Heritage, as well before I started this one. So I had a bit of background knowledge as well, which I think worked well. Some events at the start of the book were less mysterious, but I liked knowing what was going on.

Sanctuary follows Shae, who has a bit of a boring summer as all her friends were on Camp in Europe. Now they’re finally back, but something has changed and they’re acting different now. And then slowly Shae finds out what is going on and discovers the shifter world. As I already read two short stories before reading this book I had a bit of extra knowledge and knew more of what was going on as Shae, but I kinda liked this as it gave me a better understanding of what was happening here.

The introduction doesn’t go on too long and quickly Shae discovers that shifters exist. There are some great twists and surprises in this book and I liked how the author gave an original twist on this genre. The world building is a tad dark. These shifters aren’t all nice, they have a dark and violent history. Shae lands in a difficult situation with no easy solution. There are difficult choices the characters need to be made where they risk a lot.

I really enjoyed this book. It was exactly the type of book I was in the mood for and I found it an addictive read. Before I finished this book I had already bought two more books by this author and I can’t wait to delve more into this world of shifters he has created. I also liked how the author used some dutch words as the Netherlands is a location were part of the shifters live. It was fun to be able to recognize some of the words and it gave a certain flavor to the world and lore. Another part I thought was well done is how there were many different types of shifters, the focus is mostly on a few of them, but from what I understood all type of animal shifters are possible in this world.

I liked Shae as a main character. I thought she felt like a pretty realistic character, she could be a bit impulsive at times and a bit too curious, but I did mostly like her. I also liked how she showed forgiveness later on int he book when she understood another character better. She lands in a difficult situation and she just wants to know what happened with her friends and then when she discovers the dangerous world of shifters she has some more difficult choices to make. I also liked getting to know her friends and while at first they seemed distant and cold, eventually it makes sense why they acted that way and I think they showed their true colors later on. And I grew to like them all even more then.

There is a bit of drama and angst, but that mostly is related to the plot. There is a set-up for romance or even a possible love triangle, but it stays mainly to the background. I wouldn’t have minded a bit more attention to it, but with everything going on it also made sense they didn’t have time for romance or talks at times. It mostly stays with a few kisses and some conflicting emotions. I also appreciated that Shae tried to do the right thing, even though it was difficult.

To summarize: Sanctuary was a great read! It gives an original twist on the shifter genre and it was an addictive read. I liked reading about this world, were shifters exist, but there is a lot of darkness too. The shifters have a dark and violent history, lots of rules and many shifters aren’t likeable at all, but they did all have their own motivations and their actions made sense. But there are also some very loyal and caring shifters among them. This book had some great twists and I am eager to see how the story continues and to learn more about this world. I thought the world building was well done and it gave the world a unique feel. I liked the few dutch words the author used and how all types of animal shifter seemed possible. The characters were fun to read about, the world seemed unique and the story kept my attention. All in all a great read and I hope to return to this world soon.