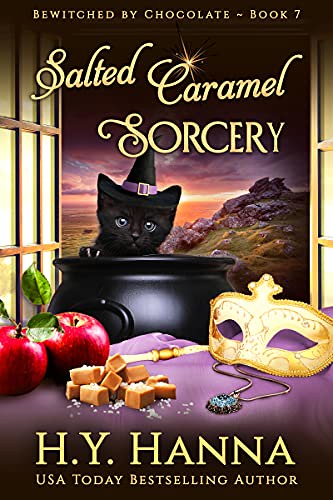 Blurb:
The autumn equinox is here, and Caitlyn Le Fey is excited by the upcoming masquerade ball to celebrate the festival of Mabon. Not only is it a chance to dress up in glamorous costumes, but—with the Widow Mags catering—the villagers might finally put their prejudices aside and appreciate the delicious treats from her grandmother’s chocolate shop. What’s more, with the dreamy music and romantic dancing, Caitlyn might even get her first kiss with the dashing Lord James Fitzroy! But on the night of the ball, Caitlyn barely has time to sample the decadent caramel fountain, or help her old vampire uncle search for his missing fangs, before a guest is brutally murdered. Was he killed by witchcraft? Who was the mysterious woman seen following him? And why did he lie about his identity?

Many at the ball might have wanted him dead, from a jealous ex-lover to an old foe seeking revenge, but to Caitlyn’s horror, it’s her cousin Pomona who becomes the top suspect. Although Pomona has been acting strangely and showing a disturbing interest in black magic, ever since she was given a cursed diamond, Caitlyn refuses to believe that her pretty, bubbly cousin could be capable of murder! With the help of her quirky witch family, a few chocolate spells, and a pony with a sweet tooth, Caitlyn is soon close to finding the real killer. But solving the mystery could also mean facing a shocking truth about her own family and the secrets of her past…

I’ve been enjoying HY Hanna’s books, but after enjoying book 6 less I was a bit hesitant to start this one. Luckily I can say this was a great read in this series. There’s a lot going on besides the murder and I like how we see a bit more of the overarching plot lines and learn new things. It was quite the exciting read and I was curious to see how everything got resolved.

This book starts with the build up for a Mabon autumn festival at the manor. There are some weird things going on, with how a side character related to last book’s dies in the hospital without discernible reason and Pomona is acting strangely. Then at the festival there’s another murder, when hints are found that Pomona might’ve done it, Caitlyn tries to cover for her cousin as she knows she couldn’t have murdered this man. Then there is Caitlyn’s love life troubles a her relationship with James doesn’t always go smoothly. As well as more paranormal stuff that’s going and villager’s who don’t like the Widow Mags. Caitlyn learns a few new things about her her mother as well. This book was chuck full with plot threads and there was a lot going on, all nicely blended together in an exciting story.

The mystery in this one felt a bit less solid than some of them, but that wasn’t a big problem for me as there’s so much else going on. I liked how it was unclear who would’ve done it and it isn’t clear what the motive was either. It was interesting to see how things ended related to the mystery and how there are still more questions remaining. I am curious to see how those get resolved in future books.

While I enjoy these books, there are some things I struggle with. Like the way Caitlyn acts at times. One moment she is arguing with James about the mystery then the next she’s using James word to convince the detective to look the other way. Or how she kept trying to convince herself things Pomona did were just a coincidence instead of trust her own judgement. Then there is the way how she tries to solve some dangerous black magic by herself instead of confiding in other more experienced witches. Or how she hides evidence.

On the other hand I do like how she’s loyal to those she cares about and how she apologizes to James later. I do like how James is shown in a new light now that they have a romance and how he isn’t as perfect as he first seemed and has his own flaws. It makes him feel more human, although at the same time I was annoyed at the way they communicated and hid things from the other in this book.

I liked how heavy on the paranormal this book was. The murder might have something to do with paranormal means or motives. There is some magical things going on with Pomona and there is some we learn about the Mabon festival, poppet dolls and more. I felt like the paranormal aspect of this series got expended upon in this book, although I still have a lot of questions as at times it’s unclear what is and isn’t possible magic wise.

To summarize: This was an exciting read in this series. I liked how there’s a lot going on in this book and I liked reading this book and seeing how everything pans out. The murder mystery was an interesting one where it’s unclear who did it and why, I liked the way the mystery got concluded and how there are still questions left over. It felt that this book focused a bit more on some overarching plot lines and a few things got resolved or improved as well. I do have some troubles sometimes with Caitlyn’s behavior and in other scenes I like how loyal she is to those she cares about or when the honestly talks to people. It was interesting to see how Caitlyn’s and James romance develops, it was interesting to see how James isn’t as perfect as he seems, although I was a bit annoyed how they got in a fight and didn’t see each other’s point of view. I enjoyed this book and am curious to see what happens next in this series!