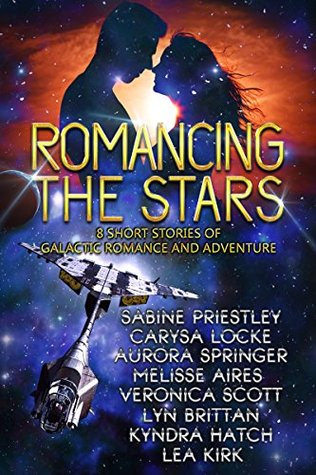 Blurb:
Welcome to Romancing the Stars! With eight short stories of romance and adventure, you’re sure to find a happily ever after. From space pirates to cyborgs, alien planets to psi sex, we’ve got you covered at every heat level.
New to Science Fiction Romance? This collection is the perfect introduction! Lots of romance balanced by sci-fi elements. Strap yourself in, fire the boosters, and enjoy your transport to our futuristic worlds!

My Review:
As this is an short story collection I will review each short story separately and give a summary of the collection as a whole at the end. Half of my reason for picking this up was that it had a short story by Carysa Locke in it (I already read one of her books and was curious about this short story), the other half of the reason was that I wanted to find more sci-fi romance authors.

– Star Cruise Rescue by Veronica Scott
This was a nice short story. I enjoyed how the author build the world with some new terms, although I was a bit confused at whether the ‘lites were aliens or not at first. And the concept of a space cruise sounded pretty cool and realistic. The story takes place on another planet and the female main character gets in some trouble and the male main character realizes she’s missing and goes to search her. Both seemed nice enough, but the story was pretty short. The pace was well done though, although a tad rushed in some places. It was an enjoyable read that makes me curious what the author can do in full length novels.

–Maricar’s Gamble by Lyn Brittan
This one had a very interesting set-up, after a mission that went wrong Maricar decides to get out, so she somehow gets a place into a ship that’s going to a far away planet so she can leave everything behind here. Everyone on the ship has their task and it gets strongly encouraged that they reproduce. Maricar meets her match and they have a conversation. It’s short, but it did caught my attention. Although it more felt like a beginning of a book and the backstory sounded like it could be a book itself as well. This seemed like a pivotal, but short piece in between two books, instead of a real short story. But overall still an enjoyable read and it does make me curious about other works by this author.

–Hunter Bond by Carysa Locke
This was the first story I read as this was the one I was most excited for. I already had read Pirate Bound so I already knew part of the backstory of these characters and I am sure that helped me get into this story without trouble. I really enjoyed this short story. Dem and Sarah now have a kid and something is wrong with her and they can’t figure out what. I felt so sorry for them to see them struggle and then help comes from an unlikely corner and it has a fun twist at the end. We learn of something new we haven’t heard of in the prequel and I can’t get my hands on book 1 fast enough. I am really impressed already by the world and characters these authors have created and I just want more. Hunter Bound was short, but it was well paced and had a satisfying conclusion. And it was an enjoyable read. And I think even for people who haven’t read the novella it can be a fun read, although maybe a bit more confusing then as you know less about the characters.

–Gifts of Jangalore by Aurora Springer
This one didn’t quite work for me. I did like how the author described this alien planet, but it felt like she wanted to convey too much in a short story. The ruins from some civilization we know nothing about, powers that don’t get explained and overall it was just hard to care about anything. The writing felt a bit off and the conversations felt written a bit awkward. The female was a guard, but she was more swooning over the male or being fascinated by her surroundings and the male actually protects her. Although her empathy sounded interesting, I would’ve preferred to get more of a feel from her perspective about it, now it was mostly her telling him what the monkeys felt etc. I didn’t feel the romance and there was little that interested me about this story. It just didn’t quite work for me.

–Cyborg Security by Melisse Aires
The set-up for this story was great and I enjoyed it, but also felt that it should’ve been longer to really explore all the issues and characters. The main characters works in a ship that is observing a not yet space faring planet when one day she comes home to find that her daughter went down to the planet and saved a boy who was being beaten by his parents and then she got betrothed to him. The main character decides to help this boy and agrees they can’t let him go back. This decision is made in a split second and it would’ve been interesting to see more of the mother her thought process about this. I mean her kid just kidnapped another kid from a planet that isn’t space faring. That seemed like quite a big thing and a troubling decision of what to do with the kid now. And how does this boy perceives this weird environment? There was so much potential and I just wanted more. Instead we get a fast paced very story driven book. With some romance thrown in that doesn’t really develop. It was a good story, but I think as a longer novella or novel it would’ve been even better. I did enjoy it and it does make me curious what else this author has to offer.

–All of Me by Lea Kirk
Ehh this one didn’t quite work for me. The story is about an guy in the military who falls in love with a female who is pregnant with the baby of the guy she loved and now is dead. We have a baby being born scene and then a lot of focus on the baby and a romance that moved too fast. And I just didn’t care about any of it. The story was meant to span a lot of time, about 9 months in story time go by, but it just felt rushed to me and like everything happened too fast. I just didn’t care about any of the characters. There is a bit of a sci-fi set-up with some technology and a few lines here and there, but the sci-fi aspect didn’t really came into play a lot. Just the two characters and the baby and I didn’t care about those.

–Aliens in the Barn by Kyndra Hatch
Not quite sure what to think of this one. It’s mostly about a reunion between two machine like aliens and a very weird alien sex scene. It definitely was original, but with how short it was it was hard to get a feel for the world or characters. And there just wasn’t enough time to bring such an unique concept fully to life. I did thought it was in interesting how different these aliens were and how they seemed to be more robotic, but not fully. I wanted to know more about these aliens and how they got on earth and why they lived in this barn. Also I felt a bit sorry for the humans at times.

–Alien Bond by Sabine Priestley
I like the set-up for this one and it was a fun read if a bit short and predictable. Aliens have walked among us and make themselves know, they all are gorgeous and have psi powers. Some of these aliens form a soul mate bond with humans. The main character wants nothing to do with the aliens and definitely wants no controlling band as she just escaped her mother’s controlling tendencies by moving to England. I like the set-up and while it’s a bit predictable it was a fun read overall. The thing that most bothered me is that because it’s so short, the main character her change in mind went very fast and was a tad unbelievable. There’s a lot of focus on lust and a detailed sex scene at the end, which probably makes this one the most hot read of this box set.

To summarize: this anthology had a few hits and a few misses, which is what I expect with anthologies. Overall I had a fun time reading this one, getting a feel for the type of sci-fi romances that are out there and found some new authors to check out. As well as a short story by an author I already knew. And that was exactly what I hoped this anthology would bring me, so I am happy with that. I thought it was a great read for people who are still pretty new to the sci-fi romance genre, like me. And the stories are all very different with different plot lines and fun set-ups. They show different sides of this genre. My main complaint was that these are short stories, so at times they felt a bit short or like there was more that could be explored in a longer read. But that just makes me curious to try some of these authors their full length books. So overall I would count this as a success and I mostly enjoyed this collection.

Do you read anthologies?

12 responses to “Review: Romancing the Stars”