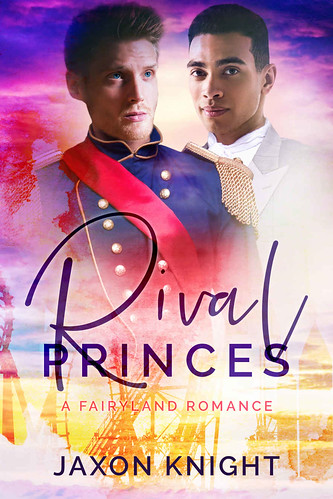 Blurb:
There are three golden rules for new recruits at Fairyland Theme Park:

1. No breaking character, even if you’re dying of heat exhaustion
2. Always give guests the most magical time
3. No falling in love.

Nate’s only been at work one day, and he’s already broken all three.

Fast-tracked into a Prince role, Nate’s at odds with Dash, the handsome not-so-charming prince who is supposed to be training him. Nate doesn’t know how he ended up on Dash’s bad side, but the broody prince sure is hot when he gets mad.

Dash has worked long and hard to play Prince Justice at Fairyland. Now, instead of focusing on his own performance, he is forced to train newbie Nate to be the perfect prince. Nate’s annoying ease with the guests coupled with his charm and good looks could dethrone Dash from his number one spot … so why does he secretly want to kiss him?

Fairyland heats up as sparks fly between the two rival princes. Will they get their fairytale romance before they’re kicked out of Fairyland for good?

Find out in this standalone MM contemporary romance by Jaxon Knight, set in an amusement park where fairytales can come true.

Rival Princes is a sweet Rivals to Lovers romance with queer characters, set in a fairy tale themed amusement park. Guaranteed HEA. Some cursing, no cheating.

This was such a cute and fun romance read. Once I saw this book I knew I wanted to read it, it sounded so fun and the setting at fairytale theme park where both characters work seemed like such an unique setting. I was in the mood for a light and fun read and this book fit that perfectly.

Rival Princes follows the story of Nate and Dash. Dash has been working in Fairyland for a while now, he climbed up from the position at a summer camp to finally the role of prince. He loves his job and puts a lot of effort in it. His careful routine gets broken when Nate gets accepted for the role of another prince. And that without any of the hard work Dash put into it. There is some rivalry between these two (mostly on the side of Dash) and a bunch of feelings as well.

While I normally am not a fan of enemies to lovers type of stories, I thought the set-up in this book was well done and realistic. I could understood Dash’ frustration after seeing someone basically roll into the role of prince, while he had to work so long and hard to get it. And Nate is a natural at the role as well. I do think he took things a bit too far with the rivalry at times and could be quite rude in some scenes, but eventually he realizes that himself as well and there are some complicated emotions underneath his behavior. And I did like how he realizes what really underneath it all and straightens himself out.

While Dash had some moments where I didn’t like his behavior, Nate was a character who was really easy to like all the time. He is so honest and real. He rolls into the role of prince, but never let it gets to his head and he also puts a lot of effort into it to get it right. And when he does something that everyone praises him for he feels awkward as he just did what came natural to him. He’s so real and in the moment, which was great to see. I did really feel for him when his attempts to smooth things over with Dash don’t go as smoothly. But in the end they figure things out, which was great. And I liked how Nate also lets Dash know his behavior hurt him.

The romance doesn’t really develop until late in the book, so there isn’t as much time to see the two characters together after they admit their feelings. I would’ve liked a few more scenes at the end or an epilogue of sorts. I did sign-up for the authors newsletter where there’s an extra chapter or so for these guys, so I hope that will helps wrap things up for me. The romance itself was well done and I like how the chemistry is clear from their first meeting. It does seem to be based on attraction mostly at first, but as the story progresses it becomes clear there are some deeper feelings involved too. I like how they both struggle a bit with how they’re feeling and how they both admit to to themselves and eventually the other. They both have a great friend to help them along as well.

There are some background parts and personal issues for both characters that get touched upon, but this story doesn’t dive into those as deeply. Which seemed to fit the story. Those issues are mentioned, but don’t take up too much space, but on the other hand I would’ve liked to see that get explored more. How Dash deals with letting someone close and How Nate has some hang ups from a previous relationship. Nevertheless I did feel like I got a good feel for both characters and understood why they acted the way they did.

There is a group of fun side characters as well. There is Charlie, Nate’s best friend, who also works in the park. Ari and Greer who play the princesses the guys work with. Greer is also Dash’ best friend. Cody the security guy who gets along well with Nate. The two people who work in wardrobe. Lennon, who is an important member of the staff. They all have their own personality and have some scenes in which they are important.

The fairyland setting was really well done. It’s clear the author has an idea of how thing go in parks like these and the descriptions of it all made me have a good image of what kind of works everyone did and also give an image of this fictional theme park. I thought it made for an interesting and unique setting for a book. And it just was fun to read about. It also lends itself well to some unique scenes while the guys are working. I liked seeing how Nate and Dash did in their roles as princes and there were some fun and interesting scenes with some of the guests as well.

To summarize: this was such a fun read. It’s a sweet romance story between two guys who both work as princes in a fictional fairytale theme park. There is some rivalry and feelings between the two, which both get resolved before the end of the book. The end did feel a bit sudden and I would’ve loved to see a few more scenes of them in a relationship or an epilogue, but I did like how things got resolved. While Dash could be a bit rude at times, I could understand his behavior and why he felt a bit jealous of how fast and easy Nate rolled into the prince role. I liked when he finally figures things out for himself. Nate is easy to file with his real and open manner and how he keeps trying to smooth things over with Dash. There are some issues in both guys their past that get touched upon, but this book doesn’t dive into depth in those issue. I liked the cast of side characters. The fairyland setting made for a fun and unique setting. The author made it all feel realistic and I liked how it added some fun scenes in the park with them being both employees there. All in all I had a lot of fun reading this one and I already bought book 2.

Have you ever read a book set in a theme park?