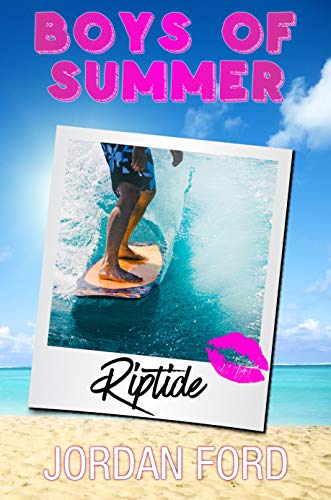 Blurb:
He’s after the ultimate rush. Can an unexpected relationship with a girl he’s never seen stop this adrenaline junkie before he takes things too far?

Jace is a restless soul, seeking to fill the jagged wound inside of him by doing one reckless thing after another—extreme sports, drunken parties, running from the cops. He’s after the ultimate high…the thing that will kill the angst inside of him.

When he’s given a business card promising him the thrill of a lifetime, he takes it. All he has to do is email the guy and apply for this chance, but an email error pulls him into something else entirely—an internet relationship with a girl who might be the only person to truly understand his pain.

Can his sweet, anonymous email buddy be the voice of reason he so desperately needs, or will his family drama tip him over the edge?

Riptide is a Boys of Summer novella. If you like surf, sun and bad boys then you’ll love this adrenaline-filled ride. Infused with sweet romance and heart-wrenching character growth, you won’t be able to put this novella down.

This is a novella in the Boys of Summer series, a collaboration between several YA authors. They are all standalone stories that take place in the same fictional town. Escape to Sterling Beach today!

Riptide is a novella by Jordan Ford. It’s part of the Boys of Summer series, I think they are books by different authors all set in the same beach town, but mostly it reads like a prequel for the next Rydar Bay book.

Riptide is told from the point of view of Jace, also known as Bass. Jace is a thrill seeker. He longs to feel that empty angsty feeling inside of him by chasing the next high, the next rush, the next adrenaline spike. And then one day that search for the next high brings him to e-mail a suspicious e-mail for someone who can give him a bigger high, but he mistypes and ends up e-mailing with a girl called Snap Dragon. Someone who gets him and is there for him, while the whole world seems to not to care about him.

Riptide was a fast read, but quite a lot happens in this novella. We get to know Jace and get a feel for him, see him land in trouble and get to know Snap Dragon. I have to admit I found Jace a bit a difficult to like at first, he longs for the next thrill and rush and doesn’t think about danger, consequences or who he hurts along the way. But then we get an insight in his feelings and how his search for the next thrill is just a way to bury his hurt. It was hard not to feel sorry for him. And I do think he is a good guy deep down, but you only get glimpses of that guy and those glimpses where what I liked. His cover up behavior just made me feel sad and worried for him. The whole book has a bit of a desperate tone at times and also sad in moments, but it’s that glimmer of hope that made me curious.

I loved his e-mails with Snap Dragon. The way their e-mails without knowing who was on the other side gave them that anonymity to share their real feelings and talk about deep topics that they couldn’t easily talk about with those who did knew them. And Jace seemed very lonely in a way and his connection with Snap Dragon became so important for them both. I also liked what we got to see of Snap Dragon through the e-mails, even tough we don’t get her point of view I do feel like we get to know her a bit. I thought this set-up was quite interesting with how he starts to e-mailing a stranger and they connect.

There are also some friends of Jace who were interesting to read about. They seemed quite close and I liked How Jace sought more in Isaac’s behavior and how much he cared for his girlfriend. I also liked his best friend. there is an event later in the book that came as quite the shock. It was quite sad and while I do believe it wasn’t Jace’s fault I could understand why he felt guilty. It was just so sad.

I thought the author captured the teenage emotions very well. There is something so raw about it and it has that vibe that I associate with teenage emotions. It all felt very believable how Jace acted, even tough it hurt me to see him act that way. While the novella does wrap part up, in a way it just feels like the prequel for the real story. It sure makes me curious to learn more about these characters and I am excited to read the rest of their story. The ending place is well chosen, although it isn’t quite a happy ending, it is ending part of Jace’s story and starting another chapter in a way.

To summarize: Riptide follows the character Jace who is always looking for his next rush in a desperate attempt to escape the empty feelings inside. No one seems to care about him and only that adrenaline rush makes him feel alive. I found it hard to like Jace at first, but along the way when we get to see some of the deeper emotions behind his behavior I began to feel for him. There are some sad parts and the book has this desperate and sad feel at times, but also hope. And it’s the hopeful moments that I loved best. The e-mails with Snap Dragon were fun to read and I liked how these two character were there for another and shared quite a bit without knowing each other in real life. This novella feels very much as a prequel and there will be a full length book that continues their story. I am curious to see where it goes next and see the guy Jace will grow into.

Tell me about a book you read with a main character you didn’t like at first, but then grew to like slowly?