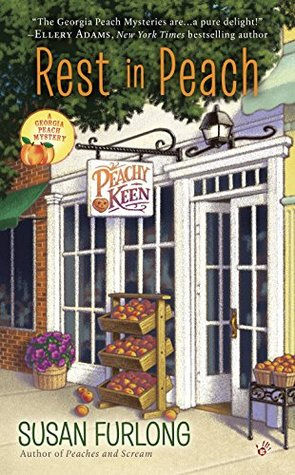 Blurb:
In the refreshing new Georgia Peach Mystery from the author of Peaches and Scream, an upcoming debutante ball turns into the pits when a juicy murder scandalizes a small town.

The annual Peach Cotillion, Cays Mill, Georgia’s biggest event, is fast approaching and Nola Mae Harper is just as excited as the rest of the town—even though she’s busy juggling both the cotillion dinner and the grand opening of her new shop, Peachy Keen. But she never expected that plans for the cotillion would end up in the pits because of the cutthroat competition between local debutantes.

When Vivien Crenshaw, insufferable church organist and despised mother of the town’s spoiled-rotten Peach Queen, is stabbed to death, the police turn to Nola’s friend Ginny as prime suspect. Apparently the two had fought over a one-of-a-kind cotillion gown. As Nola steps in to prove Ginny’s innocence she soon finds herself picking through a bushel of suspects, twice as many motives, and at the mercy of a killer all too keen on killing again.

Rest in Peach was a nice sequel. As I was already familiar with the town and the characters it was easier to get into this book. It has a similar set-up as the first book with the big event planned which will take place towards the event of the book. So the progression of events and build-up was a tad similar to the first one, but the story was very differently, so I still enjoyed it. The peach touched to this story and the events in the book are a fun addition and just like the first book this one had me craving peaches.

The mystery was a nice one, again a tad similar to the first book with the evidence pointing towards someone close to Nola and she doing her best to prove who really did it. I did like the mystery and it kept me guessing for awhile. I wasn’t too surprised when the truth came to light, but also wasn’t sure who had done it before the reveal, so that’s good.

The characters have grown a bit on me since the first book, although I still don’t fully connect with them. I like Nola and how she’s always there to help her friends. And I liked the plotline with her setting up her own store and I am really curious how that will progress in the next book. I also liked the sub plot lines surrounding Nola her friends. I feel like we’re getting to know the characters in this small town a bit better and even meet some characters we didn’t see (much) in the first book. I quite liked Clara and there are some interesting reveals and plot lines involving some side characters.

Then there is a hint of romance, which worked. Like most cozies the romance really stays a side plot, so it’s hard to fully get into it. After the previous book I had expected things to progress more in this one, but it didn’t move a lot. Cade and Nola have some troubles they need to figure out and things they need to tell the other.

The peach element and focus of this series is one of the highlights of the books and it’s fun to see how the author weaved the topic of peaches naturally into everything. With Nola her peach shop, her parents their peach farm, their neighbour who makes peach drinks and then the Peach Cotillion with the peach themed touches. It’s just fun to read about it and it really made me want to eat some peaches. The small town setting and southern feel really came alive in this book. And with the focus on the debutante ball the southern atmosphere was even more present than in the previous ones. And I liked the debutante tips at the start of each chapter.

To summarize: this was a fun and enjoyable book. The set-up of the story and the mystery is a tad too similar to the first book, but also different enough that I still enjoyed it. The mystery wasn’t too surprising, but also not too predictable, so that worked out well. It was fun to return to this town and characters and see how things develop in this book. There are some new side characters and interesting plot lines and developments involving some side characters. There is a hint of romance, but it stays a side plot. The peach touches and southern small town atmosphere are the highlights of this book and add a fun touch to the series.

Have you ever read a fruit themed book or a book with lots of food references?

14 responses to “Review: Rest in Peach by Susan Furlong”