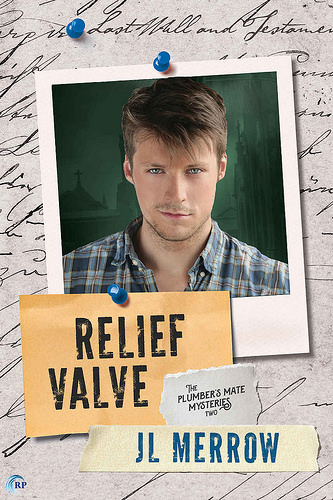 Blurb:
If you dig up the past, be prepared for some dirt to stick.

The relationship between Tom Paretski, a cheeky plumber with a gift for finding hidden things, and PI Phil Morrison may only be a few weeks old, but already it’s under attack. Tom’s friends and family are convinced the former bully isn’t good enough for him, and they’re not shy about saying so.

Then Tom’s prickly older sister, Cherry, is poisoned at her own engagement party. Tom’s left reeling and not knowing who to suspect. Could it be her new fiancé, Gregory, a cathedral canon with an unfortunate manner and a taste for taxidermy? Or someone from her old writers’ circle, which she left after a row? Or could the attack be connected to her work as a barrister? Meanwhile, Tom’s honorary auntie’s left him a gag gift from beyond the grave that could be more significant than anyone knows.

Phil’s fighting against the clock to solve the case before somebody ends up dead. And with the poisoner hiding a dark secret, Phil’s terrified Tom could have been the target all along.

I really enjoyed the first book in this series, so after I finished that one, I started with book 2. In this book there’s a new mystery for Tom and Phil to solve. And some side plot lines too. Tom’s aunt left him something, but he first has to find the second part of her will to find it. Then there’s the romance between Tom and Phil, that’s still in the new stage and is progressing with some hurdles along the way.

Again I enjoyed the combination of genres in this book. It was a good read, but I felt this one was a bit slow at times. Sometimes the focus seemed to be more on Tom’s daily life than the actual mystery. Tom’s life was fun to read about to, but I would’ve liked a bit more attention on the mystery. Or maybe I enjoyed this one less than book 1 because the mystery didn’t fully grab my attention.

The mystery somehow failed to fully grab me and I am not even sure why. At first the book seems a bit divided between the storyline surrounding Tom’s aunt, him reconnecting with his sister and then the mystery surrounding the poisoning. I wasn’t sure if the events were related or just put in the same book. And the aunt storyline dragged a bit through the book and when we get the reveal it felt a bit anticlimactic somehow.

I usually like poison mysteries, but for some reason this one developed a bit slowly and wasn’t as engaging as I had hoped. There were multiple suspects, but just like in book 1 we didn’t have enough information to really narrow it down yet. I wasn’t surprised when the murderer got revealed, I hadn’t guessed it until shortly before that, but it did make sense. I was surprised by the motive as I wasn’t sure what the motive would be. I did make sense, but at the same time it also wasn’t like you could spot all the clues when looking back. I don’t know, it just didn’t fully worked for me somehow.

I liked how careful Tom was after his sister got poisoned and even though he was a bit overprotective I think that was smart in this case when they didn’t catch the one who poisoned her. They were pretty smart about how they researched the mystery too. Which is also why I thought the event at the end was a bit unbelievable.

The romance is a bit different than how it was in book 1, as Tom and Phil are now a couple. They are growing closer, but at times it also felt like they were stuck in that slightly awkward phase between a casual hook-up and really caring about each other. I liked the small hints throughout this book that they had grown to care a lot about the other. Although I would’ve liked a bit more of the close moments. There are some great sweet scenes between them, but most of the scenes with them are either very casual, investigating or they’re having sex. But overall I do like them as a couple and I am looking forward to see how their relationship progress throughout the book. I liked how there was not much drama, but still a few bumps along the way as they figured things out.

I like the addition of the paranormal aspect in this series, but sadly in this book there was very little surrounding Tom’s ability. Only one random incident at the start of the book and then twice at the end of the book where he used it. I would’ve liked a bit more of the paranormal aspect as that’s one of the things I really liked in book 1. Although on the other hand he does seem to have gotten a bit more careful while snooping and using his ability, which is nice too.

To summarize: this was a fun read. There’s a new mystery, more of the romance and some other side plots lines as well. The story felt a bit slow at times and the mystery didn’t fully grab me, but overall I still had a fun time reading this one. There were some interesting twists during the mystery, although I wasn’t really surprised by who the murderer was, I was surprised by the motive. The romance has a different pace in this book now that Tom and Phil are a couple and they are slowly growing closer. There wasn’t much done with Tom’s ability in this book, which I thought was a bit of a shame, although there are some scenes were he uses his ability. All in all a good second book, although I enjoyed book 1 more.

What’s the last mystery you read?