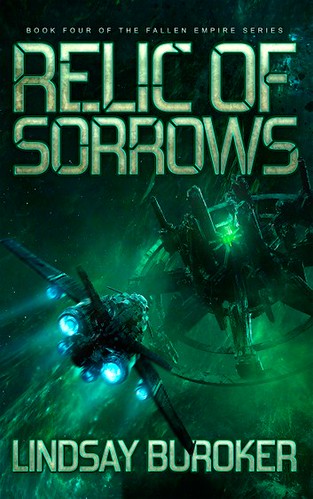 Blurb:
Captain Alisa Marchenko finally has a lead on finding her daughter, but her passengers want her to take them on their quest instead. Even though the Star Nomad is her ship, they have power she cannot fight, and she finds herself with no choice but to accept another detour.

But the ancient relic they seek has the ability to destroy worlds and is coveted by many. The path leading to it is riddled with competitors and littered with the dead, and even a cyborg and a Starseer may not be strong enough to fight the obstacles in the way.

Swept up in a fate she never chose, Alisa must find a way to survive against impossible odds, knowing that if her passengers succeed, they will change the course of history—maybe not for the better.

I’ve been really enjoying the Fallen Empire series by Lindsay Buroker and this fourth book in the series is no exception. Filled with action, great characters, an interesting universe and some great twist and turns I would recommend this series to those who love sci-fi books.

In Relic of Sorrows the search is on for the relic. They finally have a clue where it is and three of her passengers want to visit so Alisa ends up bringing them there. They also have a new passenger onboard, Abelardus. Who complicates things, but who might also be a valuable source of information as he knows the person who kidnapped her daughter. It’s another great read that kept my attention. The pace is well done and there’s plenty of action, while also enough room for a bit of character depth.

This book felt a bit like a search for hidden treasure and I quite liked that vibe. Even though I was unsure about this whole relic and whether they should have it in the first place, it was a lot of fun to follow them along their quest to find it. And it’s complete with complications, booby traps and other people who are after the relic as well as some interesting twists.

I also keep being impressed with how even with the amount of action and things going badly for the characters, things happen slightly different every time, so it never feels repetitive. It also keeps having this positive vibe that I love, you know the characters will eventually come out alright form whatever trouble they’re in.

There are also some interesting twists and reveals in this book. I feel like in every book it becomes clearer what happened to Jelena and while in this one they don’t make any physical steps to being closer to finding her, there are some pieces of information that come to light that bring the events in a slightly different light and offer another possible motive for the kidnapper or offer more depth to the current motive.

I enjoy reading about these characters. They all have their own personality. I like Alisa’s brand of humor and seeing how Leonidas reacts to it. There also is some development in the romance and a reveal surrounding Leonidas’ quest which sheds more light on his character and goals. Alisa and Leonidas continue to be the most interesting and likable of the group.

Yumi is a bit more to background in this one with few important scenes. Mica sticks to her side character role the same as in previous books with her being important, but not very present most of the time. Abelardus is a bit hard to get a grip on at first and the more we learn about him the more I dislike him, he does something in this book that crossed a line and I thought he got off easily. I do find his character interesting and how he adds the Starseer perspective to the group. Alejandro has a bigger role in this book as the relic is his quest. He still dislikes Alisa a lot, so I find it hard to believe at times why he either doesn’t grow to like her more or find another ship. There is some interesting dynamics between him and Abelardus as they both are after the same relic.

This book also addresses the different motives and goals of the characters again and at times I struggle to understand why they all stick together. Although I am glad that they do as it makes for interesting adventures. I also liked to see Leonidas expressing curiosity about why Alisa joined the Alliance and I feel that both she and Leonidas are getting a bit softer in their views. This book continues the show the more grey side of the alliance as well.

There are some new things we learn about the world as well. Mostly pieces that flesh things out a bit more. A bit about the relic and Alycone. I also realized the galaxy is a bit smaller than I initially thought and now I kinda want a map to be able to visualize things better and get a feel for the planets and such in this part of the galaxy.

To summarize: This was another fun read. This book having a bit of a search for the hidden treasure vibe, which was quite fun. There is again plenty of action as well. I liked the few twists and reveals this book brought and how we learn more about Alisa and Leonidas. Their romance progresses a bit too, which I was happy to see. The group of character is interesting and they all seem to want different things. At times it’s a bit hard to believe they all stick together, but I am glad they do as it makes for some great adventures. And with everything that happens in this book I am curious to see what the next book will bring.

6 responses to “Review: Relic of Sorrows by Lindsay Buroker”