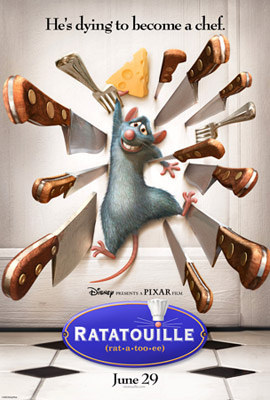 Description:
A rat who can cook makes an unusual alliance with a young kitchen worker at a famous restaurant.
– summary copied from IMDB

My Review:
Last month my boyfriend and I watched the movie Ratatouille. The movie is about food and rats, which made it sound like a movie I would enjoy. And I did, but I didn’t expect I would enjoy it this much. Ratatouille tells the story os a rat named Remy who is different from the other rats, he doesn’t want to steal and eat garbage, he wants to cook. He has been seeing shows on the tv of a famous chef and he dreams of becoming a cook himself. The cook in this movie has written a book Anyone can Cook and it would work well as a slogan for this movie as that’s exactly where the movie is about as well.

I had a lot of fun watching the movie. There wasn’t a dull moment and it kept my attention the whole time. There are some action or chase like scenes that got me scared for the little rat. Remy was a great main character, with how he wanted to be different, but he also realizes he is still part of his family too. There isn’t a lot of drama or overly emotional scenes like in some movies, but it still managed to convey emotions and it felt real. As real as a movie about cooking rats can be, but strangely enough the whole movie had a realistic vibe and it’s obvious the directors did their research about rats, cooking and Paris.

While watching the movie it really caught my attention how realistic the rats moved. We had four pet rats in the past and we know how they move and the movie captured that feel of real rats perfectly. The way their bodies were shaped and the moved was very realistic and it really added something to the movie. The animation was brilliantly done, it’s a joy to watch and the movie looks really good as well. I also loved how the movie paints rats in a positive light. Having had pet rats myself I love rats and I wish I could convince the whole world what awesome creatures they are. So it was amazing to see a movie that put the rats into a positive light and having them feel very realistic as well.

The setting in Paris really came alive as well. There are some beautiful shots of the city and it really felt like we were there with Remy and the others visiting Paris. I’ve visited Paris once and too be honest it’s not my favorite city to read or watch about. My impression of the city was busy and touristy. But this movie does show the beautiful side of Paris while still making it feel realistic and recognizable for someone who has visited. Then there is the cooking aspect. I thought it was interesting to get a view into a restaurants kitchen in this movie and that part felt realistic too. A Bit chaotic, lots of hard work and food. Being a foodie and animal lover I really enjoyed those aspects of this movie. The movie perfectly captured both those themes and turned this into a movie I will be sure to rewatch later.

There are twist and turns and ups and downs. It definitely was unpredictable in some places and I liked how the flow of the movie had multiple ups and downs and problems for the characters to solve. It was a movie with a great storyline without getting overly sappy or dramatic or dragging things out. It really was great. Besides Remy there are some fun side characters as well. There are the other rats, like Remy his brother and father. And the clumsy human main character Linguini, who starts working as a garbage boy and befriends Remy. There are also other characters who work in the restaurants kitchen, a restaurant critic, the owner owner of the restaurant and more. It’s a fun cast and they bring the movie alive. I also appreciated how the characters didn’t feel too clichéd, which sometimes happens in movies. They alt felt pretty real and it was fun to follow their story.

To summarize: Ratatouille is one of the best movies I’ve seen in a while. It combines rats and cooking, two things I love. The story was great with multiple ups and down and problems the characters had to overcome, there are some great twists and turns as well and the action scenes kept me on the edge of the seta concerned for the little rat. The movie also looked really well graphically. It’s a joy to watch the movie with the pretty shots of Paris, the realistic way the rats move and getting a glimpse into a restaurants kitchen. If you haven’t seen this movie yet I would definitely recommend it!