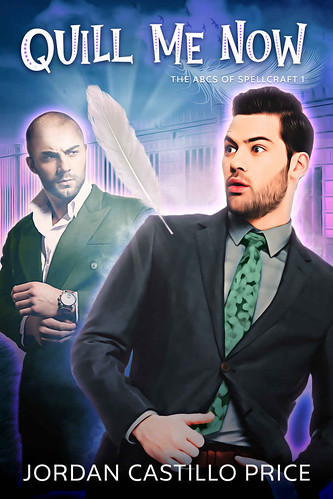 Blurb:
What if the words you wrote came true?

Spellcraft isn’t exactly a respectable business, but it does pay the bills. At least, it should. Unfortunately, Dixon Penn failed his Spellcraft initiation. Instead of working in his family’s shop, he’s stuck delivering takeout orders in his uncle’s beat-up Buick.

Winning a Valentine’s Day contest at the largest greeting card company in the tri-state area would be just the thing to get his life back on track—but something at Precious Greetings just doesn’t add up. And despite numerous warnings to quit pestering them about his contest entry, he just can’t stop himself from coming back again and again.

It doesn’t hurt that the head of security is such a hottie. If Dixon had any common sense, he’d be scared of the big, mysterious, tattooed Russian.

To be fair, no one ever accused him of being too smart….

I grabbed this one from a free Bookfunnel or Prolific Works promotion as it sounded fun. And then when I was looking for something fun to read I picked this one up. It was a pretty fun and quick read. It was a bit ridiculous/ funny at times, the world building didn’t make sense to me and the way things got build was quite confusion. But it had an interesting set-up and even with the things that bothered me I still had fun reading it.

Quill Me Now is told mostly from the point of view of Dixon. He is part of the Penn family in whose blood runs the power of being Scrivener’s. Scriveners can write and their words have powers. Oh but they also need a Seer to paint, else it doesn’t work. Dixon failed his initiation, which never happens, so now he delivers people their meals instead. Until one day he decides to take a chance at a greeting card content and gets entangles into something bigger.

This was quite the fun read, but at the same time it was just a bit weird. There were also some ridiculous parts. Behavior that didn’t make sense and seemed over the top at first. But it sort of makes sense later. There were a few things that didn’t fully get explained or made sense, but mostly I was able to enjoy the story even with that. The plot was interesting enough and I liked how things got resolved.

The romance literally goes from basically zero with some mutual attraction to hot. So fast that it was almost funny, but I think that was the point? It was kinda funny I guess and it made sense, but it was hard to really take things seriously or really feel the romance with the way it develop. But strangely enough it also kinda worked for the way this story set-up and developed.

The world building was just confusing. We get pieces spread throughout the book, but in such a way that I totally got the wrong impression of the world multiple times. Like these really big things for understanding how the world works get mentioned pretty late in the story. Until 70% of the story I thought the Handless (those without magic) weren’t aware magic existed and only toward the end we learn there actually is a legal department that covers the use of magic. I had to rework my whole image of the world multiple times and it was just confusing as I couldn’t get a good grasp on the world.

I did like the idea of the whole words have power thing, but at the same time the world that was build around it seemed way too normal. Why wasn’t this power feared more? And in which ways did this world develop differently with this magic? Also why did no one ever wonder why Dixon failed the test as it is established multiple times this should’ve been impossible? Why did no one look into this? And what is the role of free will when words can influence your behavior?

To summarize: This was a fun and quick read set in a world where words have power. Dixon comes from a scrivener family, but lacks the power himself. In this story he stumbles upon a greeting card contest and get entangled into a bigger conspiracy. The plot was interesting enough and I liked how things got resolved. There were some things that didn’t quite make sense, but overall I still had fun reading this one. The romance develops quite quickly and suddenly in a way that was almost funny. I think it was meant to be funny. It kinda worked here. The world building was quite confusing, I had trouble getting a good grasp on the world and had to make some bit revisions to my idea of the world multiple times when suddenly much later we learn a big important piece. Like how normal people know of magic wasn’t revealed until 70% in the story. All in all I still mostly enjoyed reading this even tough I had a lot of questions.

Links:
– Goodreads
– Bookbub
– Amazon
– B&N
– Kobo
This book is free on all vendor sites at the moment in case you want to pick up a copy.

4 responses to “Review: Quill Me Now by Jordan Castillo Price”