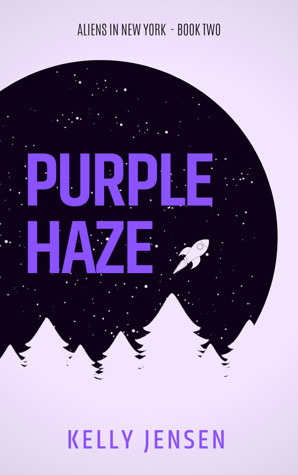 Blurb:
Six months have passed since Dillon and Lang crashed into each other on a crowded street in New York City, changing the course of their lives. Now they’re living together as a couple, happy, in love, but not quite ready to say the words out loud.

Dillon is about to embark on a new adventure—opening a private art school housed in the brownstone left to him by his father. Lang… Lang is becoming ever more aware of the futility of his mission: being caretaker to his clan’s future when his clan might not survive the war with an opposing faction.

When a flashbulb outside a nightclub on New Year’s Eve temporarily blinds Dillon, the course of their lives is set to change again. Dillon’s perception of how the world works is going to be forever altered, and Lang will have to decide between his mission and the man who has come to mean more to him than he ever thought possible.

It will be up to both of them to chart a new direction, one that holds the balance between being human and alien. A course that might require sacrifices neither of them is willing to make.

Purple Haze is the second book in the Aliens in New York series and as far as I know it wraps up the story of Lang and Dillon. I really liked this sequel and to get to spend more time in this world and with these characters.

At the end of book 1 Dillon changed and he has to deal with some of those changes now, when he starts developing a weird new ability he doesn’t think much of it at first, but there’s more to it than he knows. Lang knows Dillon is struggling a bit, but doesn’t quite understand why until everything comes to light and they find out the implications of this. They’re also finding their way together and building a life together in New York.

It was a fun read, I liked how most of the first half just shows their daily life with the firsts hints of trouble sprinkled in. This author really does the daily life bits well and it still makes for a great story. The second half is more focused on the trouble they find themselves in and it’s great seeing how they deal with that. There is more alien stuff and I like how we get a better feel for the aliens and some other aliens here on Earth.

One of my favorite parts of this book is probably Dillon and Lang’s relationship, it’s great to see these tow together and how they stick together even when trouble hits. And you really feel the depth of their feelings and how they would go for the other. Both characters have some great scene sand toward the end both do something big that really shows the depth of their feelings. I also love how it’s clear they both found their home and selves. A place where they belong and be themselves. It was wonderful to see. I also liked how human Lang still is and how his time on Earth changed him.

There are some interesting side characters too, but really the focus is on our two main characters mostly. There are some interesting twists regarding some of the characters. I was quite fond of Dillon’s mother and grandmother, make sure you don’t miss the short story What About Lunch in which they both pay a big role too. I really like Upero, Lang’s personal AI and how much of a personality he has. I was a bit surprised at first to see Josh and Micah have such a big role in this book as I didn’t even remember them from their short appearance in book 1. It also felt slightly off, but I think that’s because they are two characters from the original authors series in whose world this series is set as well. They did seem like fun characters and it made me curious about their stories.

I also liked how this book expands on what we know about the aliens and shows a bit more alien technology as well. I also felt like we learn a bit more about the aliens themselves. There were a few surprising twists there. I also like how it addresses how alien most aliens are and how they’re adapting to human life and how human Lang had become.

To summarize: this is a lovely read about two aliens in New York who love each other. I liked how the first half of the story shows a bit more about their daily life, with the first hints of change as well. Then the second half focuses more on a problem they find themselves dealing with. I really like Lang and Dillon together and it’s clear how much these two care about each other. They show that in multiple ways. There are also some fun side character, like Dillon’s mother and grandmother and Upero the AI. It also was fun to learn a bit more about the aliens and their technology. All in all it was a great sequel and I like how this book wraps up Dillon and Lang’s story.

Do you like alien aliens or do you prefer them to be more human?