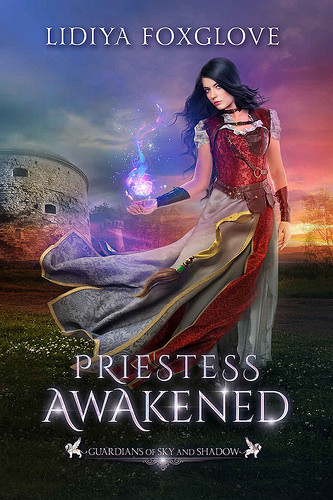 Priestess Awakened (Guardians of Sky and Shadow #1)
by Lidiya Foxglove

Blurb:
My world isn’t safe. The northern gate lies open and monsters roam the land. Towns are locked behind walls, protected by the emperor and his Black Army. Once, a fated priestess and her four guardians kept the gate sealed with magic, but there hasn’t been a priestess in over a century…or so I thought.

When a monster attacks me within the walls of my village, I am saved by Sir Forrest—the quiet former soldier who came to Istim three years ago.

Turns out, he’s been watching me. Waiting for my powers to awaken.

I am the fated priestess.

But there have been others. The genius commander Abel and the Black Army have killed them all. Sir Forrest found out the truth, and now he is driven by his sacred mission to help me find my guardians and bring me to the gate.

All I have to do? Find them and join with them in the Grand Quintet to grant them the powers I apparently hold, close the gate, and save the world…without suffering the same dire fate as the priestesses who came before me.

I’ve always liked attention…but this is too much.

This reverse harem fantasy romance trilogy is for those who enjoy plenty of steam, strong heroines, a few hot guys (and one who is just pretty and probably sparkles), more tragic pasts and secrets than any group of people should reasonably have, and winged cats.

My Review:
The moment I heard of this book I knew I had to read it, something about that pretty cover and the sound of the blurb made me curious about this one. And I haven’t seen a lot of Fantasy Reverse Harem books so far. I am glad I picked it up as I really enjoyed this book. I have to admit when I first started reading I wasn’t sure how much I would enjoy it, but things picked up quickly and soon I found myself really enjoying this one and wanting to read more. And it felt like it only got better once the story progressed.

Priestess awakened is about Phoebe, who discovers she is the Priestess of the Gate and there this retired soldier that was staying in her village is actually one of her guardians and she needs to find the other 3 guardians and close the gate. By having sex with her guardians she can give them power and each guardian has a different sigil. Yes her role in this whole thing is actually to provide her guardians with extra powers and heal them that way.

I have to admit the concept did sounded a bit ridiculous with how the sex served as a means to give them power and heal them, but it was actually really well written, developed and tastefully done. It had a solid story with focus on the characters and their relationships and emotions. And I liked how things were handled and there are some interesting twists at the end that make me really curious about the next book. It was just a very fun read and I wanted to see how everything played out.

I liked Phoebe as a main character, she felt pretty realistic to me. She had seen a bit of the world when she was picked as Strawberry Girl when she was younger and traveled around a bit, so she has seen more of the world than most of the villagers in her village, but at the same time also doesn’t really know what’s going on out there. I liked how she was sad to lose her dreams for the future, but she also handled the responsibility well. I liked how she had her doubts and was a bit afraid or nervous at times, it made her feel real. And I am looking forward to see how she developed over the course of the series.

This book was a bit different than the Reverse Harem books I read so far, but I liked how this book handled the Reverse Harem aspect. It was a bit of the chosen one type of plot, but it worked here and I liked that while they did mostly go along with this plan, they also struggled accepting their role a bit. I thought that felt realistic that they had their doubts and struggles as well. I liked how each of the guardians were very different and there’s also a non guardian that travels with them. The author did a good job to give each of the guardians a different feel.

I also liked how it dealt with the emotions and interactions between the different guardians. And the struggle between what they wanted and what they had to do. There is a bit of jealously, some doubt and guilt and a bunch of other emotions that get addresses. It was pretty interesting to read about and I liked how this way the harem aspect got worked out.

I would’ve liked to learn a bit more about the guardians, they all were pretty interesting characters. But as the book isn’t too long and there are multiple of them it still felt like we only get a bit of each of them and even less of the ones she meets later. But even with that I think the author did a good job developing their personalities and giving the reader a feel for each of them. And I am hoping to learn more about them in later books.

The world building felt a bit limited. We get to know a bit about the priestess, her role and her guardians and they actually have a book that details a few of those things, but it also felt like there’s a lot we don’t know. Which get illustrated at the end when someone else has different information/ point of view. I also wanted to know more about the monsters, they seemed a bit stereotypical evil creatures so the main characters have something to fight against. But later on we get a few hints there might be more to the monsters and I can’t wait to see how things develop in the later books.

I also had some trouble getting a good grip on the world at times, what was possible and where they were on aspect like technological advancement, what kind of magic there was etc. I also would’ve liked a map as sometimes I had trouble visualizing were everything was in relation to the rest. there also were a few mentions of other countries and realms and I wasn’t quite sure how that related to this place. I did like the set-up with the emperor who wanted more power and is conquering other places and how the cities were all walled against the monsters and the safe houses and such. Oh and there is a flying cat, which was pretty cool.

To summarize: I really enjoyed this book. It’s a fun fantasy Reverse harem book. Phoebe is the Priestess of the Gate and only she with her four guardians can close the gate so the monsters can’t get through. She needs to have sex with her guardians to give them more power, and while that sounded like a bit of ridiculous set-up at first it was actually quite tastefully done and developed. I liked how different all her guardians were in their personality and even in bed as well. It also deal with a bunch of emotions and struggles with how they have this responsibility, but they all have hopes and dreams they might have to give up as well. And I liked how that got touched upon in this book. While there are a bunch of steamy scenes, there is also enough space for the story and to get to know the characters. Although I am looking forward to get to know more about them in later books. The world building is pretty minimal and it could be hard to get a full feel for the world at times. The monsters seemed a bit stereotypical evil, but something at the end makes me think we will learn more about that in the next books. I would definitely recommend this if you’re looking for a steamy Fantasy Reverse Harem book.

Do you read Fantasy Romances?