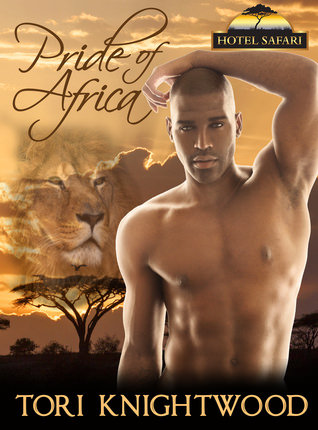 Blurb:
She planned on studying lions…

Serena Fitzgerald is a southern belle and a student of animal behavior. She came to Kenya to study under a world-renowned biologist who also owns a safari lodge. Serena expects to work hard. She expects to learn a lot. But she didn’t expect to fall for her mentor’s son.

Colin Kemboi is a bored and rich playboy. Half British and half Kenyan, he fits everywhere and nowhere. But as a lion shifter, he yearns for the Kenyan bush. And he yearns for a woman who can love all of him, not just the jet-setting lifestyle he can provide.

Will Serena accept Colin’s lion half? Is Colin willing to settle down with a woman who isn’t among London’s elite?

My Review:
I heard of this book in an instafreebie promo page that I visited, I went to look it up and realized it was free and got it. I mean lion shifters in Kenya, how cool is that? And as I expected I liked the premise, it was fun to read about lion shifters in this country and there were these nice touches about how he wouldn’t shift where normally lions didn’t run. It also felt like the author knew what she was talking about when it came to this country.

It was a fun read, with shifters and a bit of heat and romance. It a fun, but short read. Sadly I found the book a bit rushed. It was like the book was put in fast forward, conflict got brought up in a conversation and resolved in the same conversation. One date was enough for them to fall in love and the whole conflict of why they couldn’t be together got resolved in the next chapter after it got brought up. There is a twist at the end that lacked the impact it could have. The whole lion shifter thing got hardly explored. It just felt a bit too fast. There wasn’t time to really get to know the characters, feel the romance and get to experience the scenery.

And even though the story felt rushed, I still enjoyed it. While the pace is fast there are still attempts to put some personality in the characters, with how Serena is shy and interested in animals and Colin feels like he doesn’t quite fit into the high society and likes how down to earth serena is. And while I would’ve liked to get to know the characters better, I liked that they both had their own personality. There were also some interesting side characters and I wondered if some of these would get their own story.

So the characters did have some personality and I did think they made for a good couple, I just wanted things to slow down a bit, so I would have more time to spend with them, see them getting to know each other and see more of the setting as now it didn’t come alive as much as I hoped. I did have a pretty vivid visual of how the lodge looked, but that’s mostly because of what my mind conjured up and a few details we got.

I thought the setting was original as I don’t think I’ve read a book set in Kenya before. I also liked how it featured a lion shifter in a country these animals naturally occurred. The book was well written and enjoyable even though it was fast paced. And I do plan to pick up the rest of the series.

To summarize: This book is great for when you want a short, but fun romance set in Kenya. I had fun reading this book, the setting in Kenya was unique and it felt like the author knew what she talking about. The characters had enough personality to get a bit of a feel for them and their romance was sweet and had a bit of heat. Sadly I felt like the whole story was told on the fast forward stand. The whole book felt a bit rushed, like everything went by a bit too fast and I would’ve liked more time to really experience everything, get to know the characters and see some topics be more explored. It is well written and made for a enjoyable read and I do plan to check out more of this author’s work.

Have you read a book set in Africa?

12 responses to “Review: Pride of Africa by Tori Knightwood”