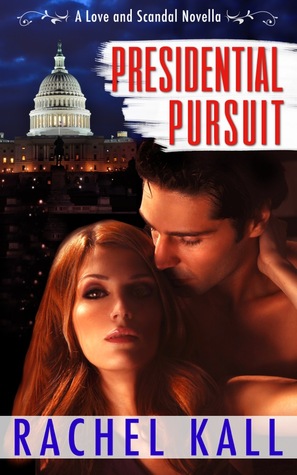 Blurb:
Dynamic and determined, Helen Riley has devoted her life to public service. Now she’s on the verge of doing something no other woman has ever done: Become the President of the United States of America. But her enemies will stop at nothing to end her Presidential hopes.

Smart, loyal, and sexy Sean Mackay has never pushed to be more than Governor Riley’s best friend and strongest supporter. However, when her life is threatened Sean steps up to protect the woman he loves beyond all reason.

As the campaign heats up, sparks begin to fly between Helen and Sean. Will she make history and admit her love for Sean, or will her pursuit of the White House end in tragedy?

My Review:
I once grabbed this as a freebie from amazon, I was in the mood for a short and fun story, so i decided to give this a try. And I am glad I did, Presidential Pursuit is a prequel to Rachel kall her Love and Scandal series. The story follows Helen, we is trying to become the first female president. Her best friend Sean helps her with the campaign and they are both secretly in love with each other and don’t want to admit it. The story mostly focusses on the part of the campaign where two candidates from the same party fight to see who is to be the presidential candidate.

This book is a nice mixture of political issues, romance and a bit suspense thrown in. There isn’t enough political stuff to get bored and it was interesting to see Helen deal with the problems that came her way. Then there is some suspense, but this was fairly mild, the focus is more on the politics and romance. Towards the end we get a hint of what it is all about and it was a great set-up. I think this sets-up the suspense elements for the next book and it was nice how they incorporated that in the prequel. Also while it is a prequel and pretty short is was a nice read, the pace was done well, although there were a few scenes that felt a bit rushed. There are also some time skips and eventually an epilogue which wraps this book up.

The romance was fun as well. Helen and Sean have been friends for a long time, they love the other, but don’t dare say anything. Both have their reasons, but their close proximity during the presidential race is making it harder for both of them. At first it’s a bit frustrating, as the reader you know how much they are in love with the other and get both their point of views,but they aren’t acting on their feeling. There are a few times when I just wanted to smash them together and make them kiss and confess their feelings. And then when that finally happened it felt a bit too easy, just like they suddenly realized their reasons didn’t matter. I did like how it was obvious these two knew each other well. There is one sex scene. The epilogue is really sweet and I did like the romance.

To conclude: This is a nice short introduction to Rachel Kall her Love and Scandal series. I think it would be best to read this before book 1 as the suspense element is set up in this book and I think it makes most sense to read this first. Some scenes feel a bit rushed and it felt like this could’ve been a bit longer. There are some politics that come up, but in an interesting way and I actually like the political spin. The romance was well done, it’s a sweet friends to lover romance. They both are afraid to admit their feelings to another, but it was great to see them finally take the risk. The romance was done well and the character are good for each other. The epilogue was really sweet and well done.

What do you think of political themes in a book? Do you enjoy politics in a book and how should they be handled for you to enjoy it?