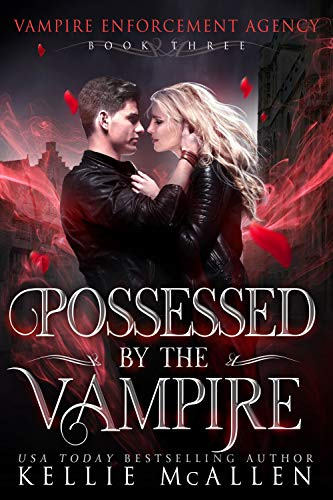 Possessed by the Vampire (Vampire Enforcement Agency #3)
by Kellie McAllen

Blurb:
Save the woman he loves, or save humanity. Which will he choose?

With the opening of the Vampire Training Academy, Roric is confident that the Agency is getting a handle on the rogue epidemic, and he can focus on other things, like getting Caroline to agree to mate with him. But when the rogues conspire to take down the school, Roric realizes the battle has just begun.

The rebellion wants to bring an end to the Academy, the Agency, and, ultimately, the treaty between vampires and humans. While Roric is reeling from the surprise attack, they make their demands, holding Caroline as ransom..

Can Roric save Caroline before the next attack, or will he have to sacrifice the woman he loves to protect the world from his own kind?

Possessed by the Vampire is the third and last book in the Vampire Enforcement Agency series. After what happened in the series so far I was excited to see what the last book would bring. Everything comes to a boiling point in this book and once the storm is over it resolves things with a satisfying conclusion. It was a pretty fast paced read with some danger going on and I wanted to know how they were going to get out of this situation.

The rogue vampires have been growing in numbers and in this book they finally make their move. There is death and destruction and Roric has to make the most difficult choice and find a way to keep everything he cares about. I liked how in this book we got to see more of the rogues and what they were going to do to get what they wanted. I didn’t really care for the extra bit of drama/ sadness at the end. One of the things that happened to Caroline didn’t fully make sense to me. Oh and we never find out if a minor side character made it or not.

The focus in this book is a bit more on the story, but there’s still plenty of romance as well. Caroline is in some danger, so there’s less Roric and Caroline together in that part, but it was well written and enough going on that it didn’t turn stale. And I liked how Caroline handled the whole situation in a smart way, but also ready to help herself. The action the agents took at the end felt a bit extreme, but at the same time it felt in character, but it did seem to go against some of their rules.

The romance trouble Caroline and Roric had in book 2 almost completely disappears in this book and looking back book 2 is the one that felt a bit too extreme in terms of it upsetting what they had and now they’re back to how they were in book 1, only with more stability. I liked seeing those two together and how they had gained a better understanding and acceptance of each other with what happened in book 2. They do make for a great couple again in this book. There is a bit of heat as well and some touching moments as well.

The side characters were fun to follow as well. While they do get a less nicely wrapped up ending than Caroline and Roric do, it’s still clear where things are heading. I just wished they both could’ve gotten their epilogue as well, as I would’ve liked to read it. But while it’s told from multiple points of views, it’s still mostly Caroline and Roric’s story. Ivy and Taven hit some obstacles in this book, but I like how Taven eventually trusted Ivy with an important piece of backstory. There are also some fun Taven and Roric scenes that show how these two brothers care about each other.

I also liked seeing the direction Piper took in this one. She’s still the same person, but she has also changed a bit and is strongly leaning into making a choice romantic wise that I was happy with. I also liked what she did to help Caroline. I would’ve liked one scene with her and Caroline later in the book tough as they never even talk to each other in this book.

To summarize: all in all this was a strong ending to this series. The rogues finally show their hand and cause some troubles that the main characters have to resolve in this book. I did feel they struck them a bit too hard and ruthlessly, but it did feel in character. The romance troubles between Caroline and Roric are resolved, which made book 2 seem a bit too extreme in terms of Roric’s behavior, but I did like how they seem to have gained a better understanding and acceptance of each other because the struggles they went through. The side plot lines involving Piper and her romance and Ivy and Taven were great too. They don’t quite get the same epilogue as Caroline and Roric get, but it’s still clear where they will end up. I liked the direction Piper took and was happy with how Taven finally open up to Ivy. There were also some nice Roric and Taven scenes. It was a good ending to this series and I am curious what the author will write next.

6 responses to “Review: Possessed by the Vampire by Kellie McAllen”