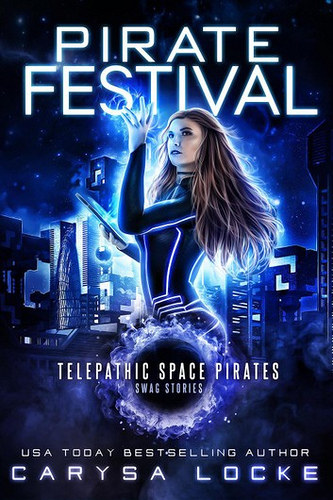 Blurb:
Nayla has a rare Talent: biokinesis, the ability to manipulate life at the cellular level. Healing people is her calling, and she’s never been happier than she is working with Doc, her mentor and the pirates’ chief physician.

But now a call for aid has come from the most unlikely source: the home planet of the Talented called Killers, those who take life with a thought. Nayla’s gift is the only chance to save a young man’s life, so reluctantly, Doc agrees that she must go.

To serve her patient, Nayla will travel to the most dangerous place in the pirate colonies. She will face assassins, and challenge her Talent in ways she never expected. But most dangerous of all, she will confront her own past.

Because once, she used her Talent to take life instead of save it.

Pirate Festival is Nayla’s story. We met Nayla in Pirate Bound as the sister of the main character of that novella and she also plays a role in book 1 and 2. I always liked her character, so I was happy we get to see more of Nayla in this book. Nayla has a rare talent called biokenis with which she can influence the biology of people, heal them etc. In this story her help is asked with a sick person on the Killer home world. No one is able to rouse him from his coma so Nayla goes to see if she can help.

I really like Nayla as a character, she is compassionate and wants to help others. She knows what her strengths and weaknesses are and this book really explored that further. I liked seeing her having to stand on her own when she’s on the killer home world with only one bodyguard/ friend, but not her usual circle of people and familiar surrounding of the ship Nemesis. It really forces her to rely on herself and it was great to see how she handled that. I liked seeing her development in this story, although the change at the end did feel a bit sudden, it did make sense and it was great to see her development. I also loved seeing how she interacts with Doc. And there’s a gift she receives in this book was great.

I really enjoyed this story and following Nayla’s adventure. I do have to mention that as another novella about this character is planned, there are some things left unresolved in this book. I would’ve liked to know that in advance, but this story does end in a good place. I just want more as I had so much fun reading this one.

There is a romance type of plot line, but it doesn’t get resolved in this book yet, but there will be another novella about Nayla so I am hoping we get to see her fall in love there. Nayla has a great friend Haggerty and while part of her hopes it might turn into more, she also knows not hope for it as Haggerty already is in a relationship. Then she meets another character who I think will be a her love interest (or maybe one of them). I am really curious to see how that develops in the next story.

This story takes mostly place on the Killer home world, this is a place not visited yet in the main series, so it was exciting to visit that here. I felt like we got a good feel for their planet and customs. How different they were and also the similarities. It was really interesting to read about and see how Nayla observes this all. There is a great development/ twist or maybe more accurately possibility for development that intrigues me and I am curious to see where that goes. I was pleasantly surprised by the direction the plot took as I wasn’t sure what would be behind it all and I liked the reveal. I am a bit sad we didn’t get to see the actual festival the story is titled about, although there is still some we learn about the festival as we see some of the preparation for it.

I also liked to learn a bit more about Nayla’s talent and how it works in this book. as we get to see her point of view I felt like I got a better understanding of her power. It also was fun to see some familiar character like Doc, Haggerty and Treon from the main series.

To summarize: this was a great addition to the world of the Telepathic Space Pirates. This novella takes place chronologically after book 2 in the Telepathic Space Pirates series and I would recommend to read it in that order as else you might be a bit lost. This story follows Nayla’s story, who is a side character in the main series. I really like Nayla as a character and it was great to follow her story. She develops quite a bit in this story and I liked seeing her take on this challenge on her own of visiting the killer home world. It also was interesting to learn more about the killers and the killer home world. There also is an interesting plot point and possible development that was interesting. The romance plot line is set-up here, but doesn’t bloom into a full romance yet, I hope that will happen in the next novella. I liked seeing her interact with the guys. There is a potential love interest who was quite interesting and Haggerty who mostly takes the friend/ bodyguard role. I also really liked seeing how Doc and Nayla interact, it’s awesome! He’s such a great parental figure for Nayla. All in all I had a lot of fun with this story and was sad when it ended as I wanted more, luckily there will be another novella that continues her story and I can’t wait to read it!

What’s a fictional holiday you read about?