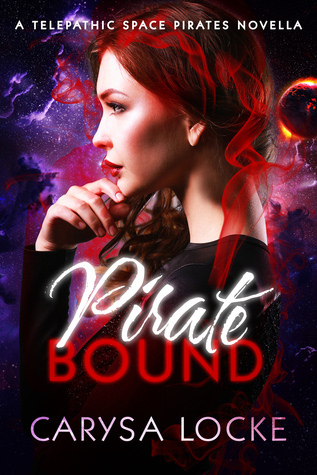 My Review:
Wow am I glad I picked up this book, this prequel was so good! I am already looking forward to read the first book! This book was one of my rare impulse buys. I saw the cover in a newsletter from another author and that red hair and her sidewards facing position somehow sold me on the book before I even read the blurb. Then I read the blurb and I gladly paid some of my won gift card money to get my hands on this book.

Pirate Bound is a science fiction romance book centered around telepathic space pirates and that combination is as much fun to read about as it sounds. I’ve been wanting to read more sci-fi romances and this book perfectly hit the mark for that. Compelling story, interesting characters and well thought out world building were all present. Then there was a great romance that nicely fit into the story without taking over the plot. I enjoyed both the sci-fi and the romance aspect and enjoyed every second of this fun book.

The story is told from Sanah and Dem their point of view. Sanah is on the run with her sister after finding out her brother has plans to use her sister her powers for his own gain and using her powers to hurt people instead of heal. Starving, tired and desperate they are on the run in a spaceship when they encounter a group of pirates. They are hesitant at first, but the pirates seem honest and they eventually take refuge on their ship. Dem is a pirate and one of the high ranking people on the pirate ship they encounter. He has some rare telepathic talents and doesn’t feel emotions, until he meets Sanah.

The set-up was interesting and I liked the way it got all worked out. the story flowed nicely and I felt the progression of elements felt very natural and realistic. Even while the story is shorter it in no way feels rushed and I was kinda glad a certain plot line didn’t got dragged out like might have happened with a longer book. Although at the same time I also would like to see more of Sanah and Dem.

The characters were are all interesting, we get a feel for the main characters and quite some of the side characters. Enough to form a picture for the characters and I appreciated how in a few short encounters the authors could still paint a vivid picture of them and their personality. Sanah was protective of her little sister and I admired what she did for her and liked seeing them interact with each other. And while she is protective she also gives her sister space. She is a scientist and likes getting answers and the scientist part gave an fun twist to her personality. She has the gift of empathy and I liked how well we got a feel for her gift and how naturally it was woven into the story.

Then there is Dem, the security chief on board this space ship. He doesn’t feel many emotions and when he meets Sanah and he feel an instant connection he isn’t quite sure what to do with it. I thought his behavior and actions made sense and he was an interesting character with his strong commitment to the ship and how focused he is to protect the two sisters.

The side characters are also fun to read about. From Phantom, who we see only shortly, to the Doc who plays a nice side role. Then there are Cannon, the pirate king, Treon, Dem’s brother and Sanah her sister who all play bigger roles into the story. And I wish we would get all of their stories as well, as they were interesting and I wanted to know more about them. They nicely fill up the story and I liked seeing them interact with Sanah and Dem and the other crew members.

I liked how the romance played out, no unnecessary drama and the conflict and obstacles that were in their path felt realistic and even got solved pretty quickly. I liked these two together and how they figured out how to handle these feelings growing between them. Yes the romance moves kinda quickly as this is a novella length book, but it didn’t feel rushed. And I did got a feel for them as a characters and how they got to know each other and I felt their connection.

The world building was one of my favorite elements. I have to admit I haven’t read a lot of books with telepathic abilities, so I wasn’t quite sure how the authors would work with that. I was really impressed with how they handled the telepathic part. It was intermingled in the plot and the world building, we saw how these telepathic gift got used for things like communication, but also for so many other things like healing, fighting and more. It was everywhere and I liked how much we got to see of the telepathic gifts. Not everyone has telepathic gifts, but most of the main characters do so we get a good feel for their gifts. The only thing I would’ve liked was to learn more about the world and galaxy as a whole. We get a bit of a feel for the struggle between the Commonwealth and the pirates, but the pirates didn’t really feel like pirates. They don’t do a lot of bad stuff or pirate stuff in this book, although there are some hints about it and they could be ruthless in some instances, but not without reason. Also this story mostly takes place on one ship, so while I got a good feel for the ship and some of it’s crew, the rest of the world and space stays a bit more vague. I hope we see more of that in the first book.

To summarize: I really enjoyed this book about telepathic space pirates. The story was compelling and developed naturally and kept my interest. The characters are interesting too and I liked getting to know them and hope we see more of them in later books. Sanah is a scientist and she cares a lot about her sister. She also has the gift of empathy which was interesting to read about. Then there is Dem who has some unique gifts and might seem emotionless, but Sanah breaks through his shields. There is also a great cast of side characters with their own personalities and I would love to know more about them. The romance developed quickly, but it didn’t feel rushed. I liked these two together and felt their connection. Then there is the world building, which was well done. I especially liked how the telepathic aspect was handled and how we learn a lot about the different gifts and how they are used. There isn’t a lot of pirate stuff though and the focus is mostly on this ship so we learn less about the rets of the world. All in all this was a great prequel and I can’t wait to read the first book!

What was your last impulse buy and was it a good one?