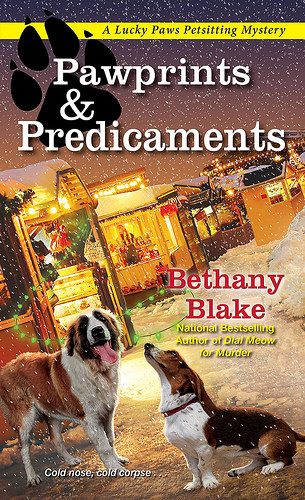 Blurb:
The Tail Waggin’ Winterfest is the highlight of the season in the famously pet-friendly Pocono Mountains town of Sylvan Creek. But despite attractions like an ice sculpture display, a dogsled race, and gourmet hot chocolate, Daphne Templeton finds herself annoyed by TV producer Lauren Savidge, who’s filming the festivities. She’s critical, controlling, and as chilly as the January air. Daphne would like to tell her to go jump in a lake–and as a matter of fact, that’s exactly what they’re both going to do . . .

It’s the first-ever polar bear plunge in Lake Wallapawakee, and Daphne and Lauren are among the eighty or so people who charge into the frigid water to raise funds for animals in need. Daphne makes it back to shore–with the help of a mysterious St. Bernard–but Lauren is dragged out stone cold dead. Now, with her trusty basset hound Socrates at her side, Daphne intends to assist Detective Jonathan Black in his investigation–whether he wants her to or not . . .

This series is so much fun and I excitedly started this third book in this series. It was a joy to return to this pet friendly town and follow Daphne as she solves yet another murder. There are secrets that come to light, new things we learn about characters and ofcourse lots of pets.

The mystery in this one was a good one. It kept me guessing. At first I wasn’t quite sure who to suspects, then I eventually decided on a suspect, but wasn’t 100% sure either and I my guess turned out to be wrong. I did guess the murder weapon correctly as one hint in that direction kept standing out to me and allowed me piece that together. I liked how a lot of secrets and stories get uncovered in this mystery and then by the end everything falls on it’s place. The mystery was also different here as Jonathan wasn’t on this case, but another detective instead, so that changed the dynamic a bit. It was a nice twist who the murderer was and it did make sense, but I would’ve liked a few more hints in that direction. And there was one red herring that was a tad too obvious to me.

At the end of book 2 Daphne rents some space to start her own pet bakery and I was excited to see how that plan panned out. In this book it isn’t up and running yet, but she is working to get the business there. I am curious to see how that will play a role in the next book. There’s also a friendly new dog we meet in this book and there’s a bit of mystery surrounding him and where the dog came from as well.

I also was excited when it turned out there was a rat pet in this book as well as I love rats. Although sadly I have the feeling either the author or the side character doesn’t know as much about rats as I would’ve liked as some of how the characters handled the rat didn’t make as much sense to me and cheese usually is only given as an occasional treat to a rat not as a staple food which it seemed to be here. Another slight issue I had was with how bad the main character was with skiing even while she had lessons and stopping while skiing/ slowing your speed is actually one of the easiest things about skiing.

This was just a really fun and well written cozy mystery. I like visiting this small town and spending time with the characters and pets that live here. I also think Daphne makes for a great main character although she does sometimes run off without anyone telling what’s she’s going to do.

There is only a hint of romance in this books and I still hope she’s going to end up with Jonathan as I really like the scenes between them and the type of banter they have going on. There are also some scenes involving Gabriel, but to be honest I never fully warmed up to him and I hope he doesn’t turn into a potential love interest.

I also like how the dogs and pets all have their own behavior and really come alive. I really like how Socrates’s his behavior is described and also how different Tinkleston and Artie are in comparison. And the St. Bernard that plays a role in this book is different again. The winter setting and focus on that with the Winterfest was a fun touch. And I feel that with each book we learn more about this town and it’s inhabitants.

To summarize: this was a great read! I loved returning to the small town of Sylvan Creek where the winter festival was taking place. the mystery was a good one that kept me guessing and lots of secrets and backstories got unraveled along the way. I predicted the murder weapon correctly, but not the murderer. It was a nice twist, although I wouldn’t have minded a few more hints in that direction. Daphne is a fun main character to read about and I am still holding out hope that her relationship with Jonathan will eventually turn into a romance, they have some great banter going on. I never really fully warmed up to Gabriel, but I liked the new pets we meet in this book. And it’s great how with each book we learn more about the town and the characters. There also were parts about Daphne’s new business and the winter festival which was a nice touch and I like the continuity in this series. Another great read in this awesome cozy mystery series and I am already looking forward to the next book!

What’s the last book you read with pet characters?