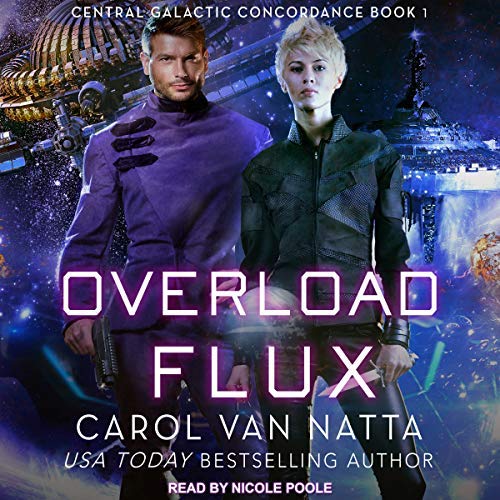 Blurb:
The Central Galactic Concordance has been stable for two centuries, but trouble is brewing. A pandemic is affecting hundreds of civilized planets, and someone is stealing the vaccine…

Brilliant investigator Luka Foxe’s hidden mental talent is out of control, making him barely able to function in the aftermath of violence, and the body count is rising. The convoluted trail leads to a corrupt pharma industry and the possibility of an illegal, planet-sized laboratory. In the face of increasing threats, he must rely on an enigmatic, lethal woman he just met, but she has deep secrets of her own.

Mairwen Morganthur hides extraordinary skills under the guise of a dull night-shift guard. The last thing she wants is to provide personal security for a hot-shot investigator, or to be plunged into a murky case involving sabotage, treachery, and the military covert operations division that would love to discover she’s still alive.

Two more lives in a rising death count won’t bother their enemies one bit. Their only hope for survival lies in revealing their dark secrets and learning to trust one another.

This review is for the audiobook edition of Overload Flux and at the same time is my re-read review for this book as I read the book version earlier this year before re-reading it in audiobook.

I don’t think I could’ve picked a better book for my first audiobook. Not only did I love Overload Flux when I first read it earlier this year, but the narrator did such a good job with the narration. I think I actually loved it even more than the first time I read it.

Overload Flux is the first book in this series and probably my favorite book in the series so far, so I was happy to be able to re-read it an experience the story in a whole different way with the audiobook version. As I already knew the big lines of the story I was able to slip easily into the story and focus in the narration and what it added to the book. I am happy I picked a re-read for my first audiobook as it made it easier to get used to the audiobook format.

I just love this book, the story of Mairwen and Luka is just awesome. It’s full of adventure, mystery and a great romance. I was again impressed by how well the author blended the different elements together, the romance is a strong part of the book, but the story is just a strong and they don’t overshadow each other. I enjoyed the story and I seeing Luka and Mariwen get to know each other and how Luka struggles with his talent. I love reading about these characters.

I love Luka and Mairwan together and I fell in love with their story all over again. There were scenes earlier on that help even more significance knowing what would happen next and I also enjoyed seeing side characters that I already knew who they were and being able to see some early hints to their personality. And I was all anew surprised by how well one of the characters kept their true motivations hidden. Even knowing how things turned out I wans’t able to see many hints the other characters could’ve picked up.

With the re-read I was also able to follow the story and mystery part a lot better. Or maybe that’s because of the audio format, who knows. I remember with the ebook version I lost track of some threads a bit and wasn’t able to connect them as good. While now with the re-read I easily kept everything in my head and noticed how things connected and found the resolution a lot stronger because of that. I also like being able to see the set-up and hints to the bigger storyline that runs throughout the story.

I do think the few chapters of one of the evil guys (if you can really call her that) didn’t add as much as we never really see her actions on what happens. The chapter from Eve and Gheer’s point of view were great tough and added information.

The narration was so well done. I obviously have nothing to compare it to as this is the first audiobook I listened too, but I listened to quite some samples of other audiobooks before deciding to listen to this one. I found the narration easy to follow, I rarely had to rewind because I missed anything. And I find the narrator’s voice pleasant to listen to. I am impressed by the way she gives each character a different voice and she does the accents really well too. I never could’ve imaged how a narration could add to a character, but it does. And I found that Nicole Poole manages to let the characters personality shine through in their voice. I liked Mairwen’s voice immediately as it suited her. I had it get used to Luka’s voice for a bit, but quickly found it really fit him.

Once strange thing I noticed was how the Icelandic words are a lot harder to interpret now that I heard them and not saw them. The spelling made it easy to determine what he said most of the times, but in the audio version his accent sounds way more foreign and I needed the context to figure out what he said, which the author always provides so that was no issue. I liked hearing how the Icelandic words sounded, so that was a definite benefit of the audio version. Another strange thing I noticed is that I have no clue what anyone’s names look like, which sounds weird, but hearing and seeing them is different enough that if not for having read the book first I would have no clue how to write any of their names at all.

When reading a book I don’t really image the character’s voices as well if at all, I found that the audiobook really adds a different dimension to the story by being able to hear the voices of the characters. And how they emotions and thoughts shine through in the way they say things. Like when Luka spoke to Miarwen in endearments, you could hear his feelings shine through in his voice, which was great.

To summarize: I loved re-reading this book and listening to the audiobook edition. I think I enjoyed it even more than my first read and this already is one of my favorite books of this year. The audio really added an extra dimension to the story and as I had already read the book once I was able to see more of the foreshadowing and importance of some of the events, which was fun. I fell in love all over again with this story and plan to listen to the rest of the series next. The narrator did an awesome job with the narration. I liked how she did the voices for the characters and how being able to hear their voices added something to the story. I also thought she did the accents really well. All in all I count my first audiobook a big success. I not only got to experience one of my favorite reads of the year another time, but also am convinced that I enjoy audiobooks and plan to listen to more of them.

What was the first audiobook you read?