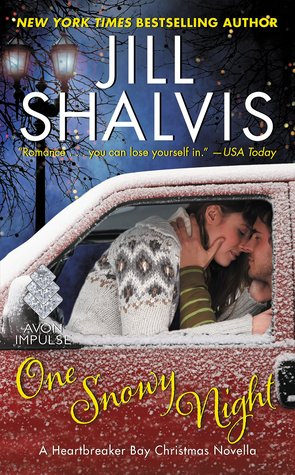 It’s Christmas Eve and Rory Andrews is desperate to get home to the family she hasn’t seen in years. Problem is, her only ride to Lake Tahoe comes in the form of the annoyingly handsome Max Stranton, and his big, goofy, lovable dog Carl.

Hours stuck in a truck with the dead sexy Max sounds like a fate worse than death (not), but Rory’s out of options. She’s had a crush on Max since high school and she knows he’s attracted to her, too. But they have history… and Max is the only one who knows why it went south.

They’ve done a good job of ignoring their chemistry so far, but a long road trip in a massive blizzard might be just what they need to face their past… and one steamy, snowy night is all it takes to bring Max and Rory together at last.

My Review:
One Snowy Night was a fun winter themed novella. It’s not a full length book like the other books in this series, but I was happy we got to see a bit more from Rory. Although at the same time I wish it had been longer as it was a tad short and some things happened a bit fast. The plot of this one is that Max and Rory don’t like each other, but also have this attraction between them and now they are forced to spend Christmas eve together in his car while driving back to their home town.

Overall this was just a fun read, a bit too short to really get to know the characters, but it helped we already saw a bit of Rory in book 2. And I liked getting her point of view in this novella. Things did progress a bit fast due to the short length, but I think it is a good addition to the series. The forced proximity of the two characters brought all their issues to the surface and it was nice to see them have the chance to talk things through. And there’s a pet as well in this book that places a role, Carl. Carl was a fun addition, he added some comedy to the scenes at times and he just seemed adorable.

I didn’t quite care for the conflict in this book, it’s a bit similar to the conflict in book 2 at the start. Max still sorta blames Rory for something that happened while they were in high school, but Rory didn’t realize the consequences her actions had and doesn’t know why max is angry at her. The conflict didn’t drag on too long luckily and I was glad when they got it resolved. Although they did went a bit too fast from trying not to like each other to being in love, but I guess that’s the downside of this being a novella. I wouldn’t mind having to spent a bit more time with these two.

The focus is pretty much on Max and Rory and ofcourse Carl. There are a few side characters, but they don’t play as big of a role. But that’s also because of how the story is set-up with them stuck in a car together for the drive home. Both Max and Rory were interesting characters, they both had enough personality to get a view of them. They both had been gone through some difficult times and it was nice to see them find some happiness.

To summarize: this is a fun and quick read. It’s a nice addition to the series and I am glad I read it, although it was a tad short and I wouldn’t have minded spending a bit more time with these characters. Due to the shorter length a few things got resolved a bit quickly. And it was nice to see these two forced together for the ride home and finally get everything out in the open. And Carl, the dog was such a cutie and I liked reading about him. I would recommend this to fans of the series or those looking for a fun Christmas themed novella.

Have you ever read a Christmas book after Christmas?

20 responses to “Review: One Snowy Night by Jill Shalvis”