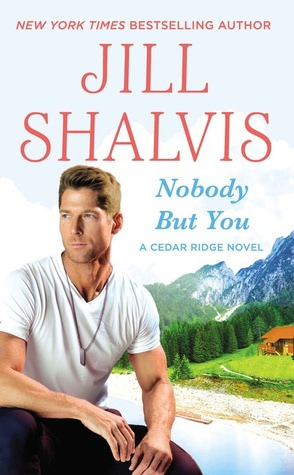 Nobody But You (Cedar Ridge #3)
by Jill Shalvis

After an overseas mission goes wrong, Army Special Forces officer Jacob Kincaid knows where he must go to make things right: back home to the tiny town of Cedar Ridge, Colorado. All he needs to scrub away his painful past is fresh mountain air, a lakeside cabin, and quiet solitude. But what he discovers is a gorgeous woman living on a boat at his dock.

Sophie Marren has nowhere else to go. She’s broke, intermittently seasick, and fighting a serious attraction to the brooding, dishy, I’m-too-sexy-for-myself guy who’s now claiming her dock. Something about Jacob’s dark intensity makes her want to tease—and tempt—him beyond measure. Neither one wants to give any ground . . . until they realize the only true home they have is with each other.

As far as I know this is the third and last book in Jill Shalvis her Cedar Ridge series and I had a lot of fun reading this series. I was really excited to get approved for this book on netgalley and was curious to read the story of the last Kincaid brother. This book has everything I’ve come to expect and like about this series. Great characters, an awesome romance, great side characters and a great small ton setting.

Nevertheless I felt like I enjoyed this book a little bit less than the first two books, I had hoped for more emotions, more about what had happened all those years back and how Hud and Jacob handle it. And it felt like this story played out more apart from the rest of the characters and town as the first tow novels. Part of that is understandable as Jacob hires a cabin next to a lake instead of living in the house with the other brothers and he has been away from Cedar Ridge for a very long time and doesn’t fit in as easily as might want, especially at first. So yes I understand why this one is a bit more separate, but I still had hoped for more interaction with the other side characters as that’s one of the things I loved about the first two books.

I did really like both Jacob and Sophie, the two main characters of this book. They both have a lot of personality, a past they struggle to deal with and think they aren’t ready for a relationship. The relationship plot line is a bit similar to the one of the second book with how they take things casual at first, but slowly it grows into more. I liked Sophie, she has had a tough life and divorce, but she’s trying to find her way now. She does have some issues and I did got annoyed by her a few times, I understand why she was so hard to trust people and got angry when she thought Jacob had lied to her, but really it was her own misunderstanding and I had wished she had admitted that. And there’s a plot line with her next job where I had hoped to see more of, rather than just a word afterwards.

I did really like Jacob, he’s a great guy and he’s so patient with Sophie, he gives her the room and time she needs, but also is there for her. He walked away from cedar Ridge a long time ago and now he’s back, he doesn’t think he deserves love and has a hard time fitting in again and I felt for him. He’s had a hard life and while he’s back, he still struggles. His relationship with Hud is very rocky and I kept hoping for them to make it up, but they are both so stubborn. Then there is the conflict later in the book which felt very out of character for Jacob and I just didn’t buy it, he knew Sophie had trust issues and I just didn’t think he would do that. I slammed my ipad closed and took a break before I could continue.

I did like the romance and chemistry between these two. Jill Shalvis really knows how to write romances and I could feel their connection. They started out with casual hook-ups, but it quickly grows into more and slowly they let the other in. I liked how they talked about things from their past ad understood each other. They were great for each other, it was obvious these two were good for each other. It just took them awhile to realize and acknowledge that too, which I liked to. They take their time and admit falling in love is scary and Sophie has the urge to run away a few times, but Jacob is there to calm her down and it the first to admit he feels more for her and it was so sweet and heartfelt. The romance is filled with sweet, tender and hot moments and I really enjoyed that part.

To summarize: another great book in this series. I was a bit sad with how this book felt a bit more distant from the happenings in cedar ridge and the side characters than the previous books, but it also makes sense why. This book is even more character focussed. Sophie and Jacob both have so things to work through and have been through some difficult things and are still struggling. It was amazing to see them figure things out and find each other. I did like both of these characters, although there was one scene where I wasn’t a fan of Sophie’s behaviour and a conflict scene at the end what I thought was out of character for Jacob. I did really like the romance. This author really knows how to write a good romance. There were sweet, tender and hot scenes and these two where great for each other. I really felt their connection and chemistry and they made for a great couple. This is the first series I read by Jill Shalvis and it definitely won’t be the last.

24 responses to “Review: Nobody but You by Jill Shalvis”