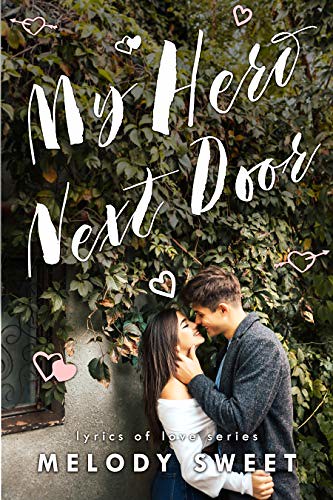 My Hero Next Door (Lyrics of Love #1)
by Melody Sweet

Blurb:
She’s only confident when she sings. He’s following the beat of his heart. Will a moment of impromptu harmony cue a romantic duet?

Ella:
Okay, I’ll admit it. I’m not the most self-confident person on the planet. In fact, I’m pretty sure I have, well… none.

That’s why I followed David all the way to UChicago. He’s my boyfriend. The one with the meticulous plans for our future. If I just cling tight enough to his hand, I can survive anything.

Because the thing that usually calms my nerves—singing to myself in the dorm shower—has just been blown apart by an impromptu duet with a guy over the wall, and it’s making my heart pound like nothing ever has before.

How can one duet send my life into a spiral of confusion?

Cole:
I’m in my last year at UChicago and I can’t wait to graduate and get on with my big dreams, but whoever sang with me over the shower wall… Oh man, I have to find this girl. Something about her voice spoke to me like nothing ever has before.

But she’s shy. Timid. She won’t accept my invitations to meet up in the hallway. And that’s not my only problem.

My roommate’s new girlfriend, Ella, has just moved here and she’s sparking things inside of me I never thought I could feel.

I thought I was set. Happy. But now I’m locked in a battle between pining for Ella and desperately hunting for a shower songbird that I swear could change my life for the better.

My Hero Next Door is the first standalone book in the Lyrics of Love sweet contemporary romance series. If you like offbeat meet-cutes, soulful men to swoon over, and love’s beautiful ballads, then you’ll adore Melody Sweet’s tale of destiny.

PLEASE NOTE:
This book was previously published as Fever by Melissa Pearl. It has been rewritten and re-edited to this sweet romance edition. Enjoy!

I have read other books by one of this author’s other pen name and I was excited to dive into this series now that they’re gettign re-published. I really like this author’s writing style as this book was no exception. But sadly the plot line of this book didn’t fully work for me.

Ella lost her parents when she was young and her boyfriend of 3 years helped her deal with life without them. Now’s she finally joining his at campus in Chicago. This is a big change for her and she struggles to adjust. When one days she’s singing in the shower, a guy joins her in a duet and from that moment everything changes. She also develops feelings for her boyfriend’s best friend and roommate Cole, who is actually shower guy as well, she just doesn’t know it yet. While she slowly grows closer to Cole she has to choose between him and her boyfriend David.

I liked the set-up with the whole mysterious shower guy and girl and how they meet while singing and have a connection while only having heard each other’s voices. I thought this was such a fun and intriguing way for them to meet and I like how they have that connection while singing. I also liked seeing Cole and Ella get to know each other. They are so sweet together and it’s clear they are great for one another.

What I didn’t care for was all the plot surrounding the fact Ella already has a boyfriend. Her boyfriend, David, clearly isn’t right for her, but he also isn’t a bad guy. Honestly I felt bad for him. Ella remains with her boyfriend and tries to make it work, but she doesn’t really try to make it work in my opinion. I wish she opened up to David or told him about her doubts or struggles. Tried to confide in him or improve their relationship. As most of the book she sticks with him, but then never opens up to him. I honestly couldn’t see why they were together, except for the fact that they had been together for years. That seemed to be the only reason they were together and I didn’t feel their romance or connection. David also didn’t really seem to try harder to let Ella in or improve their relationship. I would’ve liked to get at least a glimpse of why they cared for each other or really see them try put in the effort in their relationship. Now David and their relationships just felt like a plot device and one I didn’t particular like. I think I might’ve liked this one more if it felt like a love triangle where the girl really struggles to choose as now it’s obvious David isn’t right for her and she just can’t see it as she doesn’t want to hurt him and he gives her stability. It just didn’t really feel like a compelling reason for her to stay with him and she ended up hurting both guys.

I actually liked Ella for the most part and I thought it was realistic how lost she sometimes feels and how she struggles to adjust to this new change. She has very low self confidence, but I thought this was interesting to see in a main character and it just fit her personality. Cole was a likeable guy as well, he thought he didn’t want a real relationship, but when he grows closer to Ella he realizes he really wants someone to share his dreams with.

While I liked Ella and Cole together and seeing them grow closer. I didn’t like how Ella and Cole are falling for each other while she’s till in a relationship. I get this sometimes happens, but the whole book is about that point and it also gets resolved very late on in the book. I would’ve liked to see more of Cole and Ella their relationship without the cloud of her current relationship hanging over them so I could really get a feel for how they would be together. While I didn’t like the main premise and angst about the situation there were some great scenes. I liked how Cole was there for Ella and really saw her. I also was glad they at least felt guilty for their feelings with Ella still being in a relationship. I thought Cole was a good guy for Ella, but due to the shadow of her current relationship I just didn’t fully warm up to their romance.

One of my favorite parts of the book is later in the book when Ella finally goes and figures out what it is she wants from live. She also stands up for herself and says no to something while this is obviously hard for her to do as she hurts others with it. She really shows some growth in the later part of this book and I think this part was so important for her to go through. I just wish it had lasted a bit longer or come sooner so we really can see her change and deal with this.

There are some interesting side characters, some of which clearly will get their own book. I liked how close Morgan, Jody and Ella were and how they are there for one another. I am not a fan usually of best friends who push the main character out of their comfort zone, but it seems that was what Ella needed at times.

To summarize: I liked the writing style and the set-up, but the sort of love triangle plot line didn’t work for me. I got frustrated with Ella sticking with her boyfriend, while at the same time it felt like she didn’t try and make their relationship better while she was falling for Cole at the same time. Cole and Ella did make for a great couple, but I never fully warmed up to their romance due to the black cloud of her current relationship hanging over them. There are some great scenes between them and I liked how Cole is there for her and they get to know each other. There is a part at the end where Ella really tried and figure out what it is she wants and she grows a lot and that was great to see. I just wish there was more of that and that part had been a bit longer. All in all this book didn’t fully work for me, but I hope I’ll enjoy the next one more.

Grab the first four books in this series for less than $3!

While I didn’t love the first book as much as I had hoped the next two books were really good. And you can get the first four books for less than $3 which is an amazing deal. I definitely recommend grabbing this chance and buying these books. You can read my review of My Superstar Romance (Lyrics of Love #2) and My Change of Heart(Lyrics of Love #3). Or wait till I post my review on my blog. This discount only lasts till tomorrow, so make sure to grab your copies now! 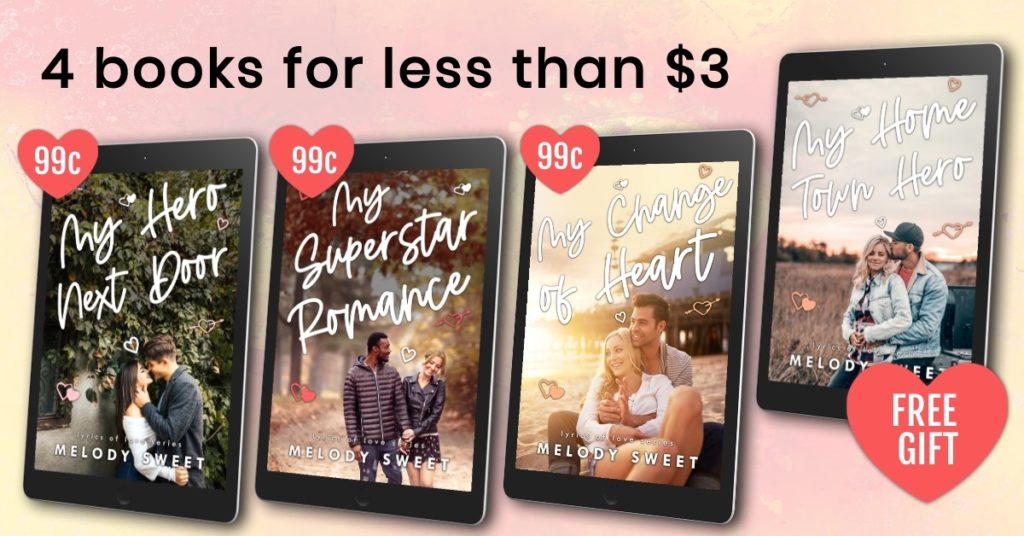 2 responses to “Review: My Hero Next Door by Melody Sweet”