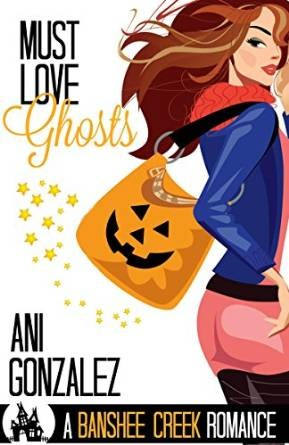 My Review:
Must Love Ghosts is a fun and lighthearted romance novel with a bit of heat and a hint of the paranormal. I had fun reading this one and while it didn’t completely wow me, I am still glad I picked this up and am planning to read more by this author. This book is as fun and cute as the cover suggested. There’s also a bit of heat to the romance, which I hadn’t expected, but fit the book nicely. The paranormal aspect was very mild, mostly hints about it and a scene at the end. The setting of Banshee Creek was a lot of fun and I hope to return soon to this town!

For some reason I thought this book was about a girl falling in love with a ghost, yes I probably didn’t read the blurb too well, but the cover grabbed my attention and the box set was only 0.99$! So I grabbed it without reading the blurb too closely. This book is actually about Abby who’s fiancé has died two years ago and she is now in love with her best friend Mike, who comes to visit to banshee Creek with leads to some fun scenes. The town of Banshee Creek has a big Halloween party and they love all things paranormal. But there’s very little actual paranormal in this book, mostly hints about what the towns people believe in and stories and a few mentions of things that might be supernatural in origin. I didn’t mind that too much, but I had expected more paranormal. It reads more like a romantic comedy or a contemporary romance set in a Halloween town most of the time than a paranormal book.

Abby the main character believes in everything supernatural and she likes to sing and hopes to make a career out of it. She was quirky with her unicorn sleeping bags, her house decorated with vintage items and her love for everything supernatural. And donuts! This book made me crave donuts. She was a character who went after what she wanted and wasn’t afraid to voice her opinion. I liked her.

Then there is Mike who was the best friend form Cole, Abby her dead fiancé. Mike has always worked for the army and now is taking a break to deliver something to Abby. I am normally not a fan of books with death previous love interest as it feels like part of the character their heart will always belong to them. I thought here it was pretty done well as Cole has been dead for two years now and Abby had healed and is ready to start a new relationship. But I still wasn’t too happy with the bit of conflict surrounding that. And the delivery Mike has to make is this big things in his mind and it felt a bit blown out of proportion. Mike seemed like a nice enough guy, although I did feel like we got a better feel for Abby.

Abby and Mike have known each other for a long time. This meant that the romance developed quite fast, a bit too fast to my opinion as I didn’t fully feel their connection and how they already knew each other. So must of their friendship develops before this book and we only get to see the point it turns into romance. I liked these two, but I never got fully invested in their romance. There is very little drama, which I did appreciate. There is a bit of conflict surrounding Mike being Cole his best friend and how he still sees Abby as Cole’s girl and the object he has to deliver. The conflict didn’t fully work for me. I did enjoy seeing Abby and Mike together and how they worked things out. The romance also had a bit of heat, lots of flirting and touching and talk about sex, but the actual sex scenes are behind closed doors.

My favorite part of this book was probably the setting in Banshee Creek. It just seemed like this quirky town were everyone believed in the supernatural and with the costume party, the mothman hunt and the interesting cast of side characters it really brought the town alive. I also liked the owl that made an appearance and the last scene was interesting.

To summarize: this was a fun and light read with some romance and a hint of paranormal. It isn’t really a ghost story as the title suggested and the paranormal element is very mild. The town of Banshee Creek does really play up it’s love for everything supernatural and the setting was one of my favorite parts of the book. I liked Abby the main character, she was quirky and open. She voiced her opinion and went after what she believed in. Mike was okay, but I felt like I got less of a feel for him than Abby and I just didn’t like him as much as Abby. The romance was nice, but most of their connection is built off screen and we only see how it develops into a romance here. I never got fully invested into the romance, but I did like reading this book. All in all it was a fun read and I am curious to read the rest of the books in this series.

Do you like reading books about ghosts? What was your latest read with ghosts?

22 responses to “Review: Must Love Ghosts by Ani Gonzalez”