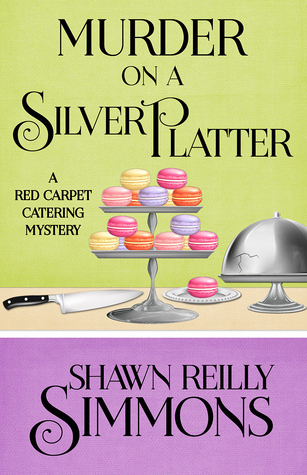 Blurb:
Penelope Sutherland and her Red Carpet Catering company just got their big break as the on-set caterer for an upcoming blockbuster. But when she discovers a dead body outside her house, Penelope finds herself in hot water. Things start to boil over when serious accidents threaten the lives of the cast and crew. And when the film’s star, who happens to be Penelope’s best friend, is poisoned, the entire production is nearly shut down.

Threats and accusations send Penelope out of the frying pan and into the fire as she struggles to keep her company afloat. Before Penelope can dish up dessert, she must find the killer or she’ll be the one served up on a silver platter.

The catering business combined with the cozy mystery genre make me think this would be a fun read. Too bad it fell a bit flat for me. The catering business was something I did like, it was interesting to get a view of how that worked and I liked that the main character was a chef and business owner. I also thought the movie filming setting was interesting as I know very little of that it was interesting to get a glimpse of that work. I also thought it was fun with how the main character actually was more of a side character if that makes sense, her best friend was the one who played in the movie and where the killer was after and she was more on the sidelines, which I liked and made for an interesting perspective.

So someone get’s killed close by where the main character and her best friend live. The main character finds the body and wants to know who killed her. Then her best friend seems to keep getting in accidents and they suspect it’s not really an accident maybe. There are a few clues the main character picks up and she helps solve the mystery a bit, but I wasn’t really a fan of how the mystery was handled. It felt like it stayed a bit on the sidelines and the actual resolution to the mystery felt a bit lame. The reasonings where a bit far fetched and it made me a bit sad a girl was killed because of that, it just felt silly. I had guessed correctly who the murderer was and thought it was kinda obvious with how that person acted.

I liked the characters well enough, but didn’t really care for them. I did like how the main character was a chef and owned her catering business. I didn’t really care for her best friend. There is a big cast of side characters, but they all stayed a bit flat. I never felt like I really could connect with them or cared about them. So that made it hard to fully enjoy this book.

There is a bit of a romance, but it doesn’t really pick up until the end of the book and I think it will be more important then. There was a hint of a love triangle, but it was obvious who the main character was interested in. So I wasn’t really sure why the other guy was necessary and I felt a bit sorry for him. There are some actions of characters and scenes that felt just a bit off, a bit unrealistic or weird. same with the romance there’s this scene she kisses someone and someone else notices it and then they never talk about it anymore.

Also something worth mentioning is that this book was pretty different from most cozy mysteries I read, most of those have a small town setting. This one didn’t really focus on the setting, but more on the jobs of the characters and their relationships. It was an interesting approach, although I would’ve liked to get more of a feel for the setting and it lacked that cozy and comfortable feel as it was set in a big city instead.

To summarize: This book didn’t fully work for me. I liked the catering business and movie filming part of the story and learning more about those two topics. The mystery fel a bit flat to me, there wasn’t much focus on the mystery and I guessed early on who the murderer was. I didn’t really care or connect with the characters, which made it a bit more difficult to get into the story. there’s a hint of romance, which probably will be developed more in the next book. I thought it would go into love triangle direction for a bit, but by the end of the book I was pretty sure it wouldn’t go there. The setting isn’t a small town like most cozy mysteries, but a bigger city. I would’ve liked to get a bit more of a feel for the setting, but it was interesting to have a mystery book set there. It did lack the cozy and comfortable feel a bit. It’s more a 2.5 stars, but rounded it up as I didn’t really dislike it, but more that I didn’t really care or get into the story.

What’s the last book that didn’t fully work for you?

10 responses to “Review: Murder on a Silver Platter by Shawn Reilly Simmons”