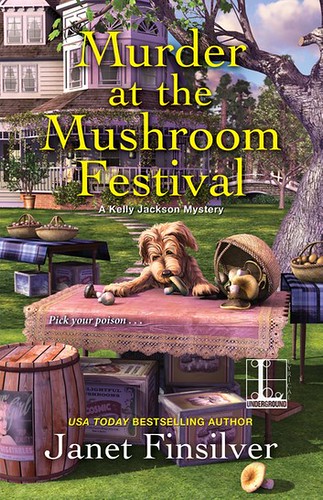 Blurb:
There’s a corpse among the chanterelles!

Redwood Cove Bed and Breakfast manager Kelly Jackson is hosting a cooking class during the Week of the Mushroom festival to attract guests, not drama. But soon after she finishes foraging for an edible mushroom species on sacred Native American land, a local newspaper reporter gets shot dead at the same site. With suspicions spreading like fungi in the quaint Northern Californian community over the culprit’s identity, Kelly and a savvy gang of sleuthing seniors known as the “Silver Sentinels” must uncover the truth about the secluded property before a tricky killer prepares another lethal surprise . . .

After reading book 3 in this series I was determined to get caught up with this series again and not much later I picked up book 4 and started reading it. Murder at the Mushroom Festival is another great installment in this series. While the mystery didn’t grip me as strongly, it was a lot of fun to be back in this town with the familiar group of characters.

I can’t fully pinpoint why, but the mystery in this book wasn’t gripping me as much. It wasn’t as int interesting and I never really got invested and tried to guess the murderer. There are a bunch of suspects from the start and while the main characters make some progress throughout the book it felt very slow going and then toward the end suddenly everything came to light. There was an interesting twist toward the end that I liked. I also liked how Daniel being a suspect got the main character involved and made her try harder to solve it. She also doesn’t really solve the mystery, but the killer reveals themselves to the main character.

While I like the writing style, at times some scenes can feel a tad rushed, like they are wrapped up too quickly. I feel like some of those could just be skipped and summarized or given a bit more attention. But luckily this only happened a few times.

The theme of this book was a fun one with the mushroom festival going on. There is a lot of focus on the mushrooms, mushroom hunting and some activities that are going on in and around the town. There is also a bit about the redwood trees, involving sinker logs and the characters explore the surrounding area’s a bit during the mushroom hunt. I didn’t know a lot about these topics, so it was fun to learn a bit more about them.

What I liked most about this book was spending some time with the by now familiar characters. I like the main character and how she has found a new home in this place and enjoys running the inn. I like her very slowly developing romance with Scott. This is very much a side plot line, but so far I like them together. Scott seems to worry and care about her, but not tell her what to do.

And then there are the side characters ofcourse. This book has a big group of side characters, but I have no trouble by now remembering who is who. From the sheriff to the silver sentinels who help her solve the mysteries to Helen and Daniel who both work close by and they both have a kid Tommy and Allie. Then there is Andy and Philip who do the whine and cheese for the inn. This book involved all of these characters again and more. The professor’s brother is in town with a friend. And there is a characters helping with the mushroom festivities. I like reading about these characters and seeing them interact.

To summarize: Another great read in this cozy mystery series. The mystery in this one didn’t grip me as much, but there was an interesting twist at the end. I liked learning more about the redwood trees, mushrooms and mushroom hunting. My favorite part is following the familiar group of characters along. This series has a huge amount of side characters, but they all add to the story and are great to read about. All in all another fun read and I look forward to the next one.

4 responses to “Review: Murder at the Mushroom Festival by Janet Finsilver”