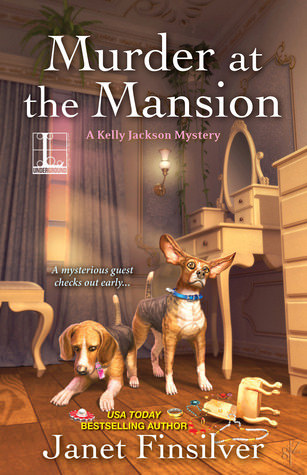 It’s whale-watching season in Redwood Cove, and B&B manager Kelly Jackson’s battening down the hatches for the tourist rush at Redwood Heights—a Victorian-style estate owned by her boss. And due to recent jewelry thefts, her duties include keeping track of the many dust-covered artifacts spread throughout the property. But when Kelly finds Sylvia Porter’s lifeless body, menial tasks don’t seem so terrible. Enlisting the help of a ragtag group of brainy retirees, aka the “Silver Sentinels,” Kelly’s on the hunt for clues hidden behind the mansion’s glamorous façade. . .and for a killer who may want to make history of her next

Overall this was a fun sequel and I enjoyed returning to this series. But at the same time some things I didn’t enjoy as much as I hoped to. I struggled getting into this book, there were a lot of characters and I didn’t fully remember at first who was who, so it took me some time before I remembered who everyone was. And then we get a bunch of new characters as well and it was hard to keep them all separate for a bit. I also was a bit sad that this book doesn’t take place more at the B&B, I was looking forward to see Kelley start her new life there, but instead there is a mansion close by where a lot of the mystery took place and Kelley is helping do inventory there instead of working at the B&B as that was getting renovated. I did end up enjoying it eventually, but at the beginning I was a bit disappointed.

It’s one of those books that does get better as it progresses, after the bit of a slow start for me, the pace picked up and I enjoyed the mystery. There was something that bothered me at first as it felt a bit unrealistic, but it later ties into the mystery. It still felt like that part was added in just so the main character could find something later, but maybe that’s just me.

The mystery was nice enough, even though it didn’t fully hook me. It starts with the victim still alive and it was obvious who was going to be the victim. Then at first it seemed there were too many possible culprits and not enough clues, but after that things start coming together. I wasn’t too surprised by who the murderer was and the whole reason surrounding it just felt a bit off, although I did like the link to the past and how that tied into the mystery. But even though I wasn’t surprised by who the murderer was I also felt that looking back there weren’t a lot of clues specifically in this persons direction, more some general clues about the length of the person etc.

But for all the things that felt a bit off or I didn’t enjoy as much as book 1, there were also some things that I really enjoyed about this book. The characters and their friendship and interactions are definitely one of the highlights. Kelly make some good friends in the first book and we get to see most of them again and I really liked the cozy and close feel of this town. And the Silver Sentinels help again with the mystery. There are some scenes were she is enjoying the company of her friends that felt very happy and it was nice to have those scenes as well. I also liked the new character we met in this book Stevie with his two Beagles. I like how the most of the side characters and even the animals feel real. Too bad the new characters we met at the mansion stayed a bit flat. I don’t really care for the romance, but luckily it’s only a few small scenes and not much happens between them.

To summarize: I enjoyed returning to this town and the tight group of friends. It was a fun read, but I felt it wasn’t as good as the first book. The setting changes slightly and now takes place at a mansion and while I understood why, I would’ve liked to see more of the B&B. The mystery had some nice ties with some historical events and it was interesting enough. Who the murderer was didn’t surprise me, but at the same time there weren’t as many good clues in this person’s direction. I don’t really care for the romance. I do like most of the characters and I like seeing them interact. There are some great side characters and I enjoyed reading about them and this small cozy town.

What’s the last book with a mystery you read?

24 responses to “Review: Murder at the Mansion by Janet Finsilver”