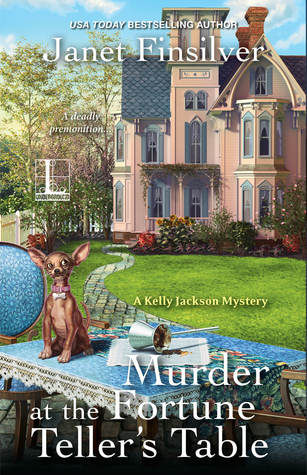 Blurb:
Poisons, prophecies—and a peculiar past . . .

When a local woman begins searching for a couple she hasn’t seen since the 1960s, Redwood Cove Bed and Breakfast manager Kelly Jackson and the crime-solving group, the “Silver Sentinels,” are quick to help out. They’re also quick to guess that they’re in over their heads after the woman is found dead beside the body of a Greek fortune teller—and a fellow Sentinel gets attacked. As Kelly juggles work and her responsibilities at a food and wine festival in town, she and her sleuthing posse must confront a killer obsessed with old secrets . . . and solve a murder mystery more than fifty years in the making . . .

I received a free copy of this book from the publisher through netgalley and voluntarily reviewed it.

I’ve been in a cozy mystery reading mood lately, so when deciding what to read next I came across this one and decided to finally continue this series. I’ve fallen behind a bit, but after finishing this one I am determined to catch up again as I had fun reading this one. There’s a solid mystery and I love the core group of characters that are back in each book.

Murder at the Fortune Teller’s Table involves as the title suggest a murder involving a fortune teller. Two dead bodies are found in this book and the police thinks it’s an accident. The Silver Sentinels, a group of crime solving people, think it was murder. Main character Kelly and the Silver Sentinels set out to get to the bottom of the mystery. Add in one of the Sentinels who gets attacked and a promise to help Summer and contact some people for her, family secrets that come to light and this mystery is an exciting one with enough going on.

This is another solid mystery. I like how Kelly and the Silver Sentinels are on the case. They distribute tasks and come together regularly to discuss their findings. I like how the set-up is slightly different than most cozies with the main character being part of a group and not going after all the leads herself. After a while they manage to limit the pool of suspects a bit, but there are still plenty suspects left. It also made sense why the police didn’t get involved as to them it was clear it was an accident. I had my guess as to who was the murderer, but wasn’t fully sure yet, but my guess turned out to be correct. After the first few suspects got eliminated it was hard to pinpoint things further until things come to light at the end, but this made for a suspenseful mystery as till the end I wasn’t fully sure who had done it.

Besides the mystery this series has enough other plot lines going on. From how Kelly is settling in with her role as manager for the B&B and finding her place in the community. To a slowly blossoming friendship between Kelly and Scott, which might lead to more. Then there are the side characters like Tommy, Allie, Daniel and Helen who make an appearance in every book. The silver Sentinels who are a big part of each story. A fun cast of dog side characters as well, which varies a bit every book. This book introduces us to the dogs Princes and Sergeant and later Jake as well. There also is a Flower and Wine festival coming up, as well as the usual comings and goings of the B&B. There is a bit about a new project Scott is managing close by and some llama’s. I think we’ll see more of that in future books.

I like how the story alternates between the mystery and other plot lines. We see enough of Kelly’s job as a B&B manager, her place in the community and her relationships with other characters. And also have plenty of focus on the mystery and other happenings. There are a few times when a side plot line feels tad rushed, but these are only minor instances where a scene seems to go a bit too fast. Everything gets wrapped up well by the end. The author manages a good balance between the different elements and I like the cast of both human and canine characters. Kelly is a likable main character and I like reading about the silver sentinels and the other recurring side characters.

Now that I finished this book and am reminded of how much I enjoy this series, I am determined to go and catch up on the rest of the series. I just bought book 4 and 5, so I hope to get to those soon.

To summarize: This was a fun read. Murder at the Fortune teller’s Table involves two deaths which are ruled an accident by the police, but the Silver Sentinels believe it’s murder. It has a solid mystery with plenty of suspects and some other suspicious elements and twists and turns as well. I managed to guess the murderer right, but I wasn’t 100% sure as there were a few other possible suspects that weren’t ruled out too. I like the combination of a solid mystery as well as some side plot lines about the characters and the daily life of main character Kelly while managing the B&B. It has a lovely group of characters both human and canine. I really enjoyed this one and am determined to try and get caught up on this series again.

2 responses to “Review: Murder at the Fortune Teller’s Table by Janet Finsilver”