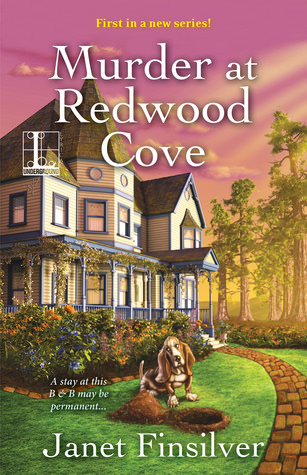 If it weren’t for the fact that she’s replacing a dead man, Kelly Jackson would love her new job managing the Redwood Cove Bed and Breakfast on the coast of Northern California. But Bob Phillips did plunge off the cliff to his death…and Kelly’s starting to think it may not have been an accident. Bob’s retired friends—The “Silver Sentinels”—are also on the case, especially when Kelly is attacked…and another body turns up. Kelly has her hands full with overseeing the B&B’s annual Taste of Chocolate and Wine Festival, but she’s also closing in on the killer…who’s ready to send Kelly on her own permanent vacation…

This sounded like a fun cozy mystery and I am so glad I got approved to read and review this one netgalley. It’s just a bit different from most of the cozy mysteries I’ve read and I really enjoyed it. firstly it’s told in the first person point of view, this is the first cozy mystery I’ve read that did that and I thought it really worked well. Then there was the mystery, Bob the previous manager of the Bed and Breakfast died in an accident, but a group of senior citizens are convinced it was murder. So the focus was more on proving Bob had been murdered and finding the murderer. I though it was a nice twist and made for a fun storyline.

The mystery kept me guessing, there are four suspects from almost the beginning and it’s hard to narrow the suspects down as they all seem to be on the scene or have had access to certain information, so until the very end it stays a mystery who has done it and why. And then there are two delightful plot twists towards the end, which were so well done and where so different from what I expected. Bonus points for that! I love a mystery that can take me by surprise like that.

This book had a fun cast of characters, from Helen to her son Tony and his adorable dog Fred and the group of senior citizens who help solve crimes and such the Silver sentinels. I really liked all these quirky characters and how they brought live to the book. The sheriff isn’t convinced Bob has been murdered and I actually thought from his point of view it made sense why he stayed with that point of view until there was really evidence and by then he was the first to run into action. It was great to see Kelly, the main character jump on the case and while investigating and running the bed and breakfast she slowly grows fond of the place. I also felt like we got a feel for her character and we learn a bit about her past as well. I liked how she was dedicated to solving this mystery, but also was responsible, didn’t rush into things and gladly asked others for help. I liked how she listened to the Silver sentinels and took them serious and also took time to pay attention to Tony and his dog. Tony and his dog where two of my favourite characters in this book and they also play a vital role in the plot.

To summarize: I really enjoyed this book! It’s told from first person perspective, which really worked for me. And the mystery was done well and kept me guessing. I also liked how it started off as an accident, but there were hints he might have been killed. There are two great plot twists towards the end that took me by surprise and I thought they were well done. I liked the main character Kelly and the side characters brought this story alive as well. There are the Silver Sentinels, Tony and his dog, other members of the community, Helen and Daniel and Tony his friend Adie. Kelly was a great main character with how she was dedicated to solving the mystery, but also level headed. The coastal bed and breakfast setting and small town community were great too! All in all this was a great start of a new series and I am looking forward to the next books in this series!

Have you read a cozy mystery from first person perspective? If yes which one? What perspective do you prefer?

8 responses to “Review: Murder at Redwood Cove by Janet Finsilver”