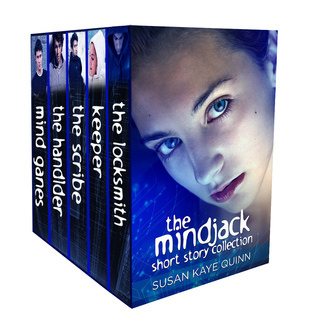 SUMMARIES OF STORIES
Mind Games: Raf, a regular mindreader, wants to take Kira—the only girl in school who doesn’t read minds—to the mindware Games, but his friends have other plans.

Leaving Gurnee: flash fiction of a scene that occurs between Open Minds and Closed Hearts, told from Xander’s point-of-view.

The Handler: The first recruit in Julian Navarro’s mindjacker revolution threatens to derail his plans to ensure jacker freedom in a mindreading world.

The Scribe: Sasha Rimbali stopped using his mindjacking skill to erase souls in order to keep from going mad, but when a beautiful female jacker is threatened, he has to decide if there is any cause worth the cost of using his ability one more time.

Keeper: Seventeen-year-old Kira Moore is determined to be part of the second-chance mission to free her fellow mindjackers from FBI Agent Kestrel’s secret prison, but Jacker Freedom Alliance leader Julian believes she’s too valuable to risk in the operation.

Seeds of Promise: Anna Navarro, leader of the Jacker Freedom Alliance, spends her time in FBI Agent Kestrel’s secret prison enduring his torments… and awaiting the time for her revenge.

Locksmith: In a world filled with mindreaders, Zeph is a mindjacker who wants to stay hidden—even if it means the cute mindreader in his Latin class is forever out of his reach. He locks and unlocks minds for a ruthless mindjacker Clan in exchange for protection and the chance to have a normal life with his parents and little sister. But when a girl he doesn’t know reveals the existence of mindjackers to the world, Zeph is forced to make a choice: unlock—and ultimately destroy—the mind of a young jacker changeling… or turn his back on everyone he loves.

Mind Games
I really enjoyed this novella. We get to see Raf his point of view and how mindreaders think and treat Zero’s, it’s really appalling to see how they think of zero’s and also a bit about Raf as he’s having feelings for them. It really shows how the society things about zero’s. It’s a nice addition to the series.

The Handler
I really enjoyed this novella, we get a feel for Julian, his mindjack power and the start of the revolution and the why behind it. I felt like we got a good feel for Julian his character in this novella and I feel like we understand him better now and why he is so determined to get this plan of revolution started. We also see Anna and Sasha and understand how they got involved with the movement. And Julian has to make a difficult decision in this novella. I also liked how this novella illustrated how powerful and frightening the mindjack powers are. A great addition to the series!

The Scribe
I really enjoyed this novella/ Sasha stays very mysterious in the full length novels and I enjoyed getting his point of view. I thought it really added something and I got a good feel for his character and it was interesting learning more about Sasha and how his ability works. It shows an interesting point of view we never get int he full length novels and shows us the beginning stages of the revolution and also how Ava joins. There’s a difficult decision Sasha has to make in this one and it’s even a bit dark and shows the frightening impact of Sasha his mindjack powers on others and the effect using them has on him. And I really liked seeing Ava though Sasha his eyes.

Keeper
Keeper is a nice short addition to the Mindjack series. I would recommend this short story for fans of this series. It gives some extra background and depth to Kira and her new powers.

The Locksmith
This is a fun little novella set in the Mindjack world where we get to know Zeph, what he can do and the situation he’s in. I read this in one sitting and after finishing it I can only say I am looking forward to more Zeph and am excited Susan is writing more books about him. There is a mention of Kira, but this novella can be read as a standalone or anywhere in between the other novels and novella’s in this world.

Deleted Scenes – two scenes from Free Souls
These were two scenes that got deleted from the final edition of the book. I did enjoy reading them and it was interesting to have read these scenes, but they also aren’t as vital to the plot so I guess that’s why they got removed. Still I am happy this way we still get to read these tow scenes. The first one Kestrel’s Interrogation gives us a disturbing view into Krestel’s mind. The other scene Drinking the Water shows a conversation between Julian and Kira and I did enjoy this one and it made me curious what the effects of the water will be.

Flash Fiction – Leaving Gurnee, Seeds of Promise
These two flash fictions were really short, but still added a bit to the main story. They aren’t long enough to really say a lot about, but I was still happy we got these two stories. Leaving Gurnee is about Xander, I couldn’t remember much about the first book and how these events tie in with the rest of the story, but it does show an event we don’t get in the book.

Extra’s:
Then there is a small piece about Jackertown slang, not all of which end up in the full length novels and a conversation between Julian and Raf, which was quite interesting and fun to read. This never happens in the story, but it was a fun what if these two talked with each other about Kira.

To summarize: I really enjoyed the Mindjack series and it was great to be back in that world for a bit with this short story collection. Mainly it gives us the background story from some characters who’s point of view we don’t get in the book: Raf (Mind Games), Julian (The Handler) and Sasha (the Scribe). Then there is a short story from Kira her point of view (Keeper) which shows us some events that explain Kira her new power. And a short story that is a set-up for a new spin-off series told through Zeph’s point of view (The Locksmith). All in all these were all great short stories, they aren’t necessary to read to enjoy the main series, but I did think they added some interesting bits and I am definitely happy I read these. I would recommend this short story collection for fans for the series or for people who are new to the series to read alongside the main series.

Do you enjoy short stories as part of a larger series?