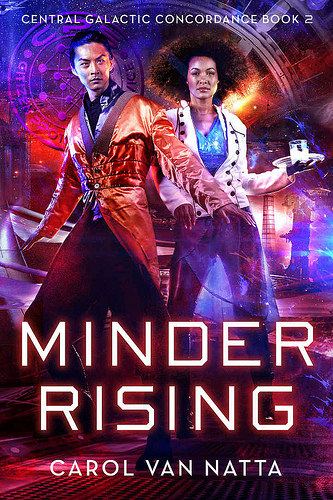 Blurb:
A millennium into the future, all children are tested for minder talents, and the best are recruited for the Citizen Protection Service.

Agent Lièrén Sòng is recovering from a near-fatal crash. He should want nothing more than to get back to using his talents to interrogate criminals for his covert CPS field unit, but being sidelined gains new appeal when he makes friends with a woman and her son. Imara Sesay, road crew chief and part-time bartender, breaks her ironclad rule never to get close to customers when she asks Lièrén to teach her son how to control his growing minder talents.

Unexpected deaths in his field unit make Lièrén suspect he isn’t a lucky survivor, he’s a loose end. He should pull away from Imara and Derrit to keep them safe, but when the local CPS Testing Center is entirely too interested in Derrit’s talents, Lièrén must make an impossible choice. Can he stay alive long enough to save Imara and her prodigy son?

I enjoyed Overload Flux, the first book in this series so much, that I dived right into book 2 after I finished it. Minder Rising has a very different tone and focus than the first book in the series, but I think the different approach totally worked here. We get to see a whole other side of the universe and a different perspective and it was great!

I had a great time reading Minder Rising. Minder Rising is quite gently paced and I mean that in a positive way. The plot points slowly emerge and progress and I loved seeing how it all played out. Where in book 1 the focus is more on the suspense and mystery and there’s some action as well. This one is focused more on the characters and their stories and a hint of suspense. Which works great for this story and I really enjoyed the book and I thought it was interesting how different the tone was compared to book 1.

It’s told from dual point of views, Lièrén got hurt in an accident and slowly he starts finding out truths and discovered that makes him doubt the CPS a bit more. Where Imara has a son who has a very strong minder talent and later in the book he has to go in for minder testing and the CPS becomes very interested in him.

I loved the character driven nature and the gentle pace of this book. I didn’t connect as fast with the two main characters as I did with the main character in book 1, but the more I read the more they grew on me. And by the end of the book I was really fond of Lièrén and Imara and the side characters Derrit and Rayle were great too. The character really come to live in this book and I enjoyed reading about them and seeing them all interact with each other.

It was interesting to see Lièrén slowly figure out the truth of what happened to his field team unit and also some things that were going on in the CPS. He is quite the naive character at first and it’s sad when that gets broken and he realizes what’s really going on around him and how much he didn’t notice at first. I liked how his personality was this fun combination of quirkiness and a sort of formal polite behavior that was uniquely Lièrén. At the end of the book he has to choose between his job and helping the women and kid he grew to care about and I was so curious to see how it all would play out. And I can only say that the conclusion was very satisfying and resolved all the plot point in a great way.

Imara is a great character too, she cares a lot about her son and she is a very confident and capable character. I liked her filer minder talent, which seems so handy and fit her. And there’s a great twist surrounding her character later in the book. I liked how determined she was to do the best for her son, with working two books and also what she does later in the book to protect him. It really shows how far she is willing to go for him. I liked seeing that. Derrit was fun to read about too, I liked seeing him interact with his mother and Lièrén.

The romance is a very slow burn, but it worked here. I liked how they slowly got to know each other and even when they realized their mutual attraction it took them a long time to act on their feelings. I wouldn’t have minded a bit more time seeing them as an actual couple as now there were very few scenes with that. And they made for such a great couple, I just wanted a bit more of it. But I am hoping we’ll get to see them again in later books. I did think they were great for each other and this author really writes her romances well. Imara resists Lièrén for a long time because he is a transient, but she falls in love with him anyway as her heart doesn’t listen to her head. And Lièrén knows his job will take him away from here and while thought he was fine with that he realizes he wants more out of his life.

While it’s set in the same world as book 1, there is very little connection between the two books so far, but there are hints in how it all ties together. I think there is an overarching plot line that’s slowly emerging and the main telling about that is done in the epilogues actually. There were a few times where they mentioned the case Luka worked on in book 1 as that’s connected to Lièrén as well and Imara has met Luka, but that’s basically it. I am very curious to see how the series progresses and if we will see the main characters from the first two books again.

I loved how we learn more about the world in this book. Because of the different setting and focus and Lièrén working for the CPS, so we learn a lot more about the CPS. It also was great to see more of this big planet which was the center of all the politics. It was a very different part of the universe we got to see and at the end there is a bit of other parts of the galaxy we get to see as well, which was pretty intriguing. The whole world feels so real and well thought out, even tough there is still so much to discover, which makes me even more excited to read more books in this series.

To summarize: this was another awesome book. It has a gentle pace and slow build romance that totally worked here. The tone and focus of this one is very different than book 1, but I liked how this provided a very different feel of the world and what’s going on. While the main characters took some time to grow on me, by the end I was really fond of them and was sad to say goodbye to them. The slow build romance fits the pace of the book, although I was sad we didn’t get to see more of them as a couple. The storylines surrounding Lièrén and the CPS and some difficult decisions he has to make were very interesting and I also liked how the plot line surrounding Derrit’s minder talents progressed. This book gives another view of the world and I enjoyed my time spent with this book and learning more about this world. All in all this was a great book and I am hoping to pick up the next book soon.

Tell me about a slow paced book that read recently that you enjoyed?