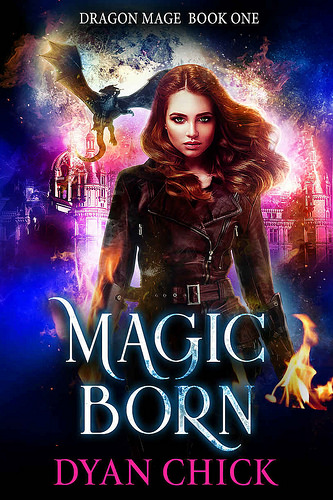 Blurb:
Morgan Drake has spent her entire life in the shadows. A rampaging dragon is about to change all of that forever.

Morgan Drake wants as little to do with the magical community as possible. That’s why she gave up her official Mage roots to work for a Vampire crime lord. She has to make a living though, so she helps her boss uncover valuable magical objects. If she had any other skills, she’d leave the magical community forever and live in the human world, but her fate seems to be straddling both sides.

When an escaped dragon rampages through town, her vampire boss and mentor, Jimmy, is murdered in the chaos that follows. And worse, security footage sets Morgan up to take the fall. Now, she’s going to have to find a way to clear her name and find out the truth. In Realms Gate, the magical city hidden from the human world, the truth has a way of getting people killed, though.

Time’s running out because if she doesn’t clear her name before the Hunters get to her, she’ll lose more than her freedom, she’ll lose her magic as well. And the police from both Realms Gate and the Human world are on her tail. With her only allies being a brand-new vampire and a very old dragon shifter that she just met, the odds are stacked against her. Even if she figures out the truth, the trick will be to survive, and the only sure thing is that nothing will ever be the same. To have any chance at all, she’ll have to come to terms with her past, magic and all.

Dragon Mage is fast-paced Urban Fantasy mystery with an unforgettable cast of characters. This is one series you won’t soon forget.

My Review:
I’ve been in a bit weird reading mood and not finding anything that really grips me, so that might’ve influenced my enjoyment of this book. I was hoping urban fantasy was the genre I was in the mood for and that this book would help pull me out of this weird reading mood, but sadly this book failed to full pull me in. Having said that, I do think it’s a decent read. It has many elements in you find in most urban fantasy books and it’s a quick and relatively fast paced read. All in all it wasn’t a bad book, but not a really good one either, if that makes sense?

Magic Born follows the story of Morgan Drake, who has a bit of an unusual job. She goes through estate sales and the like and finds magical objects. Which she then buys and sells in the magical community to the vampire she works for or other interested parties. I liked the set-up of the book and Morgan’s unlikely job and how it was a bit of a gray area of what she did with bring magical objects in the hands of those who couldn’t create or use magic. I wouldn’t have minded reading more about it. But this is only the background and everything changed when she brings a dragon statue home to her boss.

Morgan lives in the city of Realm’s gate, a magical city hiding in plain sight. I never fully understood how that worked and the bits we get to hear about it weren’t enough for me to fully bring it alive. Like how did they get food and supplies and how did no one realize there was a huge city hiding there as that must be a big area of space the humans are missing? But the focus is more on the story than the world building. And I did like the overall idea of paranormal hiding in magical cities.

The story started off pretty good, with us getting a feel of Morgan’s job and her situation. Then the mystery starts and I was curious how that would get resolved. But then the book sort of lost my attention and I never fully got into the story. The way things get resolved felt a bit anticlimactic and sudden and there are still a lot of lose ends, but I am figuring that will be resolved in later books. In that regard it very much feels like the set-up for the rest of the series.

The mystery wans’t as good as I had hoped, but then again I shouldn’t expect the mystery in a fantasy read to be as good as in a mystery or suspense book. There was no way to predict who was behind it before it got revealed. And the motivation behind it is still unclear. Although there was a bit of an interesting development regarding the mystery and the length they went to, to pull this off.

Morgan was an okay enough main character. I liked how she did what was necessary to clear her name, but also worried about her situation and when she had a moment to think grieved for what she lost. Then in other moments I did not get her at all, like how she wanted to rush in some situation without a plan and then the next moment berating others because they didn’t have a plan. I did like how she cared about Alex and helping him. I just never fully warmed up to her or felt like I really got to know her. It’s mostly a story driven book with the characters and world building taking second place.

There is a hint of a possible romance, but too be honest the whole situation surrounding the love interest James made me uncomfortable. He violates her privacy and trust in a pretty bad way and she forgives him pretty quickly after he apologizes. I had a hard time feeling the romance, knowing that happened and the character brushed it aside so easily which just felt off.

There are some side characters who are okay enough. From all of them I probably liked the vampire Alec the most with how he stuck with Morgan and helped her even tough he hardly knew her. I am not sure how she suddenly gained a friend at the end as it felt a bit weird how that character was suddenly willing to put her life on the line for the main character. Although I think they have some sort of past, that never fully got explained and I didn’t really notice that in their interactions. And the main character was a bit rude to her at times even with the side character helping her.

And multiple characters asked the main character if she trusted them and I always feel that asking that question is so unrealistic. It’s something you only hear in books and movies. And there were multiple situations were instead of just explaining things quickly they said to trust them and they had a plan, but they had enough time to quickly explain things instead of talking about trusting them. It just felt like an excuse not to reveal too much or try and keep a level of surprise, which just felt fabricated this way.

The world building is pretty limited and we only learn a few things like lot of paranormal creatures exits and before I fully got the hang of the world we got information and reveals, that lacked impact because I didn’t feel how rare or unusual that was. There is something interesting about the main character powers that gets mentioned and I was kinda curious how that tied into the mystery plot line, but we don’t find out all the details in this book.

To summarize: Magic Born is a typical urban fantasy read with a few unique touches, which will work in a pinch if that’s what you’re in the mood for. Sadly I’ve been in a weird reading mood and this book failed to pull me out of it. I liked the set-up, but the book failed to hold my interest and in the end it just felt flat. It is not a bad book, but I just wasn’t feeling it. It’s a pretty fast paced and story driven book, but I felt the character development and world building fell a bit to the side with the strong focus on the story. The main character was an okay enough character, although I never fully warmed up to her. The romance fell flat for me as I kept being bothered by a situation that happened between them earlier in which he violated her privacy in a pretty bad way and then almost jokingly shoved that fact in her face. I also was a bit annoyed how people kept insisting the main character trusted them instead of just explaining what they knew or what their plan was. The world building is pretty limited, but I did like the idea of magical cities. Magic Born is a decent set-up of this new series and if you’re in the mood for an urban fantasy book you might enjoy this one. sadly it just didn’t pull pull me in.

What’s the last book you read that didn’t fully work for you?