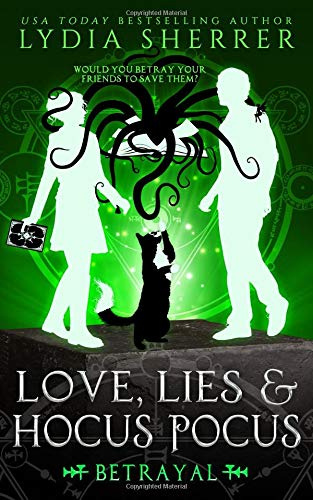 Blurb:
Would you betray your friends to save them?

It has been months since Lily Singer’s harrowing adventure in England, yet there has still been no word of her father or Morgan le Fay. Far from being able to relax, Lily has been kept busy doing the last thing in the world she ever imagined: dating Sebastian Blackwell.

Insanity must run in her family.

Things start to get interesting—that is, bothersome and entirely inconvenient—when former beau and FBI agent, Richard Grant, asks for help investigating a series of occult-related murders. Lily would rather decontaminate Sebastian’s mold-ridden car than open that can of worms, yet she might not have a choice. For a whisper has spread throughout the magical underworld—a rumor of creatures that will pit friend against friend and resurrect shadows from the past.

Love, Lies and Hocus Pocus: Betrayal is the fifth book in this fun urban fantasy series. It had been a while since I read the last two books, so it took me a while to get into this book. Luckily the author added enough hints and mentions of pasts events that I quickly got brought up to speed again. The start of a bit of a romantic scenes and while I loved reading it, I felt like the story really starts when we hear of the trouble that’s going on.

I had expected the plot line to go on with the same evil guys that book 4 was about, but they have disappeared and there is no word about them. A new mystery pops up with witches who are causing trouble in their city. Or maybe it’s all related after all, but that isn’t clear yet by the end of this book. The plot line was an interesting one and I liked how it tied in with Sebastian’s backstory. I felt like it really added something to his character, but I also felt so bad for what he has to go through in this book.

It was fun to be back in this world and spend some time with these characters. And see how Lily and her friends deal with this latest threat. There is character interaction, but also action and a bit of mystery. And magic ofcourse. I really like the magic system in this world.

I liked how we got to see this further stage in Sebastian’s and Lily’s relationship. They are sort of dating, but things definitely don’t go as smoothly. I think it makes sense that they are clashing at times, although at some times I wish Lily stopped thinking about agent Grant and comparing Sebastian to him. It’s almost like she wants to change him at times, but hey I think that’s part of her character arc and struggles. And throughout the book their relationship keeps having those ups and downs. There are some really low moments and also some awesomely perfect moments where you really feel their connection.

The ending is a bit of a cliffhanger ending and I really am curious what’s going on there. And Sebastian has to make a difficult choice and I am just not sure how they will deal with the consequences. I am already looking forward to the next book.

And Sir Kipling is awesome again as well in this book. I really like this talking cat that plays a big role in each story. I like his snark, but most of all I love how she is always by Lily’s side. I also liked how this mystery ties in with the novella Cat magic, I was hoping that would be the case and having read that novella I enjoyed the few references back to it.

And there’s also a reference to a character that gets introduced in the prequel novel A Study in Mischief. So it was fun to that character pop up in the main books as well. For those who haven’t read the novella’s all the relevant details are still mentioned so you don’t miss anything.

In this book we get to learn a bit more about the demons and I liked how our knowledge of that part gets expanded a bit. I also enjoy seeing more of the wizard powers and the fae.

To summarize: I really enjoyed this latest installment in this fun urban fantasy series. Lily and Sebastian have a lot to deal with in this book, not only relationship struggles, but also a mystery surrounding a group of witches that is causing trouble. There are demons involved and it was interesting to learn a bit more about those. I also enjoyed the references to events that happened in the two novella’s and how those tie in with this book. And Sir Kipling is a lot of fun to read about again as always. And while I like his snark, the moments he really stands by Lily are my favorite. Another great book in this series, it ends with a bit of a cliffhanger and I am curious to see how they will resolve that in the next book.

Huge sale on the first 4 books! 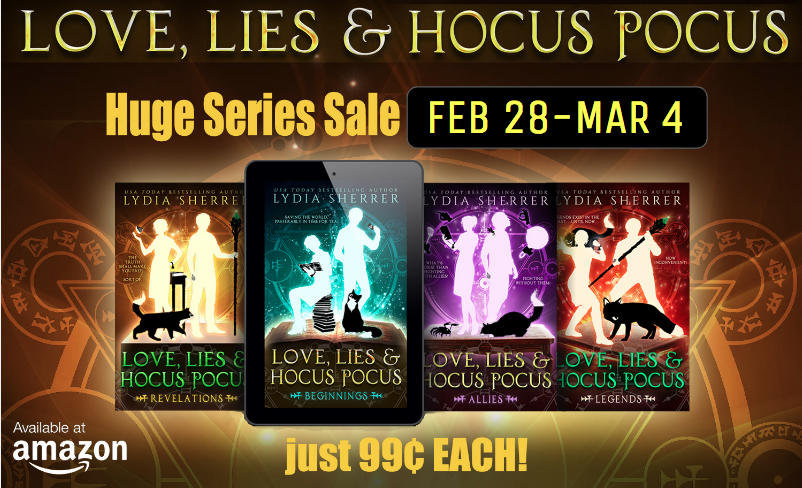 The author is running a huge sale on the whole series to celebrate the release of book 5. If you want to check out this series, now’s the perfect time to do so as each of the first four books are only 99 cents.

Tell me about one of your favorite animal characters in a fantasy book?