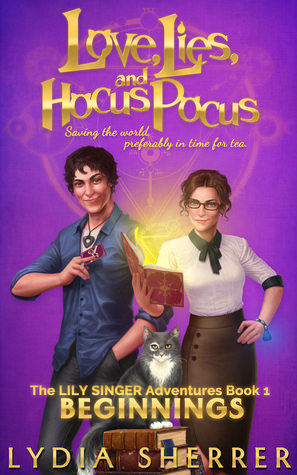 Blurb:
Saving the world is such a bother when it makes you late for tea.

By day, book-loving wizard Lily Singer manages library archives. By night? She sleeps, of course. In between, she studies magic and tries to keep her witch friend Sebastian out of trouble. Much to her displeasure, he finds it anyway and drags her along with him.

From unmaking ancient curses to rescuing a town lost in time, Lily and Sebastian fight to avert magical mayhem. Meanwhile, Lily s mysterious past begins to unfold a past hidden from her by those she trusts most. Will she be able to discover the truth despite them?

Beginnings is the first installment of the Lily Singer Adventures urban fantasy series. Full of unexpected twists and snarky humor, this story has been known to cause: loud snorts of laughter, inexplicable craving for tea, and loss of work productivity. If you enjoy magic-filled adventures like Harry Potter and Sabrina the Teenage Witch then you’ll love Lydia Sherrer’s delightful new series. Pick up Beginnings to enter your magical escape today!

My Review:
This was such a fun read and I am so glad I picked it up. I heard about this book in one of my facebook groups, added it to my wishlist and then grabbed it a few weeks later when I saw it was free. Before I finished this book I had already bought book 2 as I already knew by then I wanted to continue this series. Love, Lies and Hocus Pocus Beginnings is a fun read filled with adventure and magic set in the current day world. I quickly got immersed in this work and had a lot of fun reading about Lily and Sebastian their adventures.

This books is split up in three parts, first we have adventure surrounding a ghost that Sebastian and Lily work on. Then we get an interlude, which are a few chapters form Sebastian his point of view which actually serves as the set-up for the third part where we go back to Lily her point of view. While I was a bit surprised at first when I saw epilogue at 30-40% in the book, I thought the three part set-up worked well here. I think they are officially labeled as two episodes, so you basically get two adventures in one book. I liked getting to know the characters a bit in the first part and then seeing Sebastian his point of view was so fun as we learn a lot more about him as a character and his magic, which are all things Lily doesn’t know yet.

The book focuses on Lily and Sebastian. Lily is a wizard and a librarian. She was quite the interesting character, she’s a bit strict, studious and prim and proper as well. She likes to bake and drink tea. She was a tad too serious at times, but I could relate to her and Sebastian was just the perfect character to work alongside her as she’s such a contrast to her personality. Sebastian is charming, easy going and likes to make jokes. Or at least he acts that way, his point of view really gave some insight in his personality. I liked seeing how Sebastian got Lily involved in all kinds of trouble, but I am pretty sure she doesn’t really mind even though she pretends to at times. It was a lot of fun to follow the adventures of these two and I feel like we got a good idea of their personalities and some topics are touched upon that I am sure we’ll learn more about in later books. There is still a lot about them we don’t know, but I hope we get to discover that in later books. I already want to read more about Lily and Sebastian.

And then there is the world building, which is so expertly done. I loved getting immersed in this world. It really felt like the author thought this all out, how the magic worked, the wizard society and even the spells and artifacts we come across. It felt like the magic made sense and had rules in how to guide it. It was a bit confusing at first what the difference was between witches and wizards, but I felt that getting Lily’s point of view helped to clarify what wizards were and then the chapters form Sebastian his point of view gave me a better insight in what witches were. I like how both where very different and while the whole wizard things sounded cool, I thought maybe the witch thing was even more interesting. I liked feeling like this world and the magic in it made sense and was all thought out. And I just wanted to know more and see more of the magic. I also liked how while there was magic it also took place in the normal world, it has a bit of an urban fantasy feel when it comes to that.

To summarize: I can’t say enough good things about this book. It grabbed my attention quickly and I got immersed in this book and the world the author had created and didn’t want to leave. I ended up ordering the second book before I even finished this one as I knew I wanted to continue with the series halfway through this book already. This book is a lot of fun, there is magic and artifacts, wizards and witches and more. It follows the adventures of Lily and Sebastian, they are almost opposites in their personalities, but they are so fun together. Their personalities sometimes clash, but it also felt that due to their opposites they worked well together. I felt like I got feel for both their personalities as this book is split up in three parts and the middle part is from Sebastian his point of view while part one and three are from Lily her point of view. This also helped to get to know more about both wizards and witches. But at the same time there’s so much more to know ad I hope to learn even more about these two in the next books. And the world is so well crafted, it felt like things made sense and like the author really thought things through. I can’t wait to read the next adventures of these two!