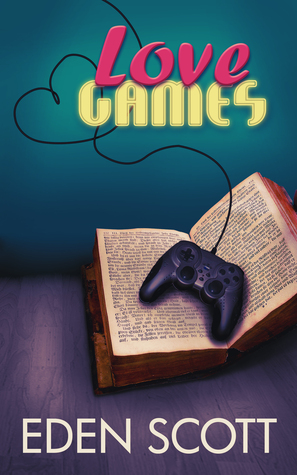 Blurb;
Technology-challenged historian Regis is on a mission of mercy: his miserably pregnant cousin, Penny, needs a diversion and the only thing that will satisfy is the latest version of a video game, Dead Knights at Castle Kill.

When Regis braves the aisles of a video game retailer, he’s swept off his feet by Mars, the tall, dark, and gorgeous salesclerk who works there. But there’s very little chance that such a savvy gamer would ever notice a man who can barely use his computer.

Deciding the obvious solution is to fake it, Regis enlists the aid of his cousin to convince Mars he’s a high-level gamer. The plan works perfectly right up until Mars invites him to a prestigious gaming conference, where even Regis’s high IQ isn’t enough to fake his way through dozens of real gamers—and will definitely cost him the man he’s been lying to the whole time.

This was one of those books were I had completely wrong expectations and I went in expecting a totally different story. Which made it hard to enjoy the story for what it was as it just wasn’t what I had expected. I was hoping for a fun M/M romance were one of them is a gamer and the other one not. What I got was a book were the gaming references that were there annoyed me instead of delighted me and it was rushed and leading up towards the sex scene at the end. While I knew it was a novella, I didn’t realize it was this short. It was hard to care or get to know the characters in so little time.

So I am a casual gamer, it’s one of my few hobbies next to reading and I like reading books that deal with gaming as it gives me that specific feeling of being able to relate to the topic and know what they are talking about. While leaning about new topics or hobbies is fun, reading about hobbies you have as well is fun too. btw if you want a book where it’s obvious the author knows what she is talking about and is an avid gamer herself check out Owl and the Japanese Circus by Kristi Charish. Okay so my issue with how the gaming topic was handled in Love Games? It felt off, like the author didn’t fully know what she was talking about and threw some random terms around making it sound awesome and like it meant something, but it wasn’t. Then there is so much focus on the gaming equipment and even so I still had no clue on which console this game was. And the expansion of the game is very pricey and needs to be bought in a shop? Nowadays all that goes online and is often downloadable once you buy the main game and usually expansion aren’t that pricey either. Also for most gamers it’s about the game, not the equipment to game. Sure it’s nice if you have a nice computer or console, but what’s the most important thing is, is which games you play and why you like those games. So all in all I couldn’t relate to the gaming aspect and that was disappointing. Towards the end it makes a bit more sense, but it was just sad as I had gotten my hopes up and I didn’t got what I expected.

The main characters are okay. Everything is written from the point of view of Regis, a history buff. He has to go to the gaming store to buy a game for his pregnant cousin and then meets Mars and it’s lust on first sight. Regis was a nice character, we don’t get to know that much about him, but overall I liked him. No there is no unnecessary drama and the misunderstanding/ lie plot is actually pretty mild. I kept waiting for Regis to admit he lied and I didn’t like the fact he did, but it all turned out well in the end I guess. There is a scene towards the end while he does jump to conclusion, he was still able to think and act rationally and I liked that. We don’t really get to know Mars that well, although we do know that he is muscled and what his hobbies are. So we do get a feel for him, but I just didn’t fully connect to them. I did like Regis his cousin and how she kept telling him he had to admit he lied, I totally agreed with her.

Because I felt like I didn’t fully connect with the main characters it was also hard to feel the romance. It went quite fast, but then again they never claim to be in love. They are just taking it one step at a time. They like each other and they end up in bed. They also go on a date or two, trying to get to know each other. While there isn’t a lot of details and depth it was hard to really feel the romance and it developed a bit fast.

Then there is the ending, while it was kinda fun and made sense looking back, it also felt stupid and made half the plot or hopes I had irrelevant. And I don’t know, it was a nice twist, but I just wish it was different. It does make sense in a weird way and does explain some things.

To conclude: this book was so different form what I expected it left me a bit disappointed and frustrated. If you are looking for a quick and short M/M romance with some sex and just enough story to make it believable, give it a try. if you are looking for a fun romance where games play a role, look further. I had a hard time enjoying the gaming aspect as it didn’t feel realistic and I had a feeling the author didn’t know that much about games. The book is really short and a bit rushed at times. The main characters were nice enough I guess, but there isn’t really time to get to know them, it’s more about meeting someone, feeling that spark and seeing what comes next. The plot and romance is pretty straightforward, there is no unnecessary drama or misunderstandings, just some lies that get cleared up towards the end. And an ending that surprised me a bit, but also annoyed me a bit. All in all this just wasn’t for me, I expected something different and it just fell a bit flat.

How important are expectations about a book and how can the influence your enjoyment of a book?