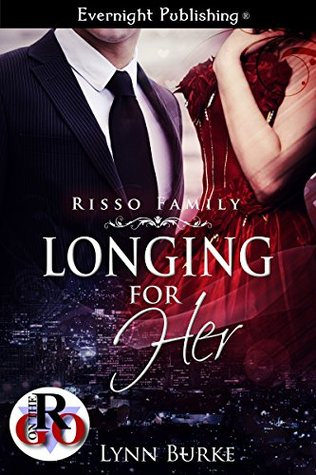 Longing for Her (Risso Family #2)
by Lynn Burke

Blurb:
Straight-laced Cole Risso has longed for his sister’s bohemian best friend Gwen since he first laid eyes on her as a kid. Now, as future patriarch of the Risso Family, he’s expected to marry well. A free spirit and unconventional daughter of a pot-toking hippie hardly qualifies.

When one night of giving into temptation ruins them both for any other, Cole and Gwen are faced with a decision—love the other enough to let them go, or defy family expectations and fight for their hearts’ desires. No matter the decision, their choices have the power to destroy all they hold dear.

I read the first book in this series a few months ago and enjoyed so when I was offered the rest of the series for review I jumped on the chance to continue this series. The Risso Family series is great for when you’re in the mood for a short hot romance. I like how this book ties in with the previous book, the main characters from the first book make an appearance and the focus is this time on Lia her best friend Gwen and Lia’s brother Cole. These two have been in love with each other for quite some time, but after they had hot sex 3 years ago Gwen has been trying to avoid Cole. Now that Lia and Ryan, the main characters of the first book, are going to marry Gwen has no way to avoid Cole although she sure as hell tries.

Cole and Gwen made for quite the couple after their hot sex 3 years ago they both have been struggling to forget that night and continue with their life and both failing. Cole has tried to apologize to her for what he said, but she keeps avoiding him. he’s sworn off women in general as he only wants Gwen, while Gwen jumps into bed with everyone she can find, but is unable to get an orgasm. The wedding makes it difficult for them to stay apart.

The conflict in this book focussed on how Cole his father disproves of Gwen and he has clearly let Cole know, hence why Gwen avoided Cole since the sex three years ago as she thinks she’s not good enough for him. Cole is the golden son who always does everything right and follows in his father’s footsteps and doesn’t quite know how to say no to his father. I liked seeing Cole realize that what he and Gwen had was worth fighting for, but I thought the whole conflict with them avoiding each other and the thing with his father got solved a bit too easily and I wasn’t entirely convinced of what happened. It just felt a bit too fast and too much.

I liked Cole and Gwen, although they both have some flaws as well. I really wished I could shake some sense in Cole, he knew he was in love with Gwen, but didn’t act on it basically because his father disproved, I wanted him to man-up and go against his fathers wishes and fight for what he wanted. I also thought there was a bit more potential to get to know the main characters, as it stays pretty shallow what we do know of them. I did get a feel for both of them, but would’ve liked more.

I liked how we got to know a bit of their past and get a feel of how well they know each other. that made it easier to accept how fast the romance moved in this book as they already know each other. I still think a few things went too fast and even felt a bit rushed, but overall it was fun to see these two overcome whatever was keeping them apart. I though they made a nice couple. There are some hot scenes towards the end of the book and things got wrapped up nicely.

To conclude: this was a short and hot romance. It features the main characters from the previous books as well and it was nice to see them back, while the focus was on a different couple this time. Cole and Gwen has stayed apart after a hot night of sex 3 years ago and now can’t avoid each other as Lia is going to get married. I did feel that these two already had a connection and we got some glimpses and info about their past, why it was easier to accept how fast the romance moved. The conflict got solved a bit too easily and I felt that some things moved a bit too fast and were a bit rushed, but overall it was a nice read.

10 responses to “Review: Longing for Her by Lynn Burke”