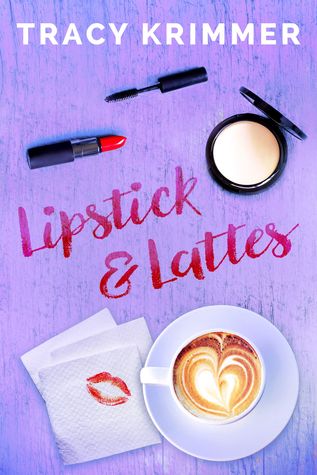 Blurb:
Whitney only needs two things to survive — a steaming cup of coffee and the opportunity to create art with makeup. But until her big break comes along, she’s stuck selling makeup at the mall.

While out at a nightclub dancing her cares away, Whitney catches a fleeting glance of a man she’s convinced is Prince Charming himself, but she misses her chance to talk to him. How will she find him now? Taking a wild chance, she places an online ad and her dreams come true when he appears.

Only fairy tales aren’t what they seem. As Whitney struggles to deal with the vast amount of changes in her life, her Prince is up against some losses in his, widening the gap between them. The only answer to their problems lies right in front of their faces. Can they figure it out before it’s too late?

Lipsticks & lattes is a fun and relatively short read. I had fun reading this one. I really like Tracy Krimmer her writing style, the story flows well and it kept my attention the whole time. I did have a few issues and at times felt like some topics could’ve used a bit more depth or expanding. There is quite a lot going on and at times it felt like not enough space to explore it all. We have Whitney who believes in fairytales and hopes for her fairytale romance, her love interest Ed, her best friend Hannah, her family and some tension there, some work troubles and Whitney finding out what she wants from life. There also were a few small plot points that were left dangling a bit and would’ve liked an epilogue to see how things ended up, although I can imagine that myself and there are hints in what direction things will go.

The romance was well done and I liked seeing their relationship develop. There are a few great scenes involving these two, like the latte scene, the tower scene and the scene on the beach which were some of my favorite parts. There was little drama and only a bit of conflict towards the end. I didn’t quite care for the conflict and didn’t get why one of the characters acted that way. And then the one who didn’t cause the trouble was the one who solved it, although it did fit the characters.

I did like the topics this book deals with. Whitney is having a steady job, it might not be the most glamorous, but she does pay her own bills. She isn’t quite sure what she wants out of life and what her dreams are, but she does her best to slowly figure it out. I felt her struggles were realistically and I liked seeing her work things through and start to think about what she wants in life. And while she isn’t there yet at the end of the book, I did have faith she will get there. There also are some family struggles that felt pretty real, although I would’ve liked to hear what her little brother ended up doing.

To summarize: this was such a fun read and I easily breezed through this book. I like Tracy her writing style as it makes the book flow well and I enjoy her style. I did have some small issues with a few things and some scenes or topics could’ve used a bit more depth. It is a relatively short read and I would’ve liked to see a bit more about some things. The romance is sweet and I liked seeing these two together, there are some great scenes involving them. I did have some trouble warming up to some of the characters and would’ve liked to understand some of Whitney her behavior a bit better at times. I did really like the realistic portrayal of some topics, like work, dreams and family and how they were addressed in this book. I liked seeing Whitney figure out what she wanted in life. All in all it was a fun read and I do plan on reading more books by this author.