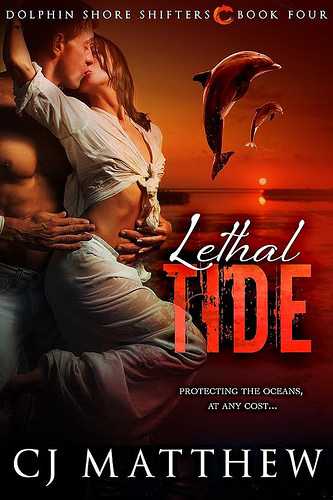 Blurb:
Dolphin shifter Conley Nash began his second three-year mission armed with a kick-ass agenda and an attitude to match. Since their team leader was killed, the men in SBW field ops have lost their nerve. Determined to restore the hard line, Conley can’t wait to show them how it’s done, facing down a greedy oil company in Long Beach. Until Conley meets his new partner…and finds his powers of persuasion need work.

First-time shifter Betty Brett can’t believe she finally made it into the male-centric field ops team. Since the first female agent was murdered, before Betty goes solo, she’ll spend four months teamed with an experienced operative. But did it have to be Conley? No matter how temptingly handsome he is, Betty refuses to take grief from a trigger-happy male and certainly not one whose knuckles drag the ground.

When the oil company resorts to violence protecting its illegal fracking operation, Conley finds himself out-gunned. Either he and Betty compromise, fast, or they’ll be dead before they can unravel the perplexing feelings they have for each other.

This series is so much fun to read. Not sure what it is exactly, but every time I pick up one of these books I wonder why I didn’t pick it up sooner as I always really enjoy them. Although this wasn’t my favorite book of the series, that honor goes to book 3, it was still a very enjoyable read. I know it took me weeks to read this one, but I did enjoy every second spent reading this one.

CJ Matthew really knows how to write a good suspense book. This series if first and foremost a romantic suspense, the shifter aspect is present and important as well, but it plays a less big part. Romantic suspense is one of those genres I am slowly reading more of, partly in thanks to books like this. They don’t shift to their dolphin form usually in the book as they stay in human form during their 3 year missions. I did like how some of their language and behavior hinted to their dolphin nature and their focus on saving the seas.

The suspense part is very well done here, I really like how we get the point of view of both a male and female shifter and then usually a point of view of one of the “evil guys” as well. It adds some tension and as the reader you know a bit more than either side, which really works. You know what both sides are planning, but aren’t sure how things work out. I liked reading about how the shifters were trying to figure things out. There is some action, but also a lot of thinking and talking and trying to figure out what really is going on. And there are some great twists and surprises that come to light at the end. I just would’ve liked a bit more time at the end to have everything sink in.

This book is told from the point of views of Betty and Conley. I have to admit at first I had big doubts about these two. At some point I had almost convinced myself they would both get a separate romance as I just couldn’t see those two together. So color me surprised when the author actually made it work between these two. They weren’t my favorite couple, but by the end I did like these two. They did make for a good couple and made the other see their point of view and they both got a bit less extreme in their views. This is a bit of the opposites attract type of romance and there’s a bit of enemies to lovers in there as well, as they argue a lot at first. But later on they start to appreciate the other point of view a bit more and it was interesting to see them both change their standpoint a bit, but not too much. It was very believable.

Conley was quite the unlikeable character at first, I couldn’t stand him. He had some opinions that rubbed me wrong and was quick to draw his gun and only think later. We slowly see him change over the course of the book, while still staying true to his character. Some of those strong opinions he voiced in the beginning quickly disappeared, while his focus on action first think later changed a bit during the book. I liked how gradual that change was and how even at the end he was still the same character, just a bit more open to research as well. I did like how he was with Betty and how we was the first to admit he might feel more for her and wasn’t afraid to tell her.

I did like Betty from the start as she preferred brains over action and liked doing her research. She seemed smart and capable, if a bit inexperienced with the action part of the job. I also liked we get some fun side characters, like River, Marina, Archer and even Seth. They all play a part and it was nice to see how they worked as a team and also befriended someone local. We also see a few characters from previous books, although these are only short appearances. This series can definitely be read as standalone, but as someone who reads this series in order I did like seeing the already familiar characters, like Gus, Rye and Libra. A few others are mentioned as well. I would’ve liked to see a bit more character depth at times and a bit more focus on the romance, but overall this was a very enjoyable read and I already am looking forward to book 5.

To summarize: this is such a great series. The focus is on the romantic suspense, but the shifter part adds a nice touch to the series. I liked how there’s action, but also a lot of thinking things through and figuring things out. There were some nice twists and revelations at the end. The couple of this book are Conley and Betty and at first I really didn’t see how these two would make it work, as they are almost opposites. But the author definitely convinced me and at the end I did think they made a nice couple. Conley was pretty unlikeable at the start of the book, but I liked how he slowly changed a bit and was more open to research and thinking as well, instead of just rushing in guns blazing. He had some well done character development. And I liked how Betty adjusted her attitude a bit as well. There’s a nice group of side characters as well and those who read the series in order will recognize some characters from previous books. But this series works great as standalone books as well. All in all another solid book in this series and I hope I can pick up book 5 soon!