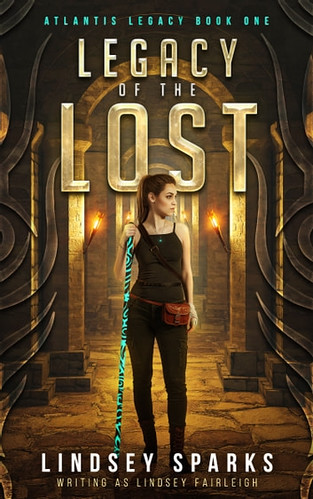 Legacy of the Lost (Atlantis Legacy #1)
by Lindsey Sparks

Blurb:
Some secrets are buried for a reason. She’s about to uncover the deadliest secret of all…

Anxious and reclusive, Cora Blackthorn uses online gaming as her sole tether to the outside world. Due to a condition that makes human touch crippling, she lives her life confined to a small island in the Puget Sound, never accompanying her mother on her tomb-raiding adventures. But when her mom sends home a cryptic SOS in the form of a mysterious package, Cora discovers the shocking truth behind her extraordinary affliction. Her condition isn’t an illness; it’s a gift not of this world.

Armed with a powerful, alien amulet and her mother’s journal, Cora heads to Rome on a desperate rescue mission. But on the way, she discovers that a secret society is hot on her trail, and she has no chance of outrunning them. Her only chance is to confront them head on. A clash within the twisty catacombs beneath Vatican City leaves Cora with a perilous choice: find her way through an ancient, deadly labyrinth and save her mom, or fail and die…

Legacy of the Lost is the first book in the captivating sci-fi adventure series, the Atlantis Legacy. If you like ancient mysteries, Greek mythology, treasure-hunting adventurers, and dynamic characters, then you’ll love this exhilarating adventure!

I picked this one up when it was free as it sounded like a good read. Then on a whim I started reading it, not quite knowing what to expect and got pulled into the story. I thought the first few chapters were a bit slow, but necessary as they set the stage and show what Cora’s life is like until it all changes with a package her mother sent her. What follows is her learning a big secret about herself and having to come to terms with it while avoiding the enemies on her tail and trying to find her mom.

I haven’t read any books quite like this. It has an unique mix of genres with the scifi element, but taking place mostly on modern day earth, it also has touches of mythology, plenty of adventure, there are puzzles and figuring things out as well as a touch of romance. It really was a great read and every time I picked it up I just wanted to keep reading. Every chapter ends in such a way that I wanted to know what came next. It was an exciting read with a good pace where things kept happening.

Cora gets quite the reveal about herself early on in the book, but I liked how she accepts most of it quickly enough and focuses on dealing with the current situation. I liked Cora and thought it was admirable how she dealt with it all. And while she seems to accept things quickly, she does struggle throughout the book with the truth about herself. I thought this was well done and felt realistic without slowing down the pace. She was an interesting character and I enjoyed reading about her. Her gaming background was fun and I liked how she used her gaming knowledge a few times in this book to solve puzzles.

I liked the plot and the way the plot seems to focus on finding her mother, but there’s so much going on along the way as well and in a sense it feels just as much about Cora finding out more about herself and uncovering more information. I liked the puzzle and adventure vibe of this book, seeing Cora deal with every obstacle on her way was a lot of fun.

There’s a hint of romance as well and I thought it was well done. It’s part of the book, but stays a side plot with the focus on the plot. I liked seeing Cora grow close to someone and being able to touch someone for the first time as that wasn’t possible due to her condition at first. I liked that they had known each other for a long time and how we get a feel for their history as well.

The world building was well done and sprinkled throughout the book. There’s still a lot we don’t know yet, but I like how we gradually learn more throughout the book. I though the mix of mythology and scifi was well done and I look forward to learning more. There were quite a few flashbacks/ memory scenes that played out, but I thought it worked well here for the most part.

To summarize: This was a great read, it’s well paced with plenty going on. I liked the puzzle adventure packed vibe and seeing Cora deal with all the obstacles on her way on her quest to find her mom. This book is also in a large part about Cora finding out more about herself after a big reveal toward the end. I had a great time reading this book and wanted to keep reading. There’s a bit of romance as well, which I thought was well done. I liked the friends to lovers vibe of their romance and they way things developed. The world building is interesting and well done. I already bought book 2 and I look forward to reading it!

4 responses to “Review: Legacy of the Lost by Lindsay Sparks”