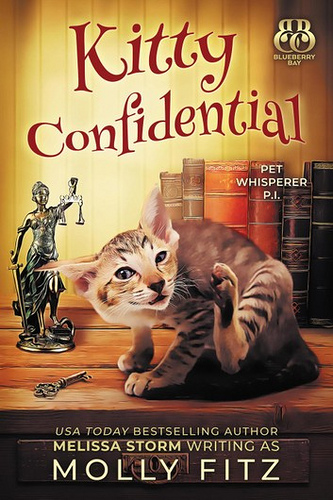 Blurb:
I was just your normal twenty-something with seven associate degrees and no idea what I wanted to do with my life. That is, until I died… Well, almost.

As if a near-death experience at the hands of an old coffeemaker wasn’t embarrassing enough, I woke up to find I could talk to animals. Or rather one animal in particular.

His full name is Octavius Maxwell Ricardo Edmund Frederick Fulton, but since that’s way too long for anyone to remember, I’ve taken to calling him Octo-Cat. He talks so fast he can be difficult to understand, but seems to be telling me that his late owner didn’t die of natural causes like everyone believes.

Well, now it looks like I no longer have a choice, apparently my life calling is to serve as Blueberry Bay’s first ever pet whisperer P.I while maintaining my façade as a paralegal at the offices of Fulton, Thompson & Associates.

I just have one question: How did Dr. Doolittle make this gig look so easy?

I love the premise for this book, so I bought it on release day and didn’t wait long to start reading it. Kitty Confidential is a fun quick cozy mystery read about Angie who after a near death experience has the ability to talk with animals. The cat from a women who recently died tells her his owner was murdered and she decides to help him.

I had fun reading this book. I liked the premise of the main character who solves mysteries alongside the animals she encounters and her relationship and interactions with Octo-Cat were fun to read. That’s probably my favorite part of this story. Octo-Cat really sounds show I imagine a cat would talk and he has quite the personality. He is a bit rude at first and used to his luxurious lifestyle, but I liked seeing Octo-Cat and Angie grow closer over the course of the book.

Sadly the mystery was a bit of a miss for me. There was very little investigating, Angie decides on a main suspect at the start and basically sticks with that. She asks some questions at her work place about the murdered women and notices some suspicious things, but that’s about it. The mystery had a good set-up, but the way it progresses didn’t keep my attention. I guess I just would’ve liked a bit more investigating and guessing and more discovering about what happened. There is a bit of a twist, which was a nice touch, although I managed to predict it. I also thought a few reasoning were a bit strange and some of the things Angie thought or decided just didn’t quite make sense to me. The book just felt a bit too short and the mystery not expanded and in depth enough.

Angie was a nice enough main character I liked how she studied multiple things and wasn’t quite sure what to do with her life, but she also seemed happy enough with her life. I like how she took care of Octo-Cat and quickly believed him about the murderer. I did think she was quite rude to a side character at some point, especially as I thought her conclusion was a bit far fetched and the way she confronted that person was just wrong. Angie sure could be a bit impulsive at times.

There are a few side characters, but the focus mostly stays on Angie and the few co-workers at the place she works and Octo-Cat ofcourse. Octo-Cat could be quite annoying at first, but I did like him when he showed his nice side. It was clear he cared for his previous owner and wanted justice. Angie’s Nan also seemed nice. Her co-workers we get a bit of a feel for, some more than others. They weren’t really interesting tough, although there is a mention at the end that was kinda interesting.

To summarize: This was a quick and fun read with a main character who gains the ability to talk to to animals. I liked the premise of this book. The mystery didn’t fully work for me tough, there was little investigating and getting to know more about the murder/ motive ans suspects. Angie just asked a few questions while she was already at her work and noticed a few strange things, then jumper to conclusions. And didn’t really consider any other suspects, besides her main suspect. Some of her reasoning didn’t make sense to me. The whole mystery was pretty straightforward, although there is a bit of a twist at the end. It just wasn’t engaging enough for me tough and I wanted more depth to the mystery. Angie seemed nice enough, although I thought she was quite rude at times to a certain side character. Octo-Cat was fun to read about, although he was a bit rude and annoying at first, he have his nice moments too and I liked seeing him and Angie grow closer over the course of the book.

What’s the last cat character you read about in a book?