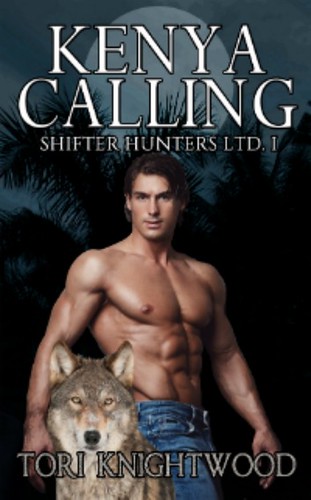 Blurb:
When two shifter hunters are forced to compete for the same job, sparks and claws will fly.

Successful in a male-dominated field, Ryenne doesn’t take shit from anyone—especially not from shifters. When a rich Kenyan businessman hires Ryenne to protect him and his village from a leopard shifter, she soon finds herself the target of the most cunning rogue she’s ever faced. Worse still, her new client forces her into competition with a sexy French shifter hunter who harbors a dangerous secret. Despite their rivalry, the French hottie is breaking down the protective walls Ryenne built around her heart after she lost her brother and father.

Will she uncover the identity of the rogue, or lose her heart along with the bounty? More importantly, will she bring the rogue to justice…or become his next victim?

The Shifter Hunters Ltd. trilogy is filled with action, adventure, and steamy love scenes. It is intended for readers aged 18 and up. Kenya Calling does NOT end with a cliffhanger but is only the first part of the story.

I read some of Tori Knightwood’s books before and I was curious about this series. I finally got around to reading it and I am glad I did as I really enjoyed this book. Kenya Calling is a fast paced paranormal romantic suspense book with plenty of action and a fast burn romance. I liked the setting in Kenya and there was a great twist later in the book. I wanted to keep reading and find out what was going on and how Ryenne was going to solve the case.

Kenya Calling is told mostly from the point of Ryenne, her brother got killed by a wolf shifter years ago and she became a shifter hunter because of that. She hates shifters and gladly hunts down the rogues who kill humans. In this book she is hired by a rich Kenyan businessman who wants her to hunt the rogue who’s been killing people in the town he lives. She also runs into some competition in the form of a French shifter hunter who has his own secrets. There are also a few chapters form Lucien, the french shifter hunter’s point of view, which were a nice addition.

This book was quite fast paced, at times I felt like it was a bit too fast. It’s not really the pace itself, it’s more how certain events are dealt with so fast that they lack the impact I would’ve liked to see. That’s actually my main complaint about this book, it was hard to really feel the emotions or romance because of how certain events lacked impact. It just all seemed to be dealt with a bit too fast and some events could’ve had a bit of a longer effect.

Another thing that bothered me was a small plot point late in the book about how Ryenne escapes a certain situation. It just didn’t make sense for me what happened and how she out-reasoned someone in a way that didn’t make sense. Or maybe that guy just wasn’t as smart, but it just seemed a bit farfetched to me what he did.

Besides those two things I really enjoyed this book. The fast pace works well for the most part and I wanted to keep reading. There is this case about a rogue leopard shifter they’re hunting. I liked how both hunters seem capable and they come up with some smart ideas and I liked how they handled the case. They also have some interested gadget/ weapons that they use. There’s a great twist at the end of the book that both made sense and was well done. It really makes you reevaluate the whole plot. I also liked how the story line in Kenya gets wrapped up, but it’s clear there is something bigger going on, which nicely sets the stage for the rest of the series and makes me looking forward to book 2.

Ryenne was a likable character. She is tough, but also has some soft spots. I liked seeing her interact with her business partner and it was fun to see her fall for the other shifter hunter. I liked how she kept her calm and was capable, but not reckless. I liked seeing her interact with some of the Kenyans they meet and how serious she took this job. It was fun to get to know a few of the side characters as well.

The romance fell a bit flat to me, it developed quite quickly. A bit too quickly for my taste. It made it hard to really feel their romance as after a few meals together and some mutual lust they jump into bed together even with a big secret that just got revealed. It just felt like that could’ve taken a bit more time and with how big the secret was I had expected Ryenne to struggle a bit more. One the one hand I am glad it wasn’t dragged out too long, but it just felt a bit too fast now. By the end of the book I did get a feel for their depth of emotions and they made for a great team, but I just would’ve liked a bit more build-up. I look forward to seeing how their relationship develops in book 2.

I like how we get a bit of a feel for the world with how there are different type of animal shifters and they can be born or bitten. There are rogue shifters, but it also becomes clear there are god shifters as well. And then there are the shifter hunters who hunt the rogue shifters. There is a bit of an overarching plot line set up and we only get the first few hints of a mysterious group here that will probably continue to learn more of in future books.

To summarize: this is a fast paced paranormal romantic suspense book. Ryenne is hired to hunt a rogue leopard shifter in Kenya and has to compete with a hot french shifter hunter with whom she falls in love. I enjoyed the story and following Ryenne along as tries to solve this case and figure out who the rogue shifter is. There is plenty of action as well as twists and turns. I just felt the pace was a bit too fast at times, but mostly it was that some scenes lacked impact. I liked Ryenne, she was smart and capable, but also had her soft side. It was fun seeing her interact with some of the Kenyan people she met. The romance developed quite quickly and I didn’t fully feel it, although by the end I did got a bit of a feel for the depth of their feeling. It’s nice how the Kenya rogue shifter plot line gets resolved, but there is something bigger going on which makes me look forward to the next book.