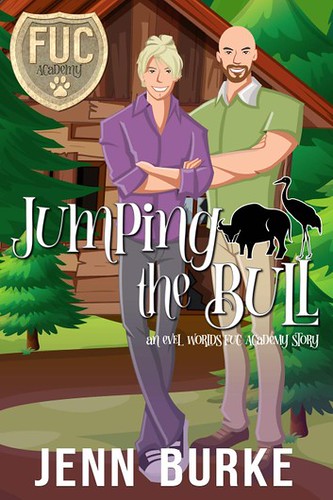 Jumping the Bull
by Jenn Burke

Everyone who looks at Ben and sees his six-foot-plus, muscular build assumes he’s in construction. Or the military. Or something that requires brawn over brains. In truth, he’s a mild-mannered human resources professional—or at least he was, until he got laid off. Now he’s looking for a second career as a Furry United Coalition agent, to discover how truly badass he can be.

Oliver’s enjoying a second career too, from exotic dancer to the FUC Academy’s yoga instructor. Big, badass men like Ben are totally his type—but he’s sworn them off, because they’re never good news. Except Ben is defying all of Oliver’s preconceived notions and making him wonder if maybe this bison is just the right type of badass for him.

When an undercover mission needs a bison shifter, Ben jumps at the chance to put his training to use. A twist of events forces Oliver and Ben to pretend to be married…which leads to an invitation to work for the bad guy on his bad guy ranch doing bad guy things. There’s no way they can pass up the opportunity to infiltrate the criminal operation.

Even if they’re a recruit and a civilian instructor who barely know what they’re doing.

And even if there’s only one bed waiting for them.

Jumping the Bull is a fun short romantic read about a bison shifter and a whooping crane shifter that fall in love with each other. I liked reading about these characters and the trouble they go through in this book. It was a fun short read and I enjoyed reading it.

I thought it was well done how even with the fast pace and short length of the book it rarely felt too rushed, although I wouldn’t have minded a bit more build-up and explanation of some topics as now everything did go a bit too fast for my taste. It was well plotted and paced with every scene contributing something to the story. There is the romance plot line as well as a bit about the academy for shifters they attend and a short suspense plot line about a bad guy they have to get close to. It all combined into an enjoyable read.

While it is a pretty short read I thought the author did a good job giving the reader a feel for both characters and their romance felt believable even though it skipped over some of the getting to know you scenes. I really liked these two together and I liked we got to see a bit of them together during the book as they worked together to catch the bad guys. There is one steamy scenes as well. Both were interesting characters and fun to read about. I liked the last chapter which worked as a bit of an epilogue and nicely wrapped things up.

I haven’t read any other stories set in this world. It’s a world based on one of Eve Langais’ series where other authors can write stories from what I understand. This one was easy to read as a standalone, all the relevant information about the FUC organization and academy was here. I liked the unique shifter types this book had and how the author make sure to show some of their animal characteristics in their human form as well. There are even multiple shifting scenes in the book with them using their animal form plenty.

To summarize: This was a fun romantic read about two shifters who fall in love. I liked the set-up and the way the story progressed. It was a pretty short read and while the author definitely made it work, there were a few places I would’ve liked a bit more build-up or see some topics explored a bit more. The romance was believable and I liked these two together even with the fast set-up and progression, they were cute together. I liked how I got a good feel for both characters their personalities. This one works great as standalone if you haven’t read any of the other books set in this world. The unique shifter types were fun to read about and I liked how their shifter side shows in their human form a bit as well and we also get to see scenes with them in animal form. I would definitely recommend this one.

4 responses to “Review: Jumping the Bull by Jenn Burke”