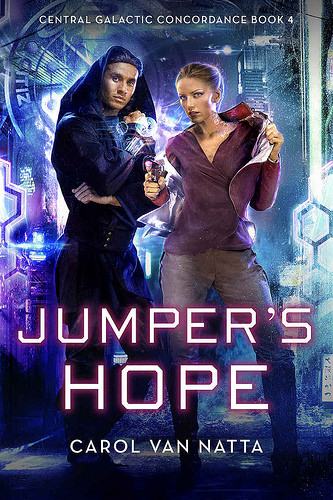 Blurb:
Reunited lovers must outwit a ruthless government agent, or their rumored deaths will be real this time.

Two retired elite special forces veterans discover their battles aren’t behind them after all. Someone considers them loose ends, and will stop at nothing to erase their knowledge of a secret government project. Their service left them both with wounds that will never heal. Do they still have what it takes to survive?

Kerzanna Nevarr’s elite special forces days of wearing Jumper mech suits and piloting Citizen Protection Services’ ships are long gone. The dark legacy of her service forced her to learn to live a quiet life. And she had to do so alone, without the lover who died before her eyes.

Jess Orowitz, veteran of CPS’s secret spy organization, Kameleon Corps, made the mistake of trusting his superiors. He’s paid a horrific price—fractured memories, constant headaches, and the death of the only woman he ever loved. Retirement on a quiet farming planet has kept him in an emotional deep freeze, but safe.

But now, Kerzanna is being hunted for reasons she can’t guess, and even more stunning, the man who helps her escape is Jess, her supposedly dead lover. For Jess, discovering Kerzanna is still alive is only the first of the lies and betrayal he uncovers.

Worst of all, their hunter is someone with CPS intel and lethal resources. Someone who believes the only obstacles standing in the way of success are one broken-down ex-Jumper and a fractured Kameleon.

Together, are they strong enough to escape death one more time?

Hang on for a desperate race for survival in the far reaches of deep space—get your copy of Jumper’s Hope today!

Jumper’s Hope is an 82,000-word novel that is best enjoyed after reading the earlier books in the series.

I think this might be my favorite book in this series after Overload Flux or maybe it even is my favorite. Jumper’s Hope was such a good read. I liked how this one followed two entirely new characters again, but tied the plot in with the previous books mainly through some CPS related plot lines and the same bad guy as the previous book. There is some action, space travel and also time spent on another planet. The two main characters are great and there are a bunch of side characters too.

This was a great fourth book to the series, the plot kept my attention throughout the whole book and I liked how this book had multiple different settings, but it all progressed in way that made sense. And there are some great twists and reveals. With how a character we only heard about makes an appearance and how her influence brings the characters together again and sets them on a new course. And I also liked the part at the end that takes place in Ridderth. I felt like a I got a good feel for this city.

It was interesting how this was the first book in the series were none of the main characters have any minder talent. Jess is an ex Kameleon with multiple personality overlays stuck in his head. It was interesting how that aspect got handled. And Kerzanna was an ex jumper, a military divisions form the CPS. She ahs soem cybernetic implants left over and a disease that’s slowly killing her. It also was great how they both had worked for the CPS and now years later they realized the CPS definitely didn’t have their best interest at heart. I liked how they met each other again in this book and found their way together again.

I really liked Jess and Kerzsanna, they both have been through a lot and believe the other is dead. They had some past together and the others dead hit them hard. Now they finally have found a bit of peace when their lives are shaken up again and they discover the other is still alive. They get ensnared in some difficulties with someone who wants Kerzanna dead and somehow they land in even bigger troubles.

The romance was a bit of a slow burn. Even tough they find out they other is alive, they don’t just pick up where they left off, but slowly come to rely again on each other and only toward the end they finally get together again. I really liked them and their romance. They took some time to get over their shock and figure out some things that went wrong the last time, but I like how well these two understood each other and had each others back. There is a part where they can’t be too close and that really illustrates how much they care about each other and how difficult being apart is for them. I also liked the scenes were they confided into the other something about their past.

I also really liked Tuzan, with the way he got described and how he acted I found him a very likeable and quirky character. And I hope the author decides to give him his own book or novella and gives him a boyfriend as he really could use someone to stand by his side. I also liked how he fought for the minders and he was a minder himself and experienced the loneliness that came from it. At the least I am pretty sure he’ll make an appearance again in the next book as he seems to have an important role. And I am sure we haven’t seen the last of Jess and Kerzanna either.

There are also two other side characters that I think will have an important role going forward and I am so curious to see how that plays out. One of the last chapters makes me really curious about the role they’re going to play going forward.

The book is told mostly from dual point of views of Jess and Kerzanna, but there are also some chapters form the bad guys and his employees their point of views, which added some insights. And some chapters from other characters, which was handy and could add some information the main characters weren’t aware of. While this book could be read as a standalone, I wouldn’t advise you to do that as the plot is much stronger if you read the books in order.

This book is so important in terms of plot and world building, we not only learn even more about the CPS and their secret project, but also about Ayorinn’s Legacy. We finally get to know more about this legacy and get a feel for what it means. I feel like what they do here and are going to do is going to be an important part of this series. I also liked how through Kerzanna, Jess and Dixon we learn more about the jumper’s corps and the secret projects of the CPS.

To summarize: this was such a good book. I think it’s my favorite book in this series after Overload Flux. There is so much that happens and so many events that feel important, pieces that fall on it’s place and reveals and events that feel very important. I really liked Jess and Kerzanna, they both have been through a lot and believe the other is dead. It’s quite the shock when they discover that isn’t true. They get ensnared in some bigger issues. It was fun to have parts take place aboard a space ship and on two different planets. I also was quite fond of Tuzan and really hope we get to see more of him. It’s an important book in terms of story and world building and I can’t wait to see how the series continues after this. This continues to be an amazing series and every book manages to grab my complete attention again. I am a bit sad I am now caught up and have to wait for the next book to release.

Tell me about one of your favorite side characters in a book?