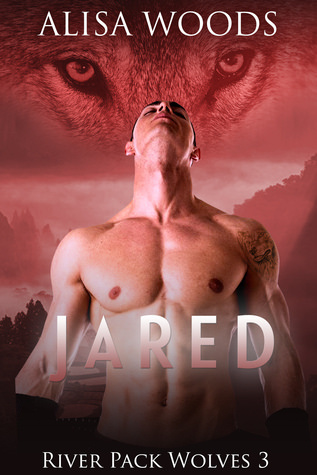 Blurb:
He was broken by the war. Her secret could destroy her family.

Ex-Marine sniper Jared River left the war, but the war never really left him. He’s a broken wolf who’s only good for one thing now—killing men. And he’s peering down his scope at Senator Krepky, the anti-shifter politician about to ruin the lives of all the shifters Jared loves.

Grace Krepky is the daughter of the Senator, a good girl with a passion for her father’s politics and who’s earned her way into being his campaign manager. Only problem? She’s secretly a shifter… and the clock is ticking until her own father inadvertently forces that secret into the open, ruining both their lives.

Jared’s all set to pull the trigger when he sees something shocking through the Senator’s glass walls—his daughter is a wolf. Jared puts his gun aside to go after the fleeing girl, but he already knows this can only end in one of two ways—either he’ll convince her to reveal herself to the Senator and stop his anti-shifter legislation, or Jared will have to assassinate her father.

If only she wasn’t making him come alive again…

Jared is a complete novel with HEA, the third in the River Pack Wolves trilogy (all standalone stories, but best enjoyed if you read them in order!).

Contains scorching hot shifters, alpha military heroes, and dark family secrets. Only readers over 18 should dive into the deliciously hot world of the River brothers.

AFTER THE RIVER BROTHERS: Check out the Wilding Pack Wolves series!

My Review:
Jared was a great ending to this trilogy and just as good as the previous books. I was very curious about Jared his story as we get to know little of him in the first two books. And I enjoyed getting to see his point of view in this book. This book finished the suspense storyline that continued throughout this series and it gets nicely wrapped up at the end. There also is a bit of a set-up for the spin-off series the Wilding Pack, which was nice.

This book does take a bit of a different take when it comes to the suspense element/ plot line. Before it was more military/ action like and here it takes a more political spin. I thought it worked and it made sense how this thing went as high up in the government. It also touches on some heavier topics like being different, being treated differently and people feared those who are different. I liked how things got wrapped up, although I would’ve liked to know what happened to the Senator now.

Jared is broken, he feels more dead than alive most days. The war damaged and changed him and ever since then he hasn’t been himself. Until he meets Grace. I really liked seeing the changes in Jared thanks to Grace. To see him smile again and allow himself to live. There’s this scene where Jared smiles for the fist time around his family and it really illustrates the change in him. And Grace knew almost nothing about the shifter world and Jared introduced her to that. And along the way she found a way to show her true self. It was amazing to see the character development these two go through throughout the book. And I really enjoyed reading about them and how good they were for each other.

The romance does develop fast, they only know each other for a short time and this book mostly takes place over a short period of time. But even so it never felt rushed and I really felt the connection, romance and chemistry between these two. They are just right for each other. There is almost no drama, but a lot of talking, sharing and being open with each other. Jared tells Grace eventually about his painful past and Grace doesn’t hesitate to ask when she doesn’t understand something shifter related. There also was a set-up with an ex from Grace and I am afraid that would bring some drama, but it was resolved very nicely.

I also like how we get to see the characters and couples from the previous books as well. The focus is on Jared and Grace, but we see glimpses of Jared his mom and the previous main characters. And I liked how each of these couples is so different and each character has their own personality. I also liked how Jaxson, Jace, Olivia and Piper, still felt like the same characters even now they were side characters. It’s really neat when an author manages that. It was fun to see all the River brothers find their happy ending.

This is a great paranormal romance series. I like how the author handles the shifter aspect, while also leaving enough space for romance and some action and danger. It’s a great mix. I also thought it was nice that the whole mate thing wasn’t as definite as in other books, yes they did feel and instant connection, but it was still their decision to mate. I would’ve liked to learn more about Grace her white wolf power, as it felt that never got fully explored. We do know they are rare and a few ways in which she is special, but I would’ve liked to learn more about this. Why these white wolves are rare, why she is a white wolf and how she is different from normal wolves.

To summarize: this was a great ending to the series! this book is just as good as the previous books and it ends the series on a high note and wraps things up nicely while also setting the stage for the next series. I really liked Grace and Jared. they are so good for each other and there’s a lot of character change in both of them. I really felt their romance, eve though it developed fast and I liked seeing them together. There are a few small things about Grace her wolf form that aren’t answered, but overall I like how the author handled the shifter aspect. This book was a good ending to this series and I hope I can start the Wilding pack series soon and I hope it’s just as good as this one!