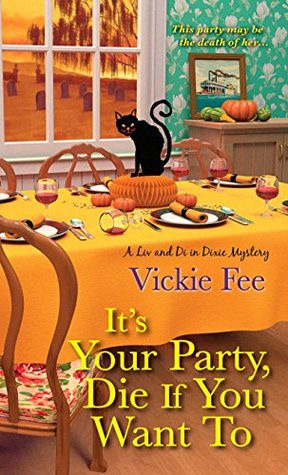 It’s Your Party, Die If You Want To (A Liv And Di In Dixie Mystery #2)
by Vickie Fee

Blurb:
Between a riverboat gambler-theme engagement party and a murder mystery dinner for charity, Dixie, Tennessee, party planner Liv McKay is far too frenzied to feel festive. Add to the mix her duties at the annual businesswomen’s retreat and the antics of a celebrity ghost-hunting diva, and Liv’s schedule is turning out to be the scariest thing about this Halloween—especially when the ladies stumble across a dead body in a cemetery…

Morgan Robison was a party girl with a penchant for married men and stirring up a cauldron of drama. Any number of scorned wives or frightened philanderers could be behind her death. As Liv and her best friend, Di, set out to dig up the truth, they’ll face the unexpected and find their efforts hampered by a killer with one seriously haunting vendetta…

My Review:
I received a free copy of this book through netgalley and voluntarily reviewed it

I enjoyed the first book well enough and decided to give the second book a try as well. Actually I was on the fence about continuing this series but the cover for the second book and the Halloween theme enticed me to give it a try. I am glad I picked up the second book, but at the same time felt like I ran into some of the same issues I had with book 1. it was a fun read, but it was lacking something to fully pull me into the story. Lots of small things that didn’t fully work for me or annoyed me.

Calling it a cozy mystery almost seems wrong, at times the book reads more like a slice of life or contemporary book. there is a lot fo focus on Liv her daily life, we get to experience what she does each day and I am glad we got more of a view into her party planning business. I am pretty sure the party planning business is one of my favorite parts of the book. I am a planner myself and there was something satisfying reading about Liv planning these parties and seeing it all come together. There were two parties in this book, an engagement party and a mystery dinner at the end. both were fun to read.

With all the focus on Liv on her daily life it feels at times like the mystery doesn’t get enough attention. Also the mystery itself just fell kinda flat for me. There are a lot of suspects but at the same time there is almost no evidence or clues or hints. And everyone, except for the police, seems convinced there is this one person who is the culprit and I still don’t get why. It just annoyed me everyone seemed so convinced she was the culprit. There is no evidence pointing in her direction or at least no more than in anyone else their direction and still everyone seems to be convinced she is the murderer. Except for the police who actually arrest someone else and everyone else is convinced she is innocent.

The mystery just kinda wobbled along without fully pulling me in. Then at the end Liv realizes who the murderer is, but the reader doesn’t get to know it until the last possible moment when it’s revealed to the other characters as well. I rather had known who Liv suspected when she pieced the pieces together and set up her plan. And then there is the police which never seems to get much further into the investigation, in fact it feels like the investigation and mystery mostly stands still until the end.

I do think it’s rather original that this book has Liv actually being in a marriage. In many cozy mysteries there is a bit of a romance element, but it’s usually it’s a couple falling in love, so reading about a married couple was a nice change. I did like them a bit more in this book, they just seem so normal? Which is nice and on the other hand I almost wished for some quirks or to feel their romance a bit more, but these two were so normal it was almost weird. The author does a good job of conveying a bit of the southern feel of this city, not sure if it’s realistic, but it felt realistic to me.

There are a lot of side characters and only a few of them really have a clear personality, so I had some trouble at first remembering who was who. It did get a bit better as the book progressed, but I still find it hard to remember all the characters. Which is also why the reveal fo the murderer fell a bit flat for me as it took me a while before I remembered who the character was. The Halloween theme was a nice touch and I am glad I read it this book around Halloween.

To summarize: while I did enjoy this book, I never felt fully invested in the story or the characters. I did like Liv her party planning business and we get to see a bit more of that in this book with two fun themed parties she pulls off. I also liked the slight Halloween theme of the book. The murder mystery fell a bit flat for me and I never felt particularly invested in it. There aren’t enough clues and hints to figure things out for yourself, the characters seem convinced a certain character was the murderer which just made me hope they were wrong as it was a bit much with everyone convinced she was the murderer. And when Liv figures out who the murderer is the reader doesn’t get her thoughts and only find out some time later who the murderer is. The book has a bit of a slice of life feel with how we get a good feel for Liv her daily life. It was nice, although it felt like the mystery did get less space because of that. It was interesting to read about a married couple for a change, although they almost felt too normal at times. It was a nice Halloween themed read, but some things didn’t fully work for me.

You can also find my review of It’s Your Party, Die If You Want To on Goodreads and Amazon

What are your favorite kind of jobs to read about?

17 responses to “Review: It’s Your Party, Die If You Want To by Vickie Fee”