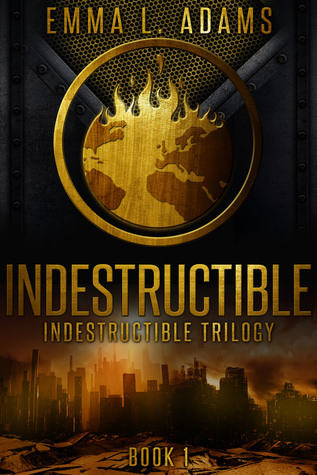 Blurb:
Two years ago, the fiends invaded, with a devastating explosion that split the world in two. Even now, energy blasts strike without warning, destroying everything in their paths. The fiends hunt anyone unlucky enough to escape.

My name is Leah. An energy blast killed my group. It should have killed me, too. Instead, I woke up alone in the wilderness, stalked by the fiends.

My only hope is the red-cloaked strangers who call themselves the Pyros. They can do the impossible and make flames shoot from their hands. Right now, my one chance for safety — and revenge — is with them.

But they’re keeping secrets from me. Like those skeletons hidden under their base. And the reasons I developed a psychic link with someone who can’t stand the sight of me — after he saved my life.

If I don’t uncover the truth about why the world ended the first time, my new safe haven might go up in smoke…

Post-apocalyptic normally isn’t really my genre, but the cover,the addition of magic and the fact that this one was written by an author I know made me want to give this one a try. At times it feels pretty much like a zombie apocalypse book, but then with fiends instead of zombies, but it’s also different enough. The inclusion of magic and the background on the fiends, made for an interesting story. The story flows neatly, it was fast paced and well written. There are some great action scenes as well, the battles were pretty cool with the fire and the large monster like enemies. It kept my attention and I did enjoy this book, but while I enjoyed it, I didn’t fully love it.

As this takes place in a post-apocalyptic, most of the focus at first is on surviving, but that’s really only a small part of the story. The begin scene nicely sets the stage, but at the same time I wish the story had started a bit earlier, so we could’ve gotten more of a feel for this group of people, I think the impact of the first scene would’ve been bigger. It also feels like we’re getting thrown in the middle of the story at times, there was so much that didn’t quite make sense or wasn’t explained and while I think that was partly intentional on the author’s part, I just wanted to know more. There’s also the direction the story takes at the end that I didn’t like, one of the things I don’t like reading about. And a decision they make towards the end of the book that felt so obvious like walking into a trap. The whole situation just made me uncomfortable.

Leah is a nice main character, but I never fully connected with her. Partly because the focus is so much on the story and due to the post apocalyptic world there isn’t as much focus on the characters and making friends. I did like her willingness to fight and do what was needed, but even with everything she had gone through she seemed a bit too nice at times. And I wasn’t quite sure which direction I wanted her to take, at times it seemed she would sacrifice everything for her friends, but while she killed the fiends she didn’t want to kill a man, even though what he had done was ten time worse than what the fiends had done in my opinion. Then there is this twist with her later in the book and what she is and I don’t know, I just didn’t really care for it and so many questions were left unanswered.

Beside Leah there are some interesting characters that make up the cast. I just wished there was time to get to know each other. The book is pretty fast paced, so that means there is less time to focus on characters and relationships. I did like Nolan, although there was a scene at the end that I felt could’ve had a bit more impact. Then there is the daughter of Murray, who was so innocent and it was kinda interesting to see a character like that in this world. I am a bit mixed about Cas, he is so mean and even when we find out why and how he’s hurting it just felt like too much. He and Leah are constantly fighting, but I didn’t feel like they were really forming a bond, which I had hoped would happen. Cas was just a bit too unlikeable and I wish he stopped still to think or talk a bit more.

The there is the world building. The main concept is pretty cool, a post apocalyptic world caused by energy blasts and big monsters that now roam the earth called fiends. Then there is the red sky and the fiends that hunt human and you have a pretty scary and interesting post-apocalyptic setting. My issue was that while it’s interesting it doesn’t make much sense, again I know we will probably get more answers later and it’s the type of story where you find things out alongside the main character, but I just wanted more answers. From why the fiend where really here, why they acted this way to what they eat to why they hunt humans to why the pyro’s base had all modern conveniences and how that worked as they only had a tiny island.

Then I kept imaging the fiends as some kind of magma elemental, which is probably my own fault,as they never got described that way, but it seemed weird they got killed by fire. Then there are the pyro’s and so much of what they are, why they have these powers and how they can cause fire was left unexplained. It also seemed weird that everyone is struggling for survival, but they have everything while they only live on a small island. There is also a lot that happened in the past that is relevant now, but we only get bits and pieces and it felt like I always knew just too little to fully make sense of it. the big bad evil guy seemed to have no motivation or reason and just seemed too stereotypical evil. Overall I just wanted to know more, but I probably have to be patient and wait for the next book.

To summarize: while this book is a bit out of my reading comfort zone I did enjoy it. The pace is well done, the story flows well and kept my attention. I liked it, but didn’t love it, it just seemed to be missing something for me or maybe it’s just that isn’t the genre for me. I liked the characters, but wish there was time to get to know them. The world building leaves a lot of questions open and while that’s probably intentional I just wanted to know more. I will be continuing the series and am curious to see where the story goes next as even with so many questions remaining I felt like a large part of the plot was resolved in this book already. I would recommend this book to fans of fantasy and post apocalyptic books who are looking for something a bit different and like figuring things out alongside the main character.

Do you like post-apocalyptic books? Why or why not?