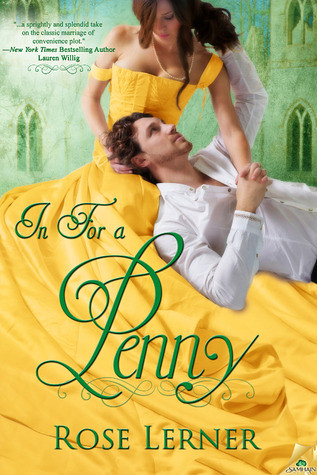 Lord Nevinstoke revels in acting the young wastrel, until his father is killed in a drunken duel. Never one to do anything halfway, Nev throws off his wild ways to shoulder a mountain of responsibility—and debt—vowing to marry a rich girl and act the respectable lord of the manor.

Warning: Contains kisses in the breakfast room, account books in the bedroom…and murder in the garden. Featuring a heroine who’s used to settling, a hero who’s used to getting what he wants without trying, and a love for which they’ll both have to fight tooth and nail.

One of my bookish resolutions for this year was to try and read historical romances, when I saw this book on netgalley I knew I had to give it a try. It had a pretty cover and was the first book in a series and I like the sound of the blurb. Because this is basically the first historical romance book I read that might have influenced/ coloured my opinion in some parts, so please keep that in mind when reading this review.

Because I am new to this genre, I felt like I stepped into a completely new world and way of telling stories. It was exciting and everything felt new and unique, while it might be normal for this genre, it all felt new to me. The intrigues and rules of that time and how everyone is expected to behave like a lady and lord and the fear for a scandal was quite fun to see and I really enjoyed reading this book. It did felt a bit slow at times, but only a bit. I did lose track of the plot a few times especially when it came to how Gregloss was close to Lowstone, the different roles of the owners/ lords and the tenants and the poachers. But while some of these parts where a bit confusing I was still able to follow most of the story and enjoy the book.

I really liked Penny, she has always been taught how to be a proper lady and tries to follow that image while still her true self slips through the crack sometimes. I liked her complex personality or how she knew more about the whole financial aspect than Nev and tried to be help him with that. New is also a nice character and willing to do a lot for those he cares about and thee’s a nice scene which really shows his character towards the end of the book when it comes to the tenants. Then there are some interesting side characters like Louisa, I really felt for her, she has it difficult and Nev can be harsh to her, although I liked how her plot line ended.

The romance totally worked for me, at first I was a bit hesitant as they marry for money, but it’s obvious there is more between these two and some real feelings. I loved how Nev changed his ways and tried to be the perfect husband for Penny and Penny tried to be a proper lady and help him however she could. There also is a great scene when they are caught out in the rain, that I really enjoyed. There was an issue of miscommunication later in the book, but I could understand why they didn’t talk about that because of their situation. I liked the romance between them.

The historical setting took some time getting used to. I hadn’t heard of certain terms and I had trouble following the plot in a few paces because of that. I wasn’t entirely up to date in my knowledge about this time period and how people lived and then there where things liked how Nev was a Lord and which role and responsibilities he had and while the book was pretty clear on most of these it still took me a bit longer to understand it all than a more frequent reader of this genre would.

To conclude: I really enjoyed this book! This was my first attempt at reading a historical romance book and I can say I definitely will be reading more books in this genre. The new genre was a bit overwhelming at times and my lack of knowledge led to some confusing and trouble following the plot in some parts, but overall it also made for an exciting read and I liked trying out a new genre. The characters where likeable and the romance worked for me, Penny and Nev where so right for each other. The historical setting got some time getting used to, but the story also felt fresh and new because of being new to this genre.

14 responses to “Review: In for a Penny by Rose Lerner”